Angela Power-Disney’s brand new website is up and running, and if anyone ever doubted her ability to write fiction, have a look at the landing page: 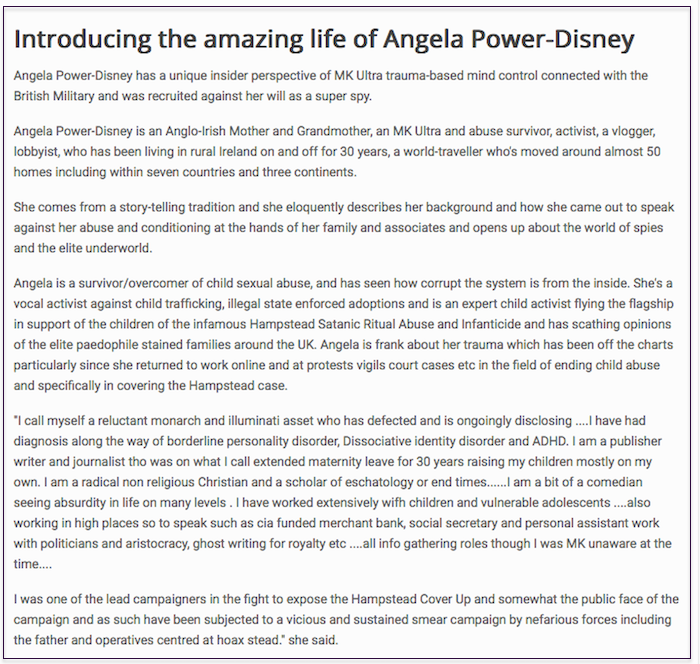 Looks like we weren’t so far off last year when we compared Angie to Baron von Munchausen; she really has seen and done it all! Allegedly and without prejudice that is.

We were especially impressed with her continuing inability to spell the name of this blog. (Angie, here’s a hint: look at the top of this page.) Spelling is so important for a wannabe journalist, or at least that’s what Angie told Mel Ve only a short while ago.

What’s next for Angie?

Angie’s new site looks like the beginning of a new chapter for the lovable nicotine-soaked compulsive liar, so we thought we’d dredge up our own in-house fortune teller, Mrs Know-it-all (not to be confused with Mrs Overall, the charming and delightful lady who frequents our comments section). 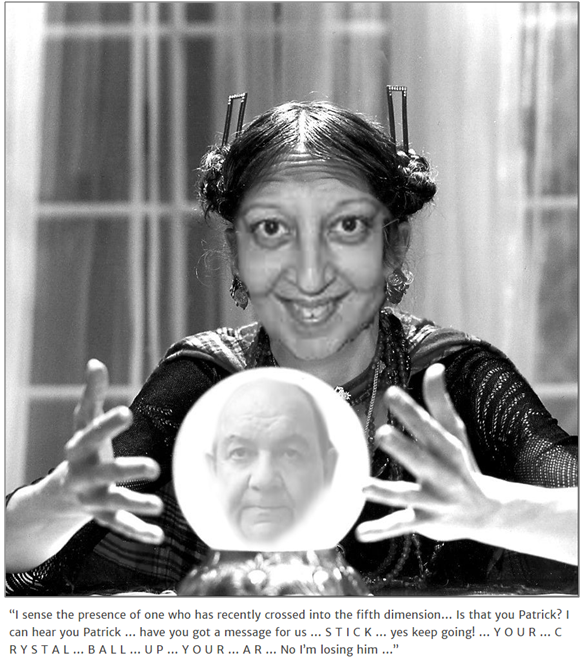 Here’s Mrs Know-it-all at a seance we held last November, when the troofer world was turned on its head by the devastating loss of Patrick “You can stick your ambulance up your arse” Cullinane. We crossed her palm with gold (she has an allergy to silver and refuses to accept currency, which she calls a “tool of the state”, go figure), and asked her what’s in store for Angie over the next few months.

What we heard will probably surprise you as much as it did us.

“Angie will come into some money…”

According to Mrs K, Angela is about to come into a bit of cash—a prediction which will no doubt come as a relief to Angela.

“Will she start some new charity scam?” we asked. “Or meet a new gentleman caller who hasn’t spoken to her neighbours yet?”

“Not at all, not at all”, Mrs K intoned, staring intently into her crystal ball. “I see…I see a piece of art. Art which she has somehow misplaced, perhaps at a friend’s house…strange, because she claims this piece of shit…er, piece of art has been evaluated by Sotheby’s at £3,000…now, why would she leave that behind?”

“You mean the painting she left at Jockney Rebel’s flat?” we asked.

Mrs K made a choking noise, which sounded suspiciously like a stifled laugh. “No…” she whispered, once she had regained her composure. “No, she is waiting for someone to come into some money…I’m seeing the word ‘c…o…m…p…o’ in my crystal ball, spelled out in cigarette smoke. Any idea what that could mean?”

“Compo? Maybe you mean the compensation Jockney is expecting to receive in her legal case?”

Mrs K nodded solemnly. “Tell this Jockey person to beware. Someone could be waiting to make a false claim against her…like that she damaged a £3,000 piece of art, and must pay for it….”

Her eyes rolled back in her head, and we were afraid we’d lost her, but after a few seconds Mrs K regained consciousness.

Mrs K’s voice grew softer. “And…a heart. Wait, no, I think it’s a card with a heart on it…a Valentine?”

We looked at one another, puzzled. Had Mrs K finally lost the last of her marbles? It was Ruby, the 47-year-old office cat, who finally broke the silence.

“You ninnies”, she croaked. “She’s talking about Miles Johnston. And Nina Valentine. Obviously.” And then she continued attending vigorously to her personal hygiene, as cats will do.

We were still in the dark.

But not for long: Mrs K brightened considerably at Ruby’s words, and said, “Yes! Yes, that’s it, the cat knows. Angela, Miles, and Nina. I see them…oh, dear God….” She covered her eyes with her hand.

We leaned forward. What was she seeing that was so unspeakably awful? “What is it?” we asked in unison. “Please, tell us!”

Mrs K whispered, “I see them in…in a large bed. Together”.

We gasped (again in unison, that’s how we do things at Hoaxtead Research HQ). “Seriously?”

“Would I joke about something as disgusting as that?” she retorted. “But maybe…maybe they’re not actually going to…you know. Maybe they’re just planning to do something together. Something else, I mean”.

“Like what?!” We were on the edges of our seats now, imploring our intrepid fortuneteller to reveal all.

“Something even worse,” she whispered. “I think…they’re planning to launch a YouTube series. It’ll be on Miles’ Bases channel…it’ll be about super-soldiers…thousands of views…oh, God, I can’t go on….” And with that, Mrs K packed up her crystal ball, tucked it under her arm, and scuttled out of the office.

We aren’t sure what to make of Mrs K’s strange predictions: was she really seeing into the future, or just making shit up (something she’s been known to do, we regret to say)? All we know is that we’ll be keeping an eye on Miles Johnston’s channels for the next while. We’ll let you know if we see anything. And in the event that Mrs K is right, remember you heard it here first! 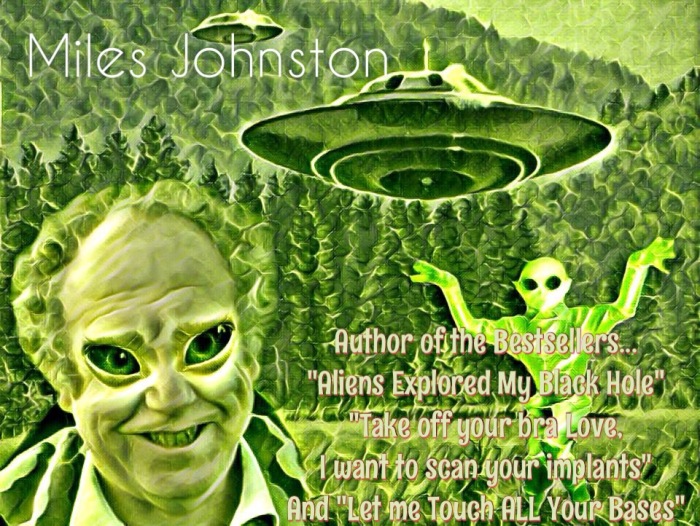 316 thoughts on “What’s next for Angela? Some surprising predictions”