The story so far…

The first post detailed Wesley’s false claim that the doctor had hired him and paid his way to Barcelona to look for land on which to start an “ethical / organic / ecologic CBD farm, with a retreat that specialises in medicinal / therapeutic cannabinoid treatments”.

This was bunk, to put it politely.

It turned out that Wesley had used emotional blackmail in the form of suicide threats to extort money from the doctor’s wife, Alex, convincing her first that he was being pursued by a Satanic paedophile ring which was trying to murder him, and then that he needed to get out of the country in order to be safe. Coincidentally, this sudden need to leave the UK occurred shortly after Wesley was arrested and questioned by London Metropolitan police over his role in promoting the Hampstead hoax and harassing innocent families.

When Alex and her husband finally decided to turn off the money supply, Wesley went into overdrive, calling and harassing them constantly from a phone with a “spoofed” number. To prove that the phone belonged to Wesley, Alex’s friend and security consultant Paul sent Wesley a series of texts stating that he would “kill” two of his “secret” Facebook accounts, one featuring a picture of his daughter, and one with a picture of an Asian boy. Angered, Wesley called back, thus confirming that his was the phone that had been used to harass Alex and her husband.

He’d been had, and he knew it.

Wesley’s next step was to slap up posts on all his various Facebook pages, mirroring them on his corresponding Twitter accounts, intimating that Paul was a danger to children, and that he and his wife had engaged in fraudulent behaviour (rather than merely having gone through bankruptcy proceedings).

Briefly, it seemed as though Wesley might be able to sway enough of his Facebook friends in his favour to convince the world that he’d done nothing wrong.

However, hours after the first of our posts went live on 12 September, an extraordinary thing began to happen: the post began receiving hundreds of shares on Facebook, and racked up over 7,000 views. The second post did almost as well. Word travelled, and suddenly it seemed that everyone in Wesley’s home town was aware of what he’d done.

By the time the second post began making the rounds on 13 September, it was clear: the tide had turned, and people were turning out to support Alex, Paul, and their spouses against the lies which were being spread about them.

Late that day, Wesley’s harassing, defamatory posts began to disappear. One by one, they vanished.

By Friday, 14 September, following a spate of phone calls to Alex, which she wisely declined to answer, Wesley had gone completely quiet.

Late in the day, we received the following screenshot lifted from a “buy and sell” page in Barcelona: Had we not been aware of Wesley’s use of suicide threats to control Alex, we would have been quite concerned. As it was, we reckoned he’d be back within the day.

Sure enough, whether someone claimed the reward for finding him or not, on Saturday his personal Facebook page had reappeared, indicating that he was still out there.

At time of writing, though, most of the defamatory and harassing posts are still gone.

A quick tour of his better-known pages shows that his most recent posts date back to Thursday, 13 September, the day before he “went missing” after spending hours barraging Alex with phone calls: 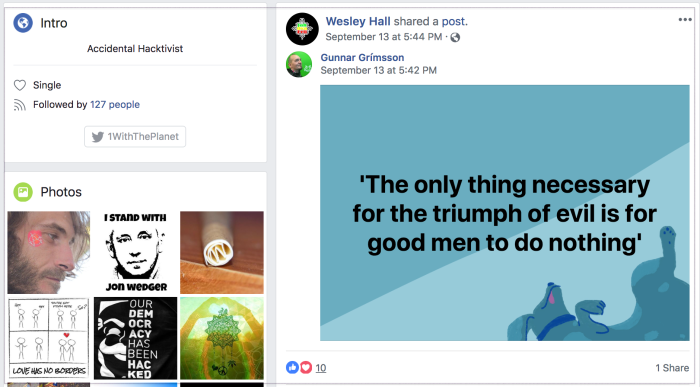 Wesley has backed himself into a difficult position, to say the least.

Spain isn’t such a fun place when you have no money; but the UK looks less than inviting, as we have learned that both Paul and Alex have filed harassment charges against him. At present he seems to have gone to ground, no doubt to consider his options.

We’ll continue to cover this story. 94 thoughts on “Where is Wesley Hall? A strange silence”