It seems those clever people over the Hoaxtead fence would like to put us right on a few statistics and school us in the art of advanced mathematics. Buckle up…

“80 people own roughly one half of global wealth”

“In America there are 45 million people – families – living in their cars, with 19 million children. There are another 25 million who are just homeless on the streets”

“Well, I think that there are probably about 56 people in America who are homeless”

“The report I read said it was estimated that 60 million people are homeless in America. I mean I can’t find the report, coz I don’t just get these things out of thin air.”

“I skim read most of it and then decided to post it immediately…I’m still in the learning process and not very good with numbers. My eyes just glaze over with maths etc. I see some of the patterns but even if I don’t understand it fully, I realise that it’s the truth and choose to share so others can benefit from it etc”

“I’ve been involved in the Hampstead case since February 2014”

“My Irish twin, 11 months older than me”

“There have been many signs pointing to the total destruction of New York and the start of WW3. I hope and pray that nothing happens on New Year’s Eve. Seems as though the elite are ramping up their plans just like the Bible prophecies. If at any time they are going to pull off something massive, this would be the event. Millions stuck downtown with nowhere to go and billions watching on TV.”

“Out of a hundred and thousand evacuees”

“I note 7 likes and 3 shares but it’s still showing 268 views, so YouTube is rigging statistics”

“Do you have any idea how many patients Dr. Janov has treated and continued to treat from the mid 60s to now, 2018, 58 years later?”

“14 years ago, whatever year that was”

“They did a complete three sixty”

“NOT MANY PEOPLE know that Queen’s Bench Division is open 24 hours, 365 days a week”

“In October last year I claimed 6 million pounds from them and under Biblical law it gets 7-fold, so it’s now £72 million that they owe my family”

“A mother of ten has had her six children taken”

“Great Fire of London started in a bakery in 1666. This preceded The Great Plague of 1665”

“Even a stopped clock is right twice a year”

“I know that she’s been extradited. She’s gone to France but there are five prisons there”

“He walked into a pub that had a hundred bouncers…”

“Out of 7 trillion people on this planet…”

“I’ve been researching and investigating the Hampstead case for 4 years, since February 2015” (Angie, Feb 2020)

Please let us know if you spot any worthy additions  🙂 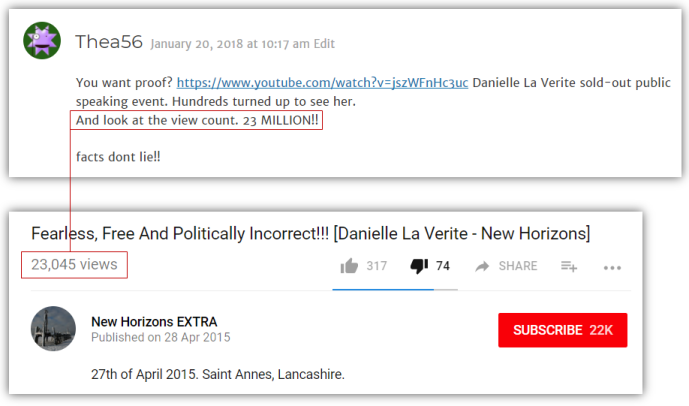 3 thoughts on “Number Crunching with the Fruitloops”