We are all too familiar with the daunting number of videos promoting the Hampstead SRA hoax that can still be found on YouTube (and don’t even get us started on Vid.me or Vimeo). Most of us have had at least some success with having individual videos taken down, but getting an entire channel removed is a whole other kettle of fish. It can take weeks or months of concerted effort, often for minimal return.

Recently, though, we became aware that a group of Hoaxtead opponents had managed to get an entire YouTube channel shut down…and the victory was made sweeter by the channel’s popularity amongst the hard-of-thinking. We refer, of course, to Aaron Dover, the psychopathic lunatic who has sequestered himself in Thailand for fear of being arrested should he attempt to return to the UK, as a result of various attacks and threats against members of his own family. Lovely feller really, but don’t ever ask him about Greenland. He thinks it doesn’t exist, and will start frothing at the mouth and waving his…gun around. We swear we are not making this up.

Here’s how we targetted Aaron’s channel: we reported the entire channel, using the “Report User” flag on the channel’s “About” page.

In the “What is the issue?” section of the dropdown box, we chose “Child endangerment”.

YouTube allows you to select up to five videos that illustrate your concerns; we chose videos of RD’s children responding to Abe’s questioning.

And in the “Additional Notes” section at the bottom of the page, we pointed out several issues:

YouTube does not have a stellar track record when it comes to removing Hoaxtead videos, but mention “child pornography” and they will snap to. Given the huge volume of videos on YouTube, it can sometimes take a while for their reviewers to get to our complaints, but we’ve found this formula seems to give better results than the old “it’s illegal, it’s part of a hoax, people are being hurt by this” argument.

Kane Slater, your time has come

The next YouTube channel we’d like to target belongs to the Canadian paedophile and cannibalism enthusiast Kane Slater, (oh, should we have said “alleged paedophile”? whoops!) whose channel consists almost solely of videos of RD’s children.

Here’s a walk-through of the reporting process: 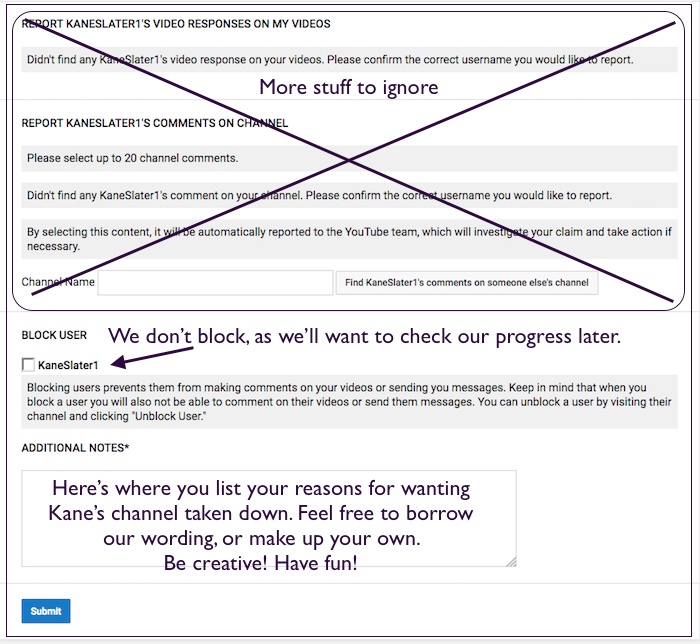 Once you’ve reported Kane’s “garden of paedophilic delights” to YouTube, come on back and let us know in the comments section. The more people who report this material to YouTube, the more likely they will be to remove the channel, so let’s get cracking. This truly is a case of “many hands make light work”.