If you’ve been online in the past couple of weeks, chances are you’ve seen the hashtag #pizzagate popping up on sites like Facebook, Reddit, Twitter, and YouTube. We’ve talked about it here, but in the past week the #pizzagate phenomenon has grown exponentially, spreading its slimy fake-news tentacles as far as respected U.S. newspapers like the Washington Post and the New York Times.

Yesterday both papers published critical, thoughtful pieces on the #pizzagate conspiracy theory and how it has hurt not only the owner, but workers and patrons of a popular pizza parlour in Northwest Washington.

According to the Times, #pizzagate started with the WikiLeaks email hacks that were made public just days before the U.S. presidential election: 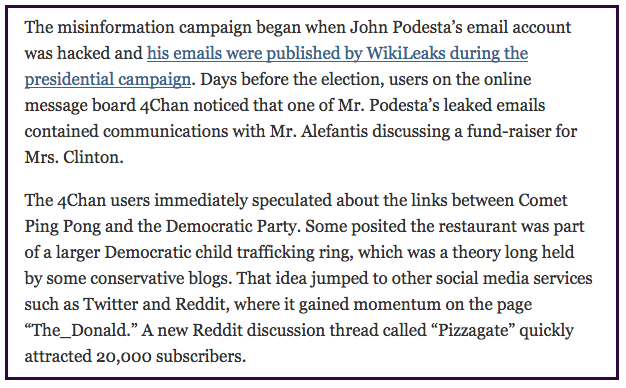 Residents of Hampstead will feel a shudder of recognition at what followed:

A few conspiracy nuts grab some spurious information from a dubious source, draw some imaginary lines to create a story that confirms their own daffy preconceived notions of how the “elites” operate, and next thing you know, you’ve got death threats and harassment, and an innocent group of people trying to shield themselves and their families from online and in-person attacks.

The owner of the pizza joint in question, James Alefantis, told the Times, “From this insane, fabricated conspiracy theory, we’ve come under constant assault….I’ve done nothing for days but try to clean this up and protect my staff and friends from being terrorized”.

Mr Alefantis, the people of Hampstead understand and sympathise. It’s not easy trying to remain calm in the face of a tsunami of public hatred, especially when you have no idea where it came from, have done nothing to deserve it, and don’t know how to stop it.

Of course, as the #pizzagate farce gathers steam, you have to know that those with an interest in promoting the Hampstead SRA hoax will try to turn it into a victory. People like Deborah Mahmoudieh, Angela Power-Disney, and Sabine McNeill have all latched onto the story as though it was the last lifeboat on the Titanic.

In effect, they’re using a proven hoax as “conclusive evidence”, trying to proclaim that they were right all along, there really is a world-wide child-trafficking cult conspiracy: 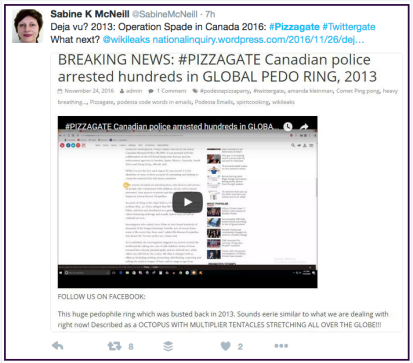 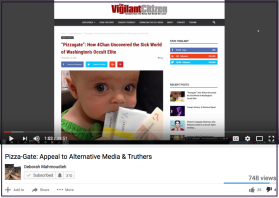 Hoaxtead mobsters are trying to leverage this story into a last-ditch push to get Hoaxtead onto the world stage…and here’s why it won’t work.

The ravening crowds who are currently baying and slavering as they try to find the “silver bullet” that will prove that #pizzagate is real, dammit! are not interested in some rinky-dink two-year-old hoax in a suburb of London. They are after much bigger prey: most of them seem to be Trump supporters, who just can’t resist this one last chance to kick Hillary Clinton in the slats while she’s down.

They’ve already won the election, but that’s not the point. They want to crush their opponent into the dirt…and that has absolutely nothing to do with Hoaxtead. Hoaxtead is a complete non-issue for 99.9% of the #pizzagate nutters.

Even more important is that for the first time in the history of the internet, the giant social media platforms are being forced to sit up and take notice. Reddit, known to some as “4Chan Lite”, has actually banned the original #pizzagate thread, ostensibly because it violated their policy of naming names. In reality, they grasped the fact that continuing to host this kind of harassing and defamatory material could make them legally liable…and that could add up to a world of pain for Reddit.

As our commenter Sam has pointed out here, a recent case in Australia proved that internet media giants like Google can be sued for refusing to remove defamatory material. Lawyers for several other social media sites attended the trial, which will likely have repercussions across the internet.

In social media terms, #pizzagate is a great honking lawsuit just waiting to happen. Even Facebook’s Mark Zuckerberg has had to promise to take steps to stanch the flow of fake news; and where Facebook goes, Twitter usually follows.

So what will become of #pizzagate? Eventually it will die down, consigned to that corner of the internet reserved for those who think the Earth is flat and alien reptiles live on a compound on the dark side of the Moon. A few hardcore nutters will continue to try and push it, but the vast majority of current supporters will drop off, most likely within a month or two. The news cycle giveth, and the news cycle taketh away.

And once again, the Hoaxtead mob will be left weeping and wailing and gnashing their teeth, as their pet conspiracy once again fails to achieve lift-off. 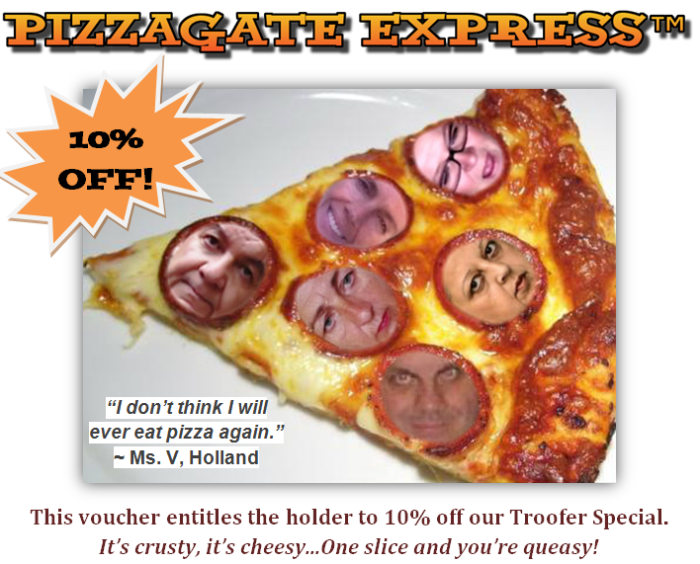