In the wake of Sunday’s armed invasion of the Washington, D.C. pizza restaurant at the heart of the bizarre “pizzagate” conspiracy, it’s fascinating to watch the hoaxer movement run about squawking and squealing. They are now trying to invent a brand new conspiracy theory to explain why one of their own failed to find a shred of evidence of Conspiracy #1, their imaginary “child trafficking ring” in the “secret rooms and tunnels” under the restaurant.

Just as we predicted, the hoaxers are screaming “false flag!” in an attempt to explain why Edgar Maddison Welch, a 28-year-old father of two from North Carolina, allegedly blew the lock off a door with his assault-style rifle, searched the restaurant for 45 minutes, and found…nothing.

No secret tunnels, no children, no nothing.

Mr Welch is currently in police custody, so he is probably unaware that the hoaxers whose paranoid fantasies encouraged him in the first place have now roundly denounced him. They are claiming he was a “crisis actor” hired to create a “false flag” event, to persuade the gullible public (yes, that’s we the sheeple) that there’s nothing to substantiate the “pizzagate” hysteria.

This is standard hoaxer strategy: when confronted with evidence that clearly contradicts their cherished fantasies, they concoct even more elaborate fantasies to explain the anomaly. Evidence be damned: if the hoaxer community wants it to be true, they will pull out all the stops to ensure it’s believable…at least within their own echo chamber of paranoid delusions.

According to the hoax movement, facts are for losers.

And what of the hoax pushers?

Interestingly, though, some of the prime movers who’d been pushing “pizzagate” for all it was worth have now begun to step away from it.

Alex Jones, for example: prior to the armed invasion of the restaurant, he was totes gung ho: 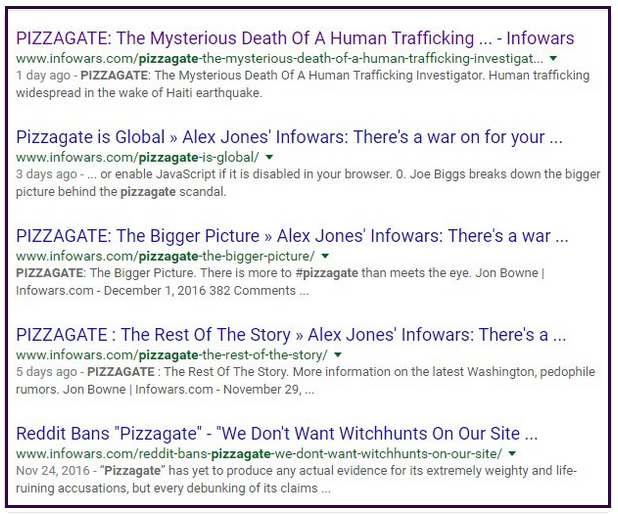 …and then Mr Welch did his alleged thing, catapulting what had once been an obscure conspiracy mooted about amongst a few hundred loony extremists into the harsh glare of public scrutiny.

Fake news, already a hot topic following the U.S. election, was suddenly not just a way to disseminate falsehoods about one’s political enemies. Now, it was about nutters getting armed to the teeth and invading family restaurants. Since Sunday’s events, it’s become clear: fake news can come with real bullets.

And suddenly, Alex Jones isn’t quite so gung ho about “pizzagate” any longer:

“C’mon guys, let’s just forget about that pizza thing…erm…that is, I think the Ebil Mainstream Media is blowing it all out of proportion here, yeah, that’s the ticket! So I’m thinking maybe we should go back to slandering Hillary Clinton and John Podesta, whaddaya say?”

Yes, he really did have the brass neck to claim that the “MSM”—hoaxer-speak for “mainstream media”—were the ones “distract(ing) with #Pizzagate Obsession”.

One possible reason for this sudden backpedalling, of course, is that he doesn’t want to be done for inciting violence. Mr Welch was a huge fan (or as they say over there, a “yuge fan”) of Mr Jones and his InfoWars show, and when his case comes to trial, we expect that wee fact will make its way into the public sphere. Things could get, well, embarrassing. Not to mention expensive, should the owner of the restaurant decide to become litigious.

It’s also been suggested here (thanks, Ghost of Sam!) that Jones’ sudden about-face may have much to do with the fact that social media platforms and search engines are looking at a future in which they will be forced to down-rank fake news in their algorithms, if not ban it altogether.

And since Mr Jones’ entire career is built on the creation and dissemination of fake news, he is, as they say, screwed.

There’s an old saying that when your enemies are trying to run you out of town on a rail, the best thing to do is grab a baton and lead the parade. Welcome to your new cheerleading career, Mr Jones!

Meanwhile, the rank and file hoaxers, who’ve been gobbling “pizzagate” up as though there’s no tomorrow, will continue to twist themselves into pretzels as they try to convince themselves, and one another, that Mr Welch was a crisis actor, the tunnels are real, and the Satanic cult child eaters are on the verge of taking over the world.

In other words, business as usual. 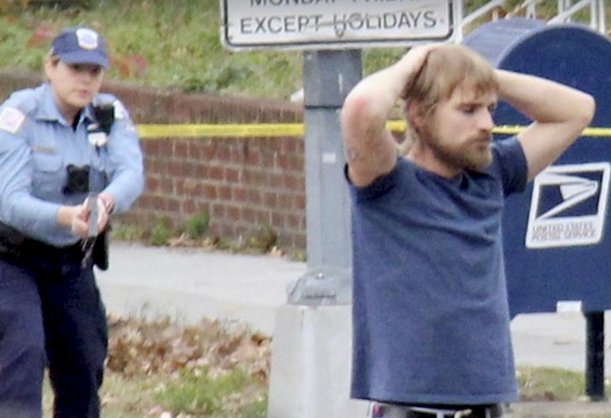 85 thoughts on “Hoaxer movement in a tailspin over Pizzagate gunman”