Coverup: an attempt, whether successful or not, to conceal evidence of wrongdoing, error, incompetence or other embarrassing information. In a passive cover-up, information is simply not provided; in an active cover-up, deception is used.

If you’ve read even a little of what devotees of Abraham Christie and Ella Draper have to say about the Hampstead SRA hoax, you’ll have come across the term “Hampstead coverup”.

To these people the lurid and bizarre story which was originally built and promoted by Sabine McNeill, Ella Draper, Abraham Christie, and Belinda McKenzie is no hoax at all.

But the real “Hampstead coverup” is very real, and should be very, very disturbing to anyone who truly cares about children, families…and the truth.

The inception of the Hampstead hoax is shrouded in mystery. No one knows exactly where the first discussions took place, but we can pinpoint those who were involved, based on three years of research.

We know that Sabine McNeill was a prime driver of the hoax, along with Ella Draper. Sabine and Ella were acquainted before the summer of 2014, and we know that by June 2014 plans were already under way to create and promote a “Satanic abuse scandal” which would not only ensure that Ella never had to deal with her ex-partner RD again, but that Sabine would be seen as a national heroine—a longtime ambition of hers.

They brought in Belinda McKenzie, Sabine’s friend, funder, and business partner, who had spent more than a decade hobnobbing with UK-based conspiracy theorists, and whose connections would prove so valuable to the nascent hoax.

And of course, the hoax wouldn’t have worked without Abraham Christie, whose skills included fraud, forgery, assault, and child battering. Abraham had been trying to remake himself as a health guru, and fancied himself something of an expert in mysticism and the arcane—though like most small-time criminals, his ego far outstripped his actual abilities.

These four conspired to create a hoax which would catch the fancy of the conspiracy community, while also cynically playing upon the sympathies of anyone who cared about children. 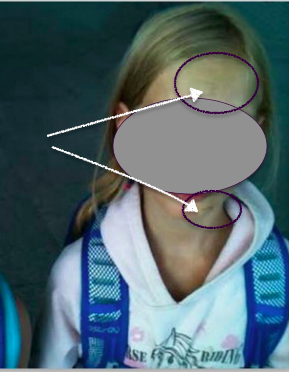 They kept the real child abuse carefully hidden, though they couldn’t quite disguise the bruises and burn marks on the little girl’s face, nor the ruptured eardrum and dried blood in the little boy’s ear, both of which pointed to very recent abuse.

The co-conspirators worked hard to cover up any trace of collusion.

This was the plan: keep Sabine, Belinda, and those they recruited to help publicise the hoax—Brian Gerrish, Bill Maloney, Araya Soma, Charlotte Ward—under wraps until the children had been trained to recite their lines perfectly.

Following a month in which Abe and Ella would physically and mentally torture the children until they could perform more or less convincingly on video, they returned briefly to the UK, to show off their handiwork to Gerrish in Plymouth, and Araya Soma in Glastonbury.

Once this was accomplished, the plan was to fly back to Morocco for good; they’d be able to share the videos online without fearing repercussions from the UK police.

The plan went wrong when Abe’s brother-in-law, a Special Constable in the Metropolitan Police, reported the children’s strange story. This led to the police investigation, which threw a major spanner into the carefully laid coverup…but by the time the hoax went public, the conspirators were able to turn that to their own advantage, playing upon their audience’s fear and mistrust of the police by claiming that “no real investigation” had been done.

In reality, the investigation had been all too thorough, and had revealed the conspiracy for what it was.

However, by releasing only selected pieces of information, and quietly hiding anything which might reveal the truth, the co-conspirators carefully manipulated their followers and supporters. Shown only the videos which seemed to support the story that a secret elite group of Satanists were abusing children and murdering babies in a well-heeled area of London, most of those in Sabine and Belinda’s existing fan-base accepted what they were told.

What was kept hidden?

While videos such as the children’s “confessions” to Abe and Ella, and eventually their police interviews and the Jean-Clement audio recording, were released to the public, much remained hidden from view.

For starters, while Ella is in possession of her interview with police in September 2014, she and Abraham have kept it carefully under wraps, out of public view.

We know from notations of the CRIS report (which they did release, with parts redacted and certain pages missing) that the police were puzzled by Ella’s seemingly relaxed attitude toward her children’s alleged abuse. The police mention in the report that Ella was “laughing and joking”, but someone has pencilled in, “Did not happen!”, in an attempt to cast doubt on this observation.

There’s only one way to know for sure whether it did or did not happen: those who’ve been covering up the Hampstead hoax need to release Ella’s police interview, complete and unedited. People who believe in the hoax should demand this, as a bare minimum.

Believers in the hoax also have a right to know the details of Abraham’s history as a child abuser. We have had communications with his step-daughter, who told us that Abe used to line her and her siblings up and make them read aloud to him; if they made any mistakes, he would beat them.

We also know that Abe tried to get his step-children to falsely claim that their own father had abused them; and we know that Abe was cautioned for physically attacking his teen-aged son. We’ve heard from the nephew of a woman who was forced to fight Abe off, in an attempted rape.

Those who’ve participated in the Hampstead coverup try to downplay all of this, but we believe that believers in the hoax should be made aware of the full truth.

They also have a right to know the extent and nature of Abe’s criminal activities prior to the Hampstead hoax. We know from the March 2015 High Court judgment that Abe had multiple criminal arrests and many jail sentences, but those who believe in the hoax should be aware of these details. What is he hiding?

Ella’s history with the family courts

Those who have been duped by the Hampstead coverup also have a right to know about Ella’s many violations of court orders. They have a right to know why her children had a CIN (Children in Need) plan with the London Borough of Camden in 2008, six years before she accused RD of any wrongdoing.

Don’t let the Hampstead conspiracy fool you. If you are inclined to believe what you’ve been told by the likes of Gerrish, Sabine, Belinda, Abe, or Ella, you have a right to the full story.

You have a right to know why Ella told Nathan Stolpman that she’d invented the part of the story about her ex-husband and eldest son…but still had her children and Abraham claim that that their half-brother and his father were “in the cult”.

You have a right to know how Sabine could claim to believe in the Satanic abuse story, and yet was perfectly willing to exchange her silence for the return of the two children—which would have left dozens of other children, and presumably thousands of innocent infants, at the mercy of the “cult”.

When you look at the Hampstead hoax more closely, it becomes clear: there really was a coverup, but it wasn’t perpetrated by the police or courts.

117 thoughts on “The real Hampstead Coverup…revealed!”