Over the past several days we’ve been reviewing some of the aspects of the IPCC report on the police investigation that took place in September 2014. Today we’d like to talk about a piece that has been the subject of much discussion amongst Hoaxtead pushers: the children’s retractions of their original allegations.

In the original complaint to the IPCC, the retractions were identified as seriously problematic:

All of these claims were rejected by the IPCC, for various reasons. Let’s look at them one at a time.

Retraction statements were inadequate due to the level of detail in the initial complaints.

IPCC Professional Standards Champion DCI Treena Fleming points out in the report that while the children’s initial allegations were indeed detailed, they were not accurate.

On the drive-round by police, the children were unable to point out their father’s house, despite having earlier alleged that some of their abuse had taken place there.

“The details in relation to the Church were indeed very detailed,” writes DCI Fleming, “but it was by virtue of this detail that officers could prove beyond doubt that it was factually incorrect”.

While DCI Fleming agrees that the initial allegations were indeed horrific and shocking, she notes that the children themselves stated that Abe had provided them with some of the details. They also said they’d been involved in concocting some themselves:

(Contrary to what some Hoaxtead pushers claim, the children never stated that they got the whole idea from that film, but rather just a few details.)

Retraction statements were made after the children were threatened.

In their complaint to the IPCC, Ella & Abe alleged that the children had retracted their allegations only after having been ‘threatened’ by some unspecified combination of social workers, police, and Cafcass.

As DCI Fleming points out, no evidence, specific allegations, or specific individuals were named in this regard.

Those of us who were watching this situation unfold last year will recall that when the police interview videos came out, the Hoaxtead mob were beside themselves with delight…until they watched the third set of interviews, in which the children retracted their allegations.

The mob, spurred on by Abe & Ella, immediately began searching for possible rationales for this sudden turnaround: the children had been subjected to post-hypnotic suggestion; they’d been terrorised into retracting; they’d been re-captured by the ‘cult’ and reprogrammed.

Anything to avoid the obvious: the children were relieved to be out of Abe’s sphere of influence, and now felt comfortable disclosing that he’d tortured them into telling lies. As many people have noted, both children seem to relax for the first time, knowing they’re free to tell the truth.

Retraction statements were coerced from the victims and inconsistent. Concerns raised over the language used by the interviewing officer.

Here’s what DCI Fleming had to say: 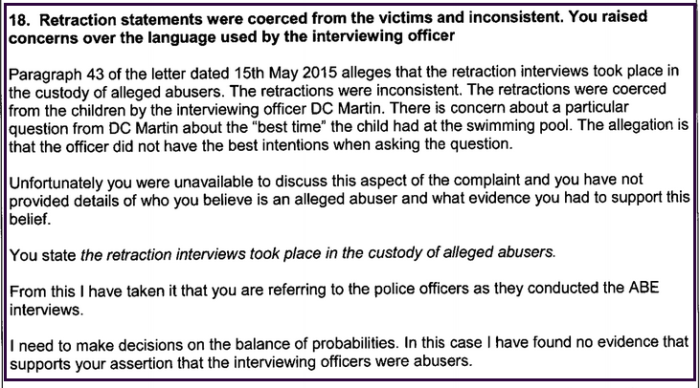 She makes the point several times throughout the report that “Unfortunately you were unavailable to discuss this aspect of the complaint”—this is a reference to the fact that Ella is currently on the run in Spain, fleeing charges of child abuse.

DCI Fleming also challenges Abe & Ella to provide a single shred of evidence that DC Martin had anything but good intentions while interviewing the children. 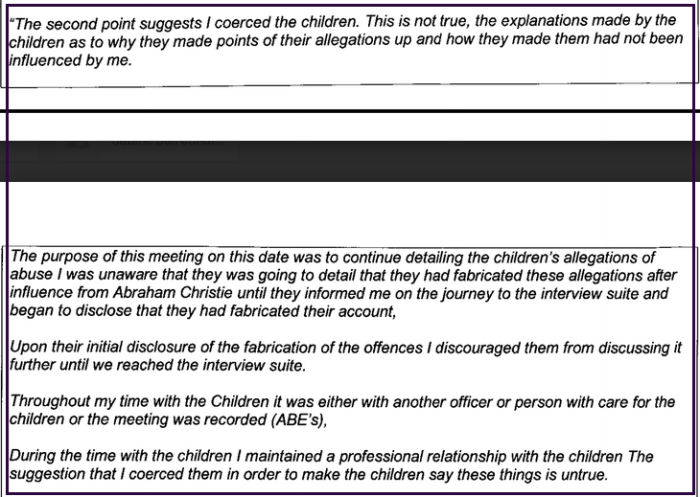 Of course we know that this will not convince the die-hard Hoaxtead mob, who desperately need to believe that the children’s retractions, and not their initial statements, were made under duress.

But to most reasonable people, DC Martin’s statement rings true.

Having stated that she fully accepts DC Martin’s version of events, DCI Fleming asserts quite pointedly that “serious consideration has been given to the possibility of re-interviewing the children to collate more evidence about why the allegations were initially made”.

In other words, it is clear to her, as it was to the investigating team, that the children’s initial allegations were coerced, and that it was likely that they could have given evidence that would have led to charges against Abe & Ella. Luckily for the two fugitives, however, the investigating team decided that further questioning would have been too traumatic for the children, and so that idea was dropped.

The officer led child Q to retract the allegations regarding the murder of children.

Those who watched videos of the third police interview will likely recall DC Martin saying to the little boy, “Are you sure? It’s okay if it hasn’t happened as long as we talk about it now”.

We’ve all heard the screeching from the Hoaxtead pushers: that mean bad terrible officer was coercing the child! He was pushing him to say what he wanted him to say! Naughty, naughty DC Martin!!

But any good parent who has caught a child lying knows that the child is far more likely to admit to the lie if he or she is given an opportunity to save face and avoid punishment. Telling a child that they won’t get in trouble for a lie is one of the best ways to ensure that you’ll hear the truth.

In addition, DCI Fleming points out the following:

As DC Martin mentioned in the beginning of the interview, the little boy had begun to retract his initial allegations in the car on the way to the interview. Quite rightly, DC Martin asked him to hold that discussion until they’d reached the interview suite, where all conversation would be properly recorded.

By this time, the children had begun disclosing the truth to the various helping professionals involved in their case: the psychiatrist, social worker, and so forth. It was DC Martin’s job to probe this information further, and he did so. Ultimately, his role as interviewing officer was to help the children tell the truth.

Ultimately, the IPCC report comes to the same conclusion that most rational people have already reached: the children’s retractions were honest, sincere, and voluntary. And they were returned to a life of safety and sanity by a team of police officers who did their jobs well.