Yesterday we discussed the newly revealed appeal letter from the IPCC, which Ella’s solicitor seems to have received in late November 2016. To no one’s great surprise, Kristie Sue Costa leapt onto the appeal letter and began waving it about, screaming, “See? See?! We were right all along!” (This based on one sentence from the appeal letter, in which the case manager states that she is not satisfied with the findings of the previous investigation.) On the contrary, the appeal acceptance letter upholds certain parts of Ella’s appeal and rejects a great many others. It certainly doesn’t “prove” the validity of the hoax, but it’s hazardous to get between a troofer and their cherry-picked “evidence”. Mind the spittle.

Today we’re going to address one of the biggest bones of contention in the original police investigation in September 2014, the children’s retractions of their allegations. In their appeal of last spring’s IPCC investigation report, Ella and Abe alleged that 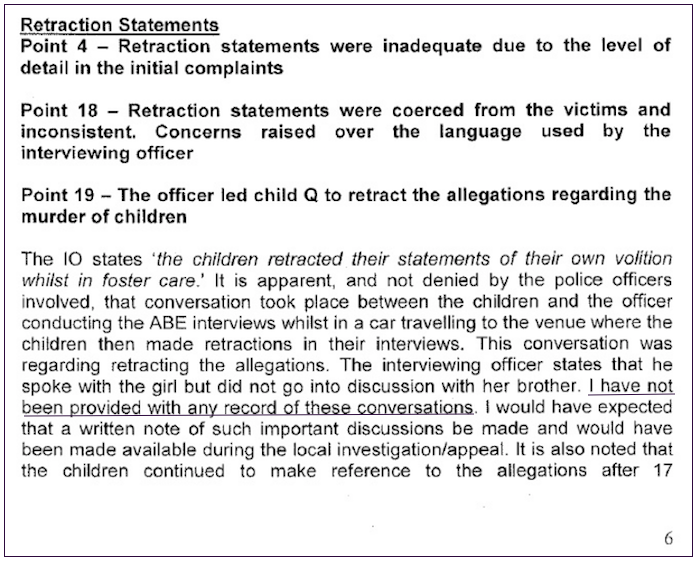 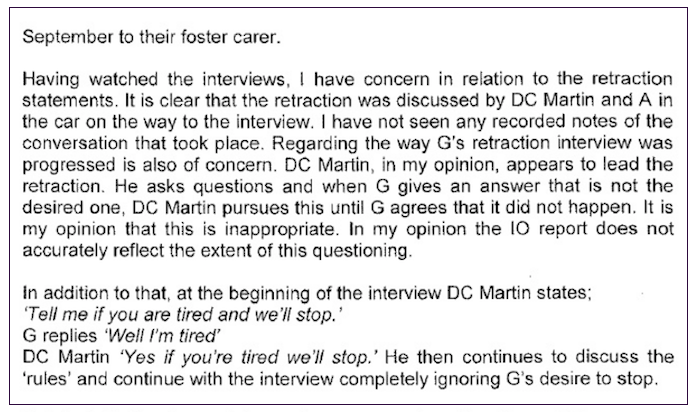 As with the points we covered yesterday, the primary concern of Ms Alderson, the IPCC case manager, is that inadequate records were made of the conversation between the little girl and the police officers in the car on the way to the final set of interviews. This seems a reasonable expectation, as such notes could have confirmed that precise way in which the conversation began, and could have helped to eradicate lingering doubts about the veracity of the retraction statements.

The case manager also states that “the children continued to make reference to the allegations after 17 September to their foster carer”. Again: quite reasonable, given that they had spent an entire month in Morocco being severely traumatised—”tortured” was the word Mrs Justice Pauffley used, and we think it was an apt description. To expect the children to simply forget what happened within a month or two of the events would be completely unrealistic in our view.

Ms Alderson reserves her most stringent criticism for the way in which the little boy’s retraction was handled. She states that DC Martin “appears to lead the retraction. He asks questions and when G gives an answer that is not the desired one, DC Martin pursues this until G agrees that it did not happen”.

On the face of it, this is an accurate observation. However, anyone who has ever had to confront a child about a lie they’ve told will understand what DC Martin was doing: he was offering the boy a chance to retract his allegations without losing face. When children say things they know not to be true, they can have great difficulty letting go of the lie: they will earnestly insist that they were absolutely not the culprit who ate the chocolate cake in the refrigerator, even though they are covered from head to toe in cake crumbs and icing. Admitting that they have lied can be very difficult for children of a certain age, and sometimes an experienced parent will understand that the child needs an “out”—an opportunity to tell the truth, knowing that they won’t face punishment for having lied.

We believe that this is what DC Martin was trying to do: he was offering the boy a chance to correct the record, consequence-free.

Unfortunately, while this makes sense as a valid way of helping a child tell the truth, in a police interview video which has been illegally plastered across the internet, it looks bad.

…at the beginning of the interview DC Martin states: ‘Tell me if you are tired and we’ll stop. G replies ‘Well I’m tired’. DC Martin: ‘yes if you’re tired we’ll stop.’ He then continues to discuss the ‘rules’ and continue with the interview completely ignoring G’s desire to stop.

It’s interesting that when we initially listened to the video of this interaction, we heard the little boy say, “or I’m tired”, as though he was echoing what DC Martin had told him. Only upon listening closely to the video a second and third time were we able to hear it as “well, I’m tired”. It’s possible that DC Martin heard it the way we did; once again, we will not know until and unless a further report is completed and made public.

These are the IPCC case manager’s primary criticisms regarding points 4, 18, and 19 in the retraction interviews. Essentially, she is stating that she would like further information to help her understand what was said in the car on the way to the interviews, and she wants to know why the little boy’s retraction was handled as it was. As we discussed in yesterday’s post: “show your work”.

Were the children threatened?

As for the other points (5, 6, and 7), Ms Alderson states that there’s no evidence the children were threatened in order to extract retractions from them:

This, it seems to us, is one of the critical points upon which Abe and Ella’s arguments hang: if the children could be shown to have been threatened into making their statements, it would go toward showing that the police, social services, and others in positions of authority were “part of the cult”.

Nor does the IPCC accept that the investigation was curtailed because of “concerns that the case would cause a stir in society”:

In fact, Abe and Ella set out to “cause a stir in society”, which they hoped to milk for their own gain. Interesting, then, that they accuse the police of doing the very thing they intended.

Finally, the complaint that the case was not handled by the proper specialist unit is dismissed as just plain silly:

If not the “Child Abuse Investigation Team” (CAIT), then where?

Abe and Ella invested a great deal of time and effort into their various IPCC appeals. Given their gloating at the first accepted appeal, it was clear that they felt they had a chance of being vindicated by an IPCC investigation. However, the report last spring fell far short of their expectations, and this new appeal acceptance does very little to repair that damage. Yes, the IPCC case manager is asking for further information on a number of points; but nowhere is it categorically stated that the police investigation was fatally flawed. Nor is there any allegation that the conclusions the police reached were incorrect—and surely, this must have been what Ella and Abe were hoping for.

This is part of a series on the IPCC appeal letter which person or persons unknown posted on Scribd on Sunday, 15 January 2017.
Coming up in tomorrow’s post: the medical evidence, and the alleged tattoos and “distinguishing marks”. 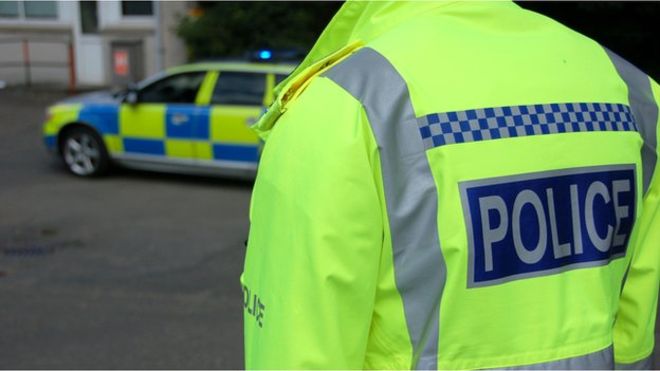