Earlier this week we discussed how the police CRIS report on the investigation into the Hampstead SRA allegations portrayed a less flattering version of Ella Gareeva Draper than her acolytes would have us believe. As a result of that post, we were contacted by a commenter on this blog who wished to remain anonymous for the purposes of this post.

The commenter told us a very curious story, which we have no way of confirming. However, following a lengthy discussion via Skype we believe this person to be sincere, and so we’re presenting their story here (some parts have been paraphrased for clarity):

Your readers might recall that a branch of the McDonald’s chain, which closed its doors on 17 November 2013, was nevertheless named in the hoax as a place where murdered babies were cooked before they were consumed by members of the imaginary cult.

In early November 2013, I was asked to be a witness along with one other person, to a meeting which took place in that McDonald’s. The meeting was between Ella Draper and her ex-partner Ricky Dearman. Mr Dearman had asked my friend to come along to the McDonald’s, and my friend asked me to join him. We were to sit near their table and just watch. I wasn’t sure exactly what we were looking for, but my friend said it was important so I went along.

Ella was there when we arrived, and Mr Dearman came along shortly after. She had some papers with her, and she pushed them at him. I could see him shaking his head no, and she kept telling him he had to sign. He had this look on his face like no way was he going to sign those papers, and he was saying something like “I’ll never see them again? You think I’ll agree to that?”

Then he reached into his jacket and pulled out his own bundle of papers. Her eyes got very large, and you could see she hadn’t expected this at all. She was like, “What’s this?”

“I’m taking you to court. I’m serving you with notice”.

Her jaw literally dropped, and she turned bright red, you could see she was just furious. Like the fury of a thousand suns, but she literally looked like she couldn’t speak. She was just staring at him with this look on her face like she wanted him dead. I’ve never seen anyone look like that before, and I hope I never do again.

Mr Dearman got up and walked away after he handed her the papers, and Ella just sat there. I was trying not to stare, as I didn’t want to be too obvious about watching, but it was clear she was really rattled.

My friend and I left, and he told me afterward that the reason we’d gone is that Ella had made various false allegations about Mr Dearman in their court battles over the children, and we’d been there to make sure that if she tried anything, we could tell the court exactly what we’d seen. My friend thought it would be best to have someone who didn’t know either of them and couldn’t be accused of bias I guess.

As it turned out, he wasn’t supposed to have served her the papers himself, but was supposed to have had them served by a third party, but I guess he didn’t know that at the time. So later I saw news of the hoax in the Ham & High, and I started taking an interest in the case and sometimes even commenting on the blog.

I hadn’t wanted to say anything about my small role, but when I read about Ella’s behaviour as a mum versus what she claimed about herself, something snapped and I thought the time has come to talk about what I witnessed. I hope it helps.

We have no reason to believe that this story is incorrect, and if true, it certainly does help explain why Ella and Abe later attacked RD with such ferocity.

We were interested to note that this story meshes with some of the information RD gave police during his interview under caution. 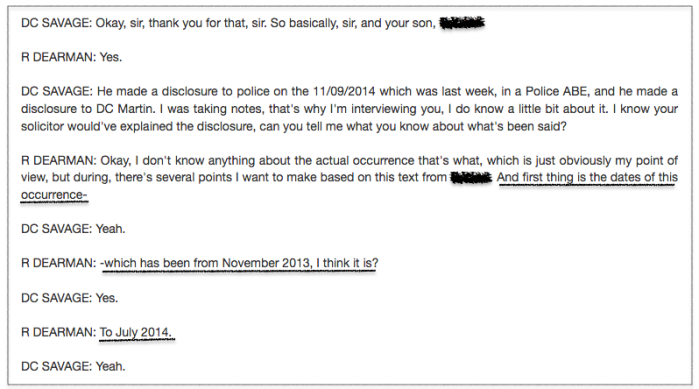 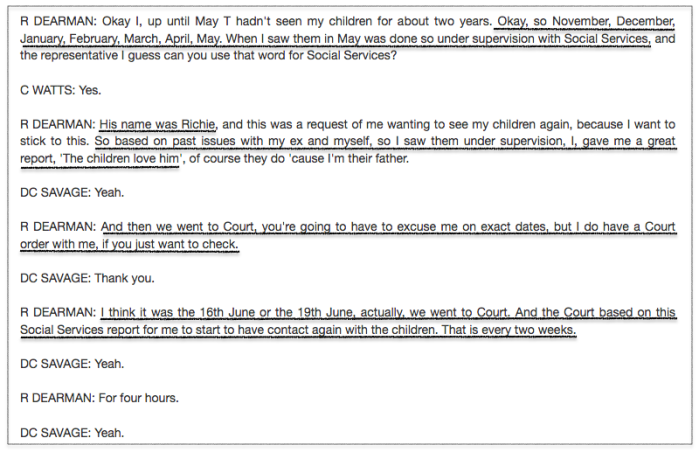 Here we see RD stating that although the children have been made to claim that he and the “cult” were abusing them between November 2013 and July 2014, in fact he had not seen them for nearly two years.

But instead of leaving it at that, he counts off “November, December…” etc. This made us wonder: was he using November 2013 as a kind of mental touch-point, since it was the last time he’d seen Ella before his contact with the children in May.

Another interesting fact: RD saw his children twice in spring/summer 2014, both times under supervision of a social worker named Richie. Richie gave RD an excellent report, stating that “the children love him”. In light of our witness’ story, this report would have been anathema to Ella, who would have seen it as one more step on the way to losing custody of her children.

Flash forward a couple of months, and we find that Richie, like anyone else who’d angered Ella and Abe, was now on the list of alleged abusers. His crime, it seemed, was saying that RD and his children were doing well with limited contact, and that this should be extended, first to eight hours and then to an overnight stay.

In this segment of the police interview, it’s obvious that RD is working toward more contact with his children; this also bears out the story of our correspondent.

And as a side point, it could explain why Ella and Abe included the McDonald’s restaurant—which had been closed nearly a year—in their description of the alleged cult.