Many thanks to the kind anonymous reader who sent us this gem: an unlisted video of Belinda McKenzie’s closing address at the recent party conference of the  Democrats and Veterans Party, held 14–15 September in Barnsley.

We recently noted Belinda’s presence at the conference, as she introduced ex-police officer Jon Wedger to the podium. At that time we wondered what role, if any, Belinda was playing in the newly spawned party; in this video she (more or less) explains all.

The video is a veritable cavalcade of jaw-droppery.

‘A political party with real teeth’

What I particularly liked [about the D&V Party] were two things: direct democracy, and the other one is the fighting element of this party. Because I regard us as at war. I’m at war, anyway. And I’m fighting for the children, and our future. And so we need a political party with real teeth, to save our nation…

One has the sense that she is not speaking in metaphors here.

‘It doesn’t matter what I say…’

Noting that she was “usually on the streets with a megaphone”, and that her rants were usually blown away into the wind, so “everything I say blows away in the wind and never gets heard by anybody, so it doesn’t matter what I say”, she said that she’d initially dithered over whether to accept this opportunity for a more public platform, where her words would presumably be not only noticed, but recorded for posterity.

We’d take issue with Belinda’s belief that her words don’t matter. In fact, we can think of a particular community and many individuals whose lives have been altered significantly by Belinda’s words, whether spoken by herself or by her minions.

‘I started my life as a small child…’

I am absolutely against child abuse, that’s the number one thing in my life.

I started my life as a small child [Unlike all the other people in the world?—Editor] detesting cruelty, and detesting injustice in about equal proportion, because I couldn’t stand it….It just didn’t feel right….

I was so bothered by the cruelty that I decided to read Japanese at Oxford University.

When we regained consciousness, we replayed this bit and discovered that Belinda had been so perplexed by the “cruelty of the Japanese” during the Second World War that she felt she had to delve into that language and culture. She does not reveal what, if anything, she discovered.

We’ll just leave that hanging, and let you make of it what you will.

The loneliness of the long-winded ‘activist’

Belinda continued to riff on the topic of child abuse:

A baby is the most disabled citizen in our society, with apologies to the disabled community, because the disability is right throughout its body. It’s tiny, it’s got no speech, it’s got no—apart from crying—way of communicating, it can’t walk, it can’t fight, it can’t do anything!

It’s completely and utterly helpless. And yet babies are abused. And that’s an abomination. And trying to get inside the mind of a baby as it’s suffering the kind of experiences that too many of them in our world suffer has been the cause of many sleepless nights and much agony.

In a sudden about-face, she pointed out that her online reputation would appear to preclude her from pursuing her life-long passion for child protection:

I am a charity scammer. I am an MI5—secret MI5 closet agent, undermining the alternative community. I am a paedophile protector because I stood up once or twice for people who are accused of being paedophiles, when they absolutely assured me they weren’t.

In point of fact, Belinda’s paedophile friends weren’t merely accused, they were convicted. But if they “absolutely assured” her that they weren’t, well, that’s a different matter. Obviously.

Belinda admits that she caught flak not only from the public, but from her family for inviting her paedophile friends to her home. To which she responded that she had not been satisfied with the level of scrutiny at what they had done.

Makes perfect sense to us: why trust a police investigations and court judgment, when the convicted person is willing to “absolutely assure” her of their innocence?

Despite the fact that Brian Pead, the “Lambeth Whistle-blower” was caught red-handed, Belinda remains convinced that he is a “very noble and decent man”.

In this version of Belinda’s career as a campaigner, she claims that after she retired, she knew she wanted to do something to counter cruelty against children.

So there was a charity up the road from me, and it was an Iranian children’s charity, and it was looking after children who were victims of the murderous Iranian regime. …

Apart from the campaign to save the Iranian charity, which then led me into a campaign to try to get the Charity Commission to use its powers more reasonably and more charitably, and more proportionately towards charities, and I headed up a little group called the Association for Charities.

Not only does she fail to actually name it, but Belinda manages to reduce her involvement in the highly questionable Iran Aid “charity” to a single phrase: “Apart from the campaign to save the Iranian charity…”

Similarly, she managed to get through a description of the Hollie Greig hoax without naming it, in order to avoid running afoul of any court injunctions.

However, those familiar with the case might choke a bit at her description:

A very brave gentleman called Robert Green was suddenly arrested on the street for being about to—he hadn’t actually got to the leafletting part—but being about to start leafletting in the centre of Aberdeen, on 12 February, 2010, on the subject of paedophile rings in the locality.

Belinda conveniently managed to omit the fact that the leaflets Robert Green was about to distribute in certain neighbourhoods of the city contained names and personal information of people who’d been falsely accused by the mother of a young woman with Down syndrome. And the neighbourhoods he was targeting were the neighbourhoods in which those people lived.

So gosh, no, no idea why he might have been arrested for doing such a thing.

Belinda gets a bit muddled around the issue of the Elm Guest house:

There was the Elm Guest House inquiry, and a witness there, a guy called Nick, that in the course of the abuse that he suffered at the hands of a certain MP, Harvey Procter, I think it was, he’d not only been gang-raped by these men, but he’d also had to lie on a table, he had knives go through his arms as he lay, and then the men got on the table and gang-raped him. So it’s the sadistic element sometimes that sticks in your throat and your mind. …

The worst of it is that I think he’s now been sent to prison for giving false evidence.

Not even close, Belinda: “Nick” was not involved in the Elm Guest House allegations.

And as far as we know, his court cases are currently sub judice, no sentence having been reached. We have heard rumours that he is no longer in this country, but that is all.

‘Not everyone reading this is human’

Belinda treats us to the theory of the Nephilim, “as reported in Genesis”, who were clearly from another planet or star or something, and started “mixing their genes with ours….This was Cro-Magnon, maybe Neanderthal…”

So…did the Book of Genesis take place in Europe, then? Because so far as we know, Cro-Magnon and Neanderthal were the first known European examples of the Homo sapiens.

Never mind, she glosses over it and launches into her theory of paedophilia, which she describes as “cultural, and I think politically cultural”:

Paedophilia and…sodomy are politically convenient….It’s a tool of blackmail, it’s a resource for blackmail, and it’s also a way of creating a particular kind of political class. Because what happens when a child is sodomised, and particularly a young child?

She breaks off to assure us that she does have some “very nice homosexual friends”, so don’t worry, she’s not homophobic or anything. Phew, we were getting concerned for a moment there.

‘The umbilic region of the brain…’

When a small child is sodomised, it is a very painful, acutely painful experience. And when the acute pain of that traumatic experience happens, something happens lower down the spine…

…and some people have described that it’s like a sort of lightning storm in the brain, flashing lights, and the trauma is so great, something happens in the brain. And I think that’s the whole point of it, because what then happens is that some of the brain’s centres sort of…blow a fuse.

And particularly this very delicate one, this umbilic region in the centre of the brain, where the emotions and the feelings are centred. Whereas the intellectual, the memory and the calculation and all those faculties are all on the outside…

The what region of the brain? The umbilic region? Is that anywhere near Shatner’s bassoon?

In any case, Belinda contends, stimulation of the umbilic region represents an attack on the victim’s ability to empathise and experience feelings like a normal person. Then, these people with their damaged umbilic regions feel compelled to anally rape children in order to restore their own feelings of self-esteem, which is how child sexual abuse is passed down through the generations.

We wonder whether Belinda has ever run this interesting theory past her ex-husband, who we believe is a psychiatrist. Or perhaps she already has, which might help explain the “ex-” part.

Big round of applause for Belinda, everybody!

In any case, shortly after these fascinating revelations, she was given…we don’t want to call it the bum’s rush, for obvious reasons. The vaudeville hook? A whispered invitation to wind up her speech and let these nice people go home?

She goes, but not without a mention of her short-lived “Children’s Party”: she admits that she got “absolutely nowhere with it” and says that she was “in the clouds”, imagining that she could start a real political party.

Wait, was that a quick flash of self-awareness we just saw? Blink and you’ll miss it.

Belinda ends by noting that children have no political power, and so “I’m rather hoping that DVD…er, not DVD, DVP! will be a vehicle, whereby their voice could be better heard in society, and I’d like to be part of that”.

Wild applause and sighs of relief all round. 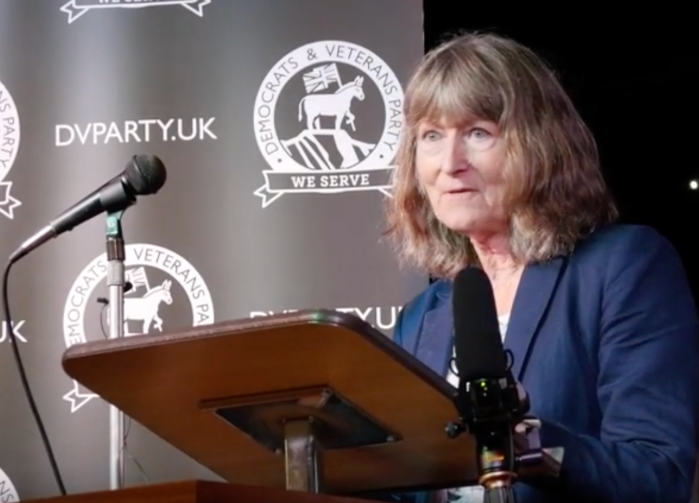