In the aftermath of Neelu and Sabine’s ‘not guilty’ verdict on charges of conspiracy to commit witness intimidation, the Hoaxtead mob enjoyed a brief moment of gloating, writing blog posts like Sabine’s “Happy ending under the Shard!” in which they celebrated their great victory.

On Monday, however, the dust had barely settled in Courtroom 2 at Blackfriars Crown Court after that morning’s extraordinary events when HH Judge Worsley issued two restraining orders against the two erstwhile defendants. In all the excitement of the Hoaxtead promoters’ apparent victory, few seemed to pay much attention to the restraining orders…except Belinda.

Belinda, it seems, has grasped what few of her minions seem to have understood: these restraining orders, once enforced, could very well spell the end of the Hampstead hoax.

For the past 18 months, Sabine, Neelu, and others have posted what they pleased — about RD, his two children, the ’20 special children’ and their families, the teachers and staff at the school, the clergy at the church, police officers, social workers, businesses — and have suffered very few legal repercussions.

Sure, some arrests have been made, but in the absence of convictions they’ve had almost no effect other than to convince the Hoaxtead mob that they are invincible and immune to any consequences. Emboldened, they’ve continued posting what they pleased.

The first hint that their reign of terror might be grinding to a halt came on Friday, when all three barristers, as well as the judge, agreed that the ‘Hampstead case’ has been a hoax from the outset.

In fact, one of the leading arguments in favour of the ‘no case to answer’ submissions on Friday was that while a normal, rational person might understand that posting witness statements online would serve to intimidate witnesses, the defendants in this case were not normal people. Words like ‘delusional’, ‘obsessional’, ‘irrational’, and ‘odd’ were used to describe the defendants and their oddball campaign.

In closing Friday afternoon, Judge Worsley remarked, in an almost off-handed way, that he was “minded to consider some restraining orders” against the defendants. This did offer a tiny flicker of hope to some of those watching the case unravel. But overall, the mood amongst those on the side of the prosecution was gloomy: it appeared that Neelu and Sabine would walk free, once again suffering no consequences for their actions.

It wasn’t until the restraining orders were actually issued that things clarified themselves: the orders mean, finally, that those who’ve been maligned and had their lives turned upside-down by the Hoaxtead mob and their supporters are now able to take swift, decisive, and effective action against their harassers.

The wording of the orders means that not only Neelu and Sabine, but any of their ‘agents’ — in other words, anyone who can be shown to have been acting on their behalf — can be stopped in their tracks, should they choose to post defamatory material about any of the named individuals or the groups mentioned.

To clarify, ‘anyone acting on their behalf’ does not mean ‘all other Hoaxtead promoters’. It does mean that if another person put up a post or video, for example, and it could be proven that they had done so on instruction from Sabine or Neelu, Sabine or Neelu would face the legal penalty.

Will there be a backlash? Quite probably. These people have been used to getting their own way for the past year and a half.

Will the backlash mean this thing explodes again, as it did after the Pauffley judgement in March 2015? Unlikely. The restraining orders will require vigilance on the part of those they protect, and it may take some time for the hoax to die out, but it is inevitable that it will.

Belinda is right to be feeling all bitter and twisted about the restraining orders: they mean her latest pet hoax is about to be flushed down the loo before her very eyes, and there is absolutely nothing she can do to stop it happening. 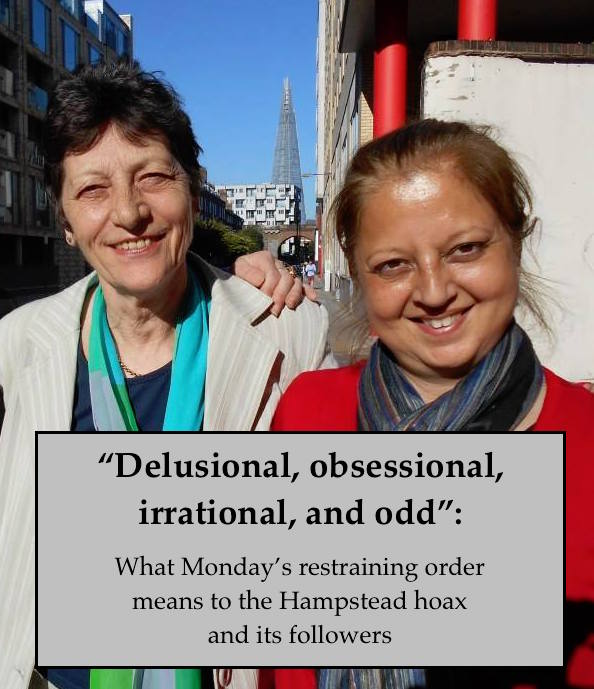