Hoaxtead mobsters are swarming out of the woodwork of late, all desperate to have Sabine McNeill freed from Bronzefield Prison, where she is currently being held while she awaits trial on 15 counts of violating her restraining order and four counts of stalking.

Even Neelu Berry, whose long, incomprehensible diatribes have tended to focus on her own woes of late, has joined the fray—and violated her lifetime restraining order while she’s at it. 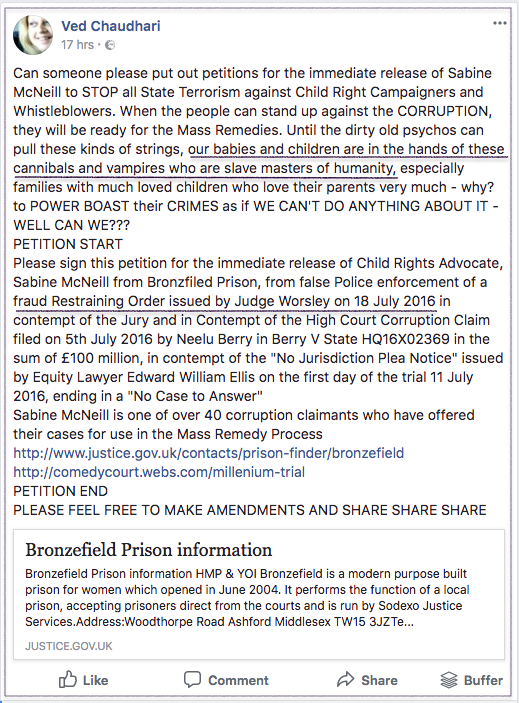 Readers who’ve been with us a while will remember that the restraining orders were issued at the end of the rather chaotic trial in July 2016, which ended in “no case to answer” during the half-time submissions. The jury was directed to declare Sabine and Neelu “not guilty” of conspiracy to commit witness intimidation, and the judge exercised his right to impose restraining orders on both defendants at that time.

While both Sabine and Neelu objected to the restraining orders, declaring them invalid since they had not been found guilty at trial, we’ve pointed out several times that in fact, Judge Worsley was well within the law in issuing the orders.

Anyone who doubts this should feel free to look it up on the CPS website, where they will discover this:

Section 12 of the DVCVA 2004 introduced section 5A into the PHA 1997, which allows the court to make a restraining order after acquitting a defendant of any offence if the court considers it necessary to do so to protect a person from harassment from the defendant.

It’s possible that Neelu missed this point of law, however, as she fled the court following an extraordinary outburst by her solicitor, Aseem Taj, who stood up and shouted, “Research the Hampstead coverup! This judge is trying to to shut my client up so she doesn’t expose the satanic cult paedophiles!”

Be that as it may, the restraining orders have not been lifted, and Neelu has been violating it left, right, and centre during the past week.

At the time they were issued, Sabine and Neelu’s barristers negotiated some of the terms on behalf of their clients. Neelu has now reframed this as

he issued a Restraining Order BY HIMSELF AFTER SENDING THE JURY HOME AT 3:30 PM ON 15 JULY 2015, ONLY TO ISSUE THE RESTRAINING ORDER AT 4 PM IN CONSPIRACY WITH THE LAWYERS AND BARRISTERS WHO KNEW THIS WAS A CRIMINAL COVER-UP, AND REMAINED SILENT.

Yes, Neelu actually claims that her own lawyers were conspiring against her, when they were really doing everything possible to keep her out of prison.

Oh, and by ensuring that the trial ended prematurely, the lawyers also robbed Neelu and Sabine of the opportunity to address the jury from the witness stand—a slight which both defendants said they resented mightily.

Funnily enough, neither Neelu nor Sabine has ever referred to one very important aspect of their 2016 trial: all three barristers—two defence and one prosecution—stated that they agreed with Mrs Justice Pauffley that the allegations of Satanic ritual abuse and cannibalism which Sabine and Neelu were making against the families, teachers, clergy, and others in the community were untrue.

This is not a trivial point.

In taking this stance, Sabine and Neelu’s barristers were speaking on behalf of their clients—neither of whom piped up and said, “Oh no, that’s not right, I still believe all that”.

This means that for the purposes of their trial, both women had repudiated their belief in the Hampstead SRA hoax, only to mysteriously regain it once the trial was done.

And now, Sabine is in custody, and Neelu is once again spouting off about “cannibals and vampires who are slave masters of humanity”. While we cannot comment on what Sabine might or might not believe, it certainly seems that Neelu has been going out of her way to make a liar out of her barrister.

Perhaps in view of her current housing difficulties, prison seems like a viable option to her?