Well, we started out yesterday thinking that we would write about the ongoing money-making charade that that is the International Tribunal on Natural Justice, but as sometimes happens, we got completely sidetracked by a comment from one of our readers:

Here’s the tag Sheva’s talking about:

It was the mention of Heather Ann Tucci-Jarraf that did it: we knew we’d seen that name recently, but where…?

Then we remembered: Tucci-Jarraf is a prominent U.S.-based freeman on the land/SovCit type, who was recently tried and found guilty of money laundering.

She had posted a video which purported to tell viewers how they could access a “secret savings account” by taking money from the Federal Reserve, according to the Daily Beast. In mid-July, she went to Knoxville, Tennessee to assist Randall Keith Beane, who had attempted to purchase a fully-loaded recreational vehicle (price: just under $500,000 US) with certificates of deposit he had “purchased” using the FRB / SSN tactic. Both Beane and Tucci-Jarraf were eventually arrested.

Tucci-Jarraf is currently in prison, awaiting sentencing of up to 20 years, while Beane could get up to 30. And we assume he had to give back the recreational vehicle.

Looking further into Tucci-Jarraf’s background, we find she was the founder of a FOTL/New Age group called “One People’s Public Trust”—doesn’t that sound, well, trustworthy?

The OPPT believes that it terminated and foreclosed all governments in the world, leaving its belief system and leadership as the sole legitimate legal authority. It then terminated itself in approximately April of 2013. It then continued on in a different form, although it kept many of the key people and ideas. The One People Community was then formed in Aouchtam, Morocco. It has since fallen apart, although some individuals associated with the Community continue to live in Morocco.

Isn’t that where Naima Dawn Feagin, aka Hope Girl, set up one of her “compounds” in which to pretend to build and test the fraudulent Quantum Energy Generator, back in the spring/summer of 2014?

Indeed it was! In fact, we have this lovely group photo of some members of the One People Community, in all their FOTL/New Age glory. Have a look—we’re sure you’ll see some familiar faces: 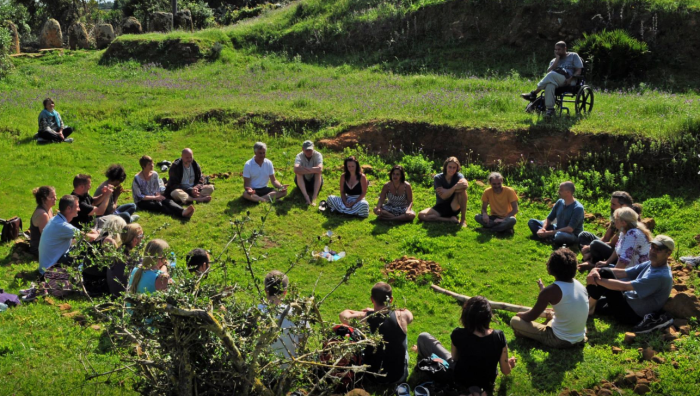 Your eyes do not deceive you. That would be Ray Savage in the yellow shirt. 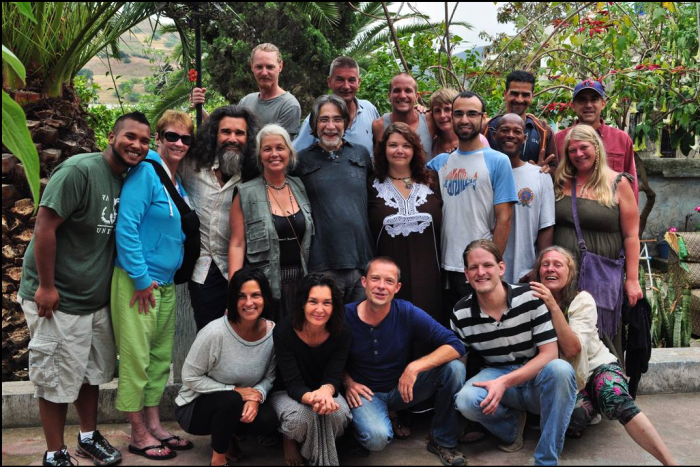 And as it turns out, Tucci-Jarraf had a few friends helping her to promote her wacky ideas, even after the original Aouchtam community disintegrated and dispersed. 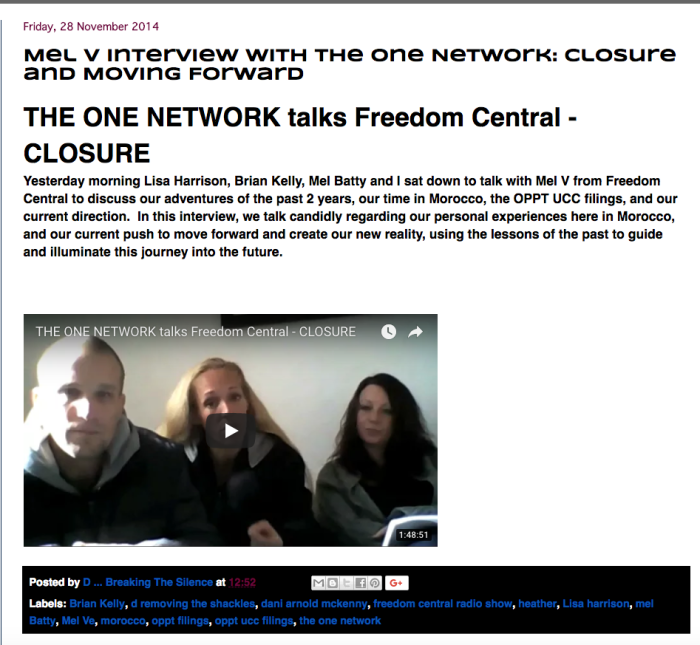 If you feel like listening to nearly two hours of people explaining why their social experiment failed but the OPPT IS TOTALLY REAL AND NOT A FRAUD AT ALL, you can watch the whole thing here:

Following on from an interesting 2 years which started with the UCC filings and the One People’s Public Trust, also known as the OPPT, so much has happened to the people who took up the gauntlet and traveled around the world to inspire a generation of freedom seekers, by educating them as to what they are, their true value, and seeking a tangible way for us to gain our freedom in this present reality.

I was honoured by the opportunity to catch up with Lisa M Harrison, Brian Kelly and Dee, to get a clear picture as to the facts regarding their journey, their time in Morocco spent with Heather Tucci, and their understanding of the truth with regards to the entire OPPT journey. It is also great to get to know the further extended members of The One Network, being Mel B, who also spent time with the crew in Morocco.

I have been very close to this story personally, being close to Lisa, sharing mutually appreciating interviews and having interviewed Heather Tucci and Dee, and having worked with Brian Kelly on the OPAL (One People Absent Limits) Tour.

Furthermore, the OPPT filings was followed on by the introduction of Swissindo to the global picture, and if anybody has been following my personal journey, you will know that I have been a delegates of Swissindo since June 2013, and currently hold the position as Head of Media within the God Sky Earth Project.

Freedom Central travelled to Indonesia in June 2014 to meet Mr. Soegihartononotonegoro, the King of Kings, who had bequeathed 6 million to every person on earth, following on from the “system being foreclosed” as stated by Heather Tucci based on the UCC filings of the One People’s Public Trust.

It is great to get a clearer picture from those at the heart of this story, who spent time getting close to Heather, and who got to see the truth for what it is. Hopefully this will give some closure on this chapter of the story, as the circles of light who have overcome this cosmic gauntlet, have pulled together to begin an amazing new journey.

We look forward to 2015 and encourage people to keep an eye on The One Network, because they are a strong team, and we are honoured to be able to work with them, as they have much in store for the media consuming truth seeker and believers of a better world.

To bring it all back full circle, we have Tucci-Jarraf and Sacha Stone promoting the fraudulent OPPT on The One Network: 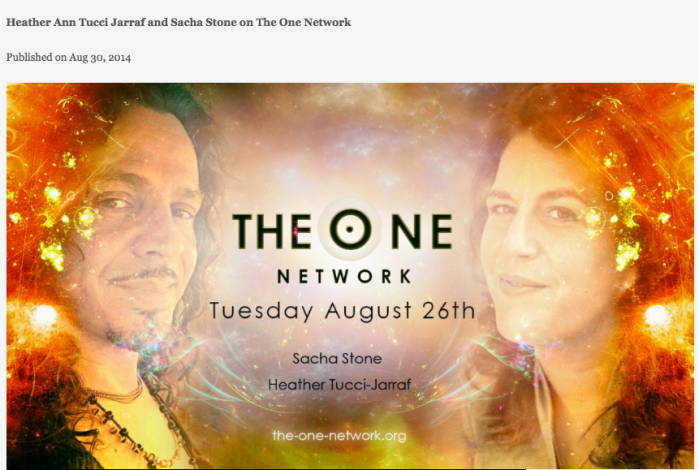 Is your head spinning yet? Or are we the only ones whose minds are well and truly boggled by the intricate network of conspiranoids, FOTL woo-believers, fraudsters, and enablers?

45 thoughts on “An intricate network of fraudsters”