More news from the Neelu front: readers will recall that she had unwanted visitors on 9 January, when a team of police and bailiffs attended her home in order to evict her and her family. This came in the wake of last spring’s repossession order for having defaulted on the mortgage of her house.

Neelu, her sister, and (we think) her son put up a good fight on 9 January, driving off the invaders…temporarily. (Tip for mortgage-holders who don’t feel like keeping up with your monthly payments: apparently it is possible to forestall the inevitable, at least temporarily, by shrieking about the Queen, following bailiffs about the house yelling at them, and demanding “have you got a warrant or not?” over and over until they get fed up and leave.)

However, the front door of her house sustained some injuries, and it was clear that although eviction had been held off temporarily, this time the bailiffs and police meant business. When that business was to take place, however, remained unclear.

Yesterday, the other shoe dropped. Sort of. 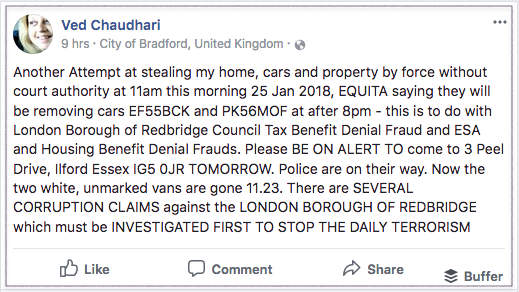 Is it just us, or does it sound to you as though Neelu is hoping to mount a Tom Crawford-style loony-a-thon to help her keep her home? If so, someone should probably remind her that although initially Mr Crawford’s 250-strong protest group managed to keep the bailiffs from seizing his house for a while, in the end he and his wife were evicted.

According to a video which Neelu made about an hour after posting the above, she received two notices stating that her two cars would be removed after 8 p.m. last night:

For those who are unable to see Neelu’s video on Facebook, Spiny Norman has kindly made a copy which you can find here: https://drive.google.com/file/d/15UE5NDulXa1kJX3uUFgJmfauo6MkH_SA/view

Here’s a sample, for those who don’t quite feel ready to subject themselves to a full-on Neelu rant:

They came to evict me from my home forcibly, due to housing benefit denial frauds by the council, Redbridge council, which when Edward Ellis, equity lawyer, tried to serve them with his documents for corruption, of criminal cover-up of murders and firearms thefts by [name redacted] in the Romford County Court, organised criminal, convicted criminal, with at least 54 convictions, was occupying an office in the Romfort County Court as an immigration lawyer, and growing drugs on the farms in Sussex.

Did Neelu fall for a scam?

But then, speaking of the person she named above, she says:

They’re now recruiting him to do eviction fraud, so if you think you’re going to be evicted you pay £10,000 cash, he doesn’t turn up to any court hearings, he doesn’t turn up on the day, he sends the bailiffs in, and you get evicted. Now many people have been robbed by him, okay, we’re talking about hundreds of cases. Then he started doing the car insurance fraud. So he says, ‘I’ll buy your car off…your insurance off your car for nothing and then I’ll do the insurance’, doesn’t do the insurance, gets you convicted for no insurance.

The best we can make out is that Neelu might have paid this person a fee, thinking he would be able to keep her from losing her house and/or car(s), and he double-crossed her, leaving her both car-less and house-less.

Why the poor Jehovah’s Witnesses? Hey, this is the Planet Zogg. Why the hell not?

(Question: if Neelu was able to raise £10,000 to pay this dodgy eviction fraudster, why did she not just use it toward her mortgage?)

She finishes the video by asking viewers to call officials on her behalf, quoting various case numbers…because she’s busy with another case?

Stay tuned: according to Neelu, today’s events could get “quite messy”. As if there were any doubt.