It should probably come as no surprise that when a noted conspiracy enthusiast runs down the curtain and joins the choir invisible, his fellow conspiraloons will react with allegations that his demise was “not accidental”. Sure enough, yesterday’s discovery that Patrick Cullinane had expired and gone to meet his maker stirred up a hornet’s nest of paranoid accusations and counter-accusations.

We think first mention must go to Tracey Morris, who declared Mr Cullinane’s death a murder right off the top:

Of course Debbie Stimson was first to label the death “so suspicious”, but Tracey crossed the finish line in style: “They knew he was dead they are murdering bastards”. She didn’t define who she meant by “they”, but isn’t it obvious?

Them. You know. Wink’s as good as a nod to a blind man, innit?

John Paterson, never known for his tact and discretion, took it a step further and started naming names, putting it about that Angela Power-Disney was behind Mr Cullinane’s death: 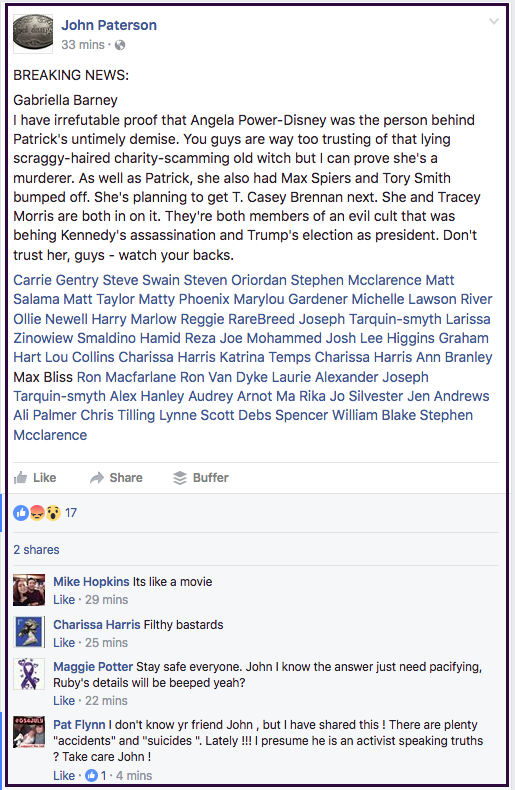 Butlincat, too, appeared ready to accept this version of events: 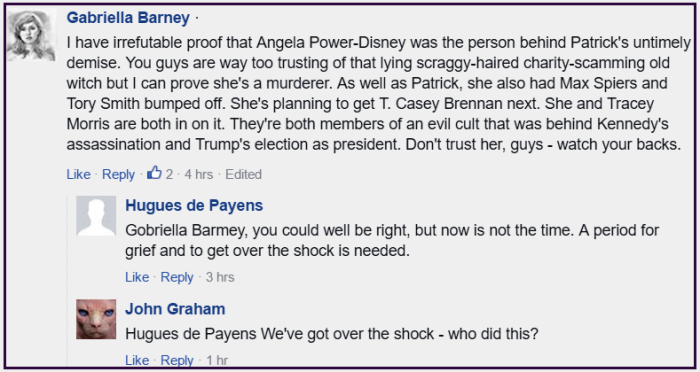 McKenzies Devils offered their own take on Angie’s alleged involvement:

Meanwhile, on Andy Peacher’s BlogTalkRadio livestream last night, Neelu proclaimed in all seriousness, “(Cullinane) could still be alive. Just because he’s cold doesn’t mean he’s dead. People can be frozen for months on end and then come back to life when they’re defrosted.”

She and Andy had concluded that because the police officers on the scene had declined to declare Mr Cullinane demised, there was something fishy about his death.

They spent more than an hour on the telephone, along with John Paterson and others, harassing various ambulance and police emergency services, attempting to have an ambulance sent to Mr Cullinane’s residence…and preventing them from attending to living people who might have required emergency services.

As Mrs Overall pointed out yesterday, “I’m angry that people are wasting police and ambulance time like this. I’m sure there are those amongst us who will let the police know about this and what’s going on. If I ever come face to face with Neelu I will want a remedy and she better have 5 trillions squids on her!”

Why the ambulance wasn’t necessary

For those frothing at the mouth because the police attended and didn’t call for an ambulance: that’s how it works when they find someone who is obviously dead and beyond human intervention. The police are not qualified to declare someone dead, even if they have obviously been deceased for some time. Even when they are in a skeletal state.

That job is up to the coroner. He or she will attend the scene, declare the death, make some preliminary observations, and have the body taken to the morgue, usually in an unmarked vehicle.

And we can tell you from personal experience that the police will tape off any area where an unexplained death has occurred. Many deaths happen this way: strokes, heart attacks, ruptured aneurysms, internal bleeds of one sort or another, hypothermia…not all causes of death are glaringly obvious at first glance.

Once a natural cause of death has been confirmed, the tape comes down, and the body is released to the family for burial. (Granted this might differ from procedures on the Planet Zod. Hard to say, really.)

But there’s nothing “mysterious” or “suspicious” about the lack of an ambulance at Mr Cullinane’s residence, especially given that he hadn’t been heard from in a few days, his letter-box had mail in it, and the lights were on in his home. The known facts paint a picture, and it’s a very ordinary one.