Since Patrick Cullinane’s death was announced on Saturday, the conspiraloon community has been awash with rumours, speculation, and dizzying u-turns and counter u-turns. Depending on who you listen to and what time of day it is, Cullinane is either dead (of natural or unnatural causes), possibly dead/possibly not dead, or a “missing person” (either dead or alive).

Seriously, he’s turned into the Schrödinger’s cat of the conspiranoid set.

Despite Tracey Morris’s assertion that she spoke to Cullinane’s sister on Sunday, and was reassured that a) he was dead and b) there were no signs of foul play, various people have continued to play out their own fantasies regarding Cullinane’s fate.

Neelu, for example, contacted Ealing police in an attempt to ascertain…we’re not really sure what, really: 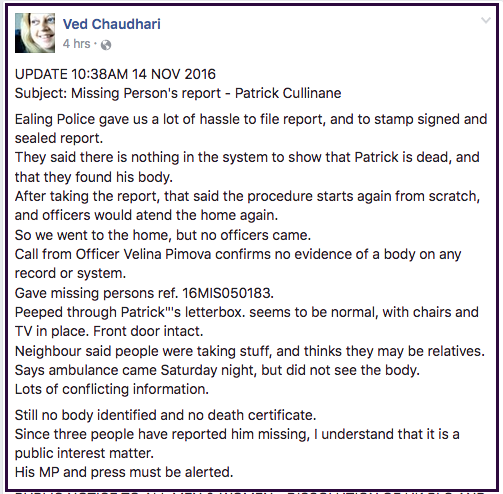 Unsurprisingly, Ealing police were unable to state that they had found Cullinane’s body…because that job had gone to Harrow police. However, never let it be said that logic has ever stood in the way of Neelu once she gets the bit in her teeth.

And that’s why there’s now a “missing person” report out on Cullinane, despite the fact that he is no longer with us.

Whoops, cancel the aforementioned. Neelu has now done a u-turn and is accepting that Cullinane is deceased:

Oh, but she plans to “make a connection with Patrick Cullinane from the other side”, though she cautions that it “usually takes 72 hours for the soul to orientate itself to his new fifth dimension abode”. Good to know.

We assume that Ealing police can now call off the manhunt?

To no one’s surprise, Angela Power-Disney devoted yesterday’s CCN live-stream thingy to trying to stir the hornet’s nest. Angie claimed that “there are bent coroners, you know” who will sweep obvious murders under the carpet, and that if in fact Cullinane died of a heart attack, it was likely remotely triggered by microwave weaponry.

Meanwhile, guest Tracey Morris seemed torn between fantasy and reality: she reiterated her story about having spoken to Cullinane’s sister, who told her that the death had been a natural one, but also veered off into several “if he was murdered and I find who did it I will hunt them down” rants.

John ‘Wellyhead’ Duane sat in the corner mumbling for the most part, coming out at a few points to assert that Cullinane had been a god among men, his own personal mentor, and just a darn fine fellow all round.

And there you have it, folks: the current state of play in the Cullinane Sweepstakes. Stay tuned for further developments!