Twenty-seven years ago, 96 people, aged 10 to 67, went off to watch a football game…and never came home.

Yesterday the families of those people, having suffered more than two and a half decades of pain, loss, and anger at the public vilification of their loved ones, watched as the Hillsborough inquest jury delivered its final verdict: the 96 victims were unlawfully killed; and the behaviour of the fans did not contribute to the disaster.

After all, the Hillsborough families suffered the deaths of loved ones—sons, daughters, brothers, sisters, fathers, mothers. Their loved ones were labelled ‘hooligans’, lied about, blamed for their own deaths, and cast aside by those in power who ought to have been defending them.

The Hampstead families, meanwhile, have been accused of rape, murder, cannibalism, and child-trafficking; they were vindicated in a family court hearing that only seemed to fuel the flames of their accusers. Police have made efforts to help, but the past year has brought little satisfaction, and the accusations still hang heavy on the internet, seemingly impossible to expunge completely.

But the groups share something in common: both were dragged into situations not of their own making, forced to cope with unfounded, even evil, allegations that have had a profound impact on blameless, decent people.

In this article, Julie Fallon, sister of Andrew Sefton, who was one of the 96 fans killed during the 1989 Hillsborough disaster, describes how the Hillsborough families coped…and what they have lost in the process.

We think that much of what she has to say will resonate with the Hampstead families. The Hillsborough families’ struggle lasted 23 long years, but as Ms Fallon says:

We have paved the way for other ordinary, decent people in this country, who also find themselves in extraordinary circumstances of someone else’s making, to tread the path to truth and justice. We have swept the road before you, heaved boulders, checked for mines, swallowed dust, buried our dead at the roadside and, at times, crawled on our hands and knees, so that the path is now a little easier for you to walk on.

And in the end, that’s what counts. 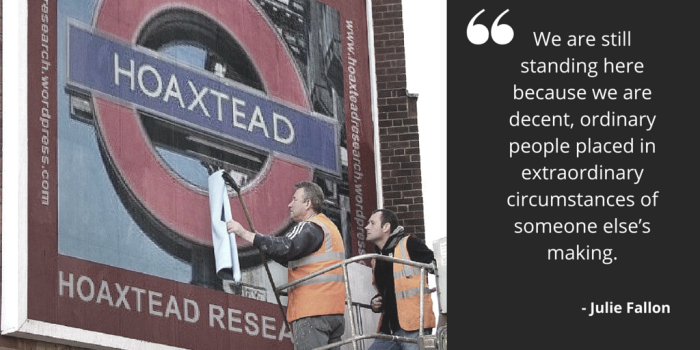 29 thoughts on “Still standing: The families of Hampstead”