Yesterday several readers contacted us to let us know about a very interesting video which had just appeared on the “Democrats and Veterans” YouTube page.

The video features former Met DC Jon Wedger, about whom we have written in the past. What interested us this time was not his canned spiel, but the fact that we instantly recognised the person who introduced him to the audience.

She only appears in the first 1–1.5 seconds of the video, but it’s unmistakably Belinda McKenzie:

Lest any doubts remain, Wedger pats her on the arm and says, “Ah, thanks Belinda” as she ducks out of camera range and he begins his speech.

This tiny vignette raises so many questions for us:

First things first: the Democrats and Veterans Party was founded in 2018 by Gavin Felton, a former UKIP member; the party’s current leader is John Rees-Evans, who took a run at the UKIP leadership in 2016, when he came third with 18% of the vote. He tried again in 2017, coming in fourth.

Rees-Evans differed radically from the other candidates, advocating the introduction of direct democracy first within UKIP and then seeking to use it with intention to cause massive reform of the entire UK political system.[7] He also supported capital punishment for child killers and sexual abusers of children, but only if the victims were “pre-pubescent” and looked under the age of 18 (the age of consent in the UK is 16 years), saying that 13-year-olds were “fair game for the current punishment”.[8] Rees-Evans has said that he opposes same-sex marriage.[9]

He has been described as “the last of the Faragists”, and it seems fair to say that his fellow UKIPers felt that he was too extreme for their party.

We confess that we first heard of Rees-Evans following an unfortunate episode at an anti-UKIP rally, when he answered a question about his party’s stance on “whether some homosexuals prefer sex with animals” by launching into a story about how a randy donkey had attempted to rape his stallion.

The Democrats and Veterans Party platform includes immediate withdrawal from the EU, direct democracy (which would involve putting proposed legislative changes to national referenda), anti-immigration policies, and programmes to care for veterans.

The party’s slogans reflect a populism similar to that of the current U.S. regime’s (sans building a wall to keep Mexicans out, though we make no guarantees that they won’t adopt this at some point): 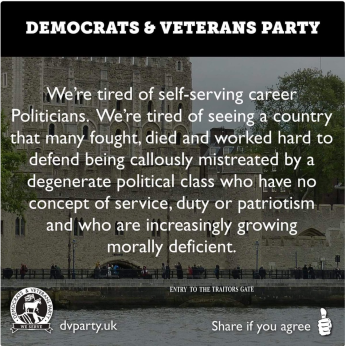 In a 2015 interview with Vice News, Rees-Evans described his vision for the country:

His childhood was a happy one, but it was pretty disciplined. “If my mother called me, and I walked, I’d be smacked with a horse whip,” he recalled. “A riding crop. Not a whip, a crop.”

I suggested that this sounded pretty painful. “It is. But you’re not going to commit the same offense twice unless you’re really stupid. So if my mother called me I would run. As far as she’s concerned, a child shouldn’t keep an adult waiting.”

Rees-Evans made sure he was never late for his mother, and he was rarely punished. “Because I believe that she knew that I was totally obedient, that meant that she could give me far more liberty,” he said.

“That is the way that I think a country should be run. Where basically the individual should have freedom to do whatever he likes so long as it doesn’t damage somebody else. But the moment he does damage to somebody else, he should be severely dealt with. Not kind of punitively or spitefully or aggressively, but just as a matter of course, just to enforce procedure and to remind him of the seriousness of his breach.”

Oddly, it seems that Jon Wedger has thrown in his lot with the D&V Party: the party’s webpage features a 50-minute long video with Wedger doing his usual spiel, under the heading, “How We Fight Paedophilia in Britain“.

So Wedger’s presence at the party’s conference isn’t surprising.

However, we still don’t know what Belinda is doing there. For one thing, Rees-Evans’ stated policy of capital punishment for child sexual abusers conflicts with Belinda’s past statements that paedophiles should be placed in the zoo until they repent, and then they should be reintegrated into society.

Also, whatever happened to Belinda’s grandiose plans to launch a “Children’s Party”? (Gosh, was that only last year?) 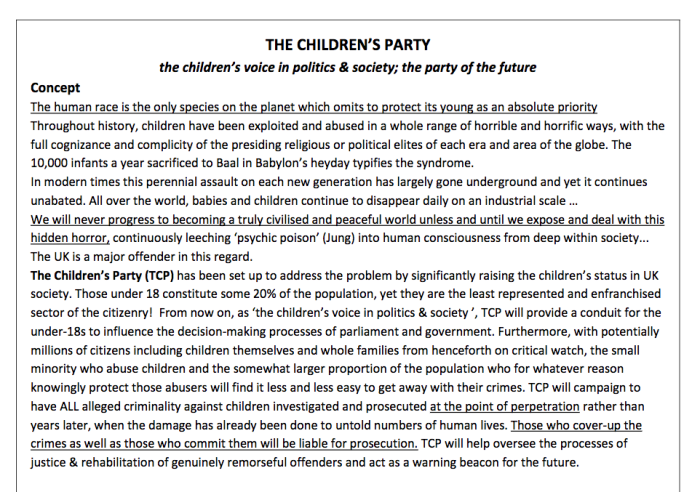 Funnily enough, we do remember Belinda mentioning to her friend Mark Chambers a couple of months ago that she was now working full-time. Could it be that she has decided to throw over her plans for a “Children’s Party” and instead work on behalf of the V&D Party?

We’ll be keeping an eye on this one!