We were going to bring you the stunning conclusion of the Jean-Clement Yaohirou audio transcript today, but honestly, this was just too good not to share.

As we reported recently, Matt Taylor was found in contempt of court for violating  the conditions of a civil injunction against him, in respect of his harassment of Sussex Police and Crime Commissioner Katy Bourne. Taylor’s sentencing hearing took place yesterday afternoon at the County Court at the Royal Courts of Justice before HH Judge Monty. 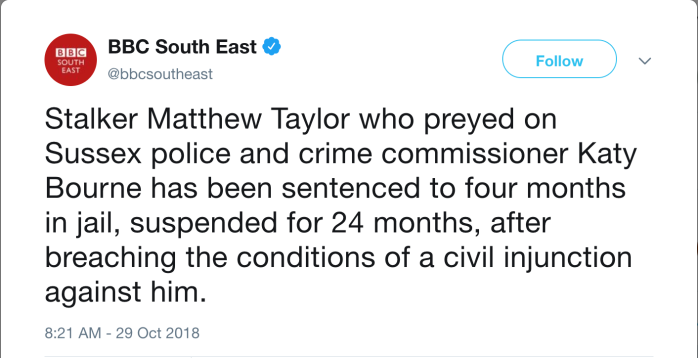 Of course, the first thought to cross our minds was, “How long before he breaches?”

As it turned out, not long, as you’ll see in this video by Taylor’s friend John Paterson:

Here we see John Paterson, dressed (perhaps for Hallowe’en?) as Inspector Clouseau, who thinks he has spotted “someone from Hoaxtead Research” outside the gates of the RCJ, news cameras at the ready. (We’re flattered and all, John, but our equipment runs more to a laptop and a coffeemaker.)

As it turns out, the “Hoaxtead people” were actually from the BBC, preparing a spot for the evening news. Matt strode over, looking quite natty and not at all stalker-ish. And then he started talking.

“Do you regret what you’ve done?” asks the reporter.

“Absolutely”, says Taylor. “It’s been a long process, I’m looking forward to putting this all behind me, and moving on with my life, and making sure this never happens again”.

One could be forgiven for thinking that this nice little speech might have come from a victim of stalking, not the perpetrator. But wait, there’s more.

The reporter said, “The judge described the harassment of the commissioner as extreme. Do you accept that?”

“No, I reject that, um, and…you know, I don’t want to say too much, because I’ve just been on the precipice of going to jail. So I’d like to answer no questions about that….Katy Bourne knows how I feel about it, so please, ask her”.

The reporter was clearly taken aback, and asked Taylor again whether he regretted what he’d done; he responded that he did, and then made a tinned apology to Bourne. In the classic TV interview brush-off, the camera operator asked Taylor whether he could get a shot of him as he walked off.

Taylor started to oblige, but then Paterson stuck his honker in and began regaling the reporter with his own grievances against Bourne, which mostly seemed to amount to the fact that he had been jailed for 21 days due to a malicious communications offence against her.

Not to be left out, Taylor chimed in, “Katy Bourne filed new allegations about me…that I filmed her outside her house, which I found quite stressful myself, because I never filmed her outside her house. And these were allegations that weren’t made originally on the 25th of April court hearing. She also made allegations that I was sexually obsessed and fixated with her. Again, these are new. and so I felt aggrieved because new allegations were being made about me, and I wasn’t able to give my side of the story”.

But that wasn’t all. Once he’d started, Taylor seemed unable to stop.

“I’ve moved on, I’m sure Katy Bourne will move on, actually, I’d love to be friends with Katy Bourne at some point…”

Paterson interjected, “Are you serious?”

“No, no, I say this, John, because ultimately I’m still interested in politics”, said Taylor.  Noting that he had been a parliamentary candidate in 2015, he said, “I’m sure our paths will cross in the future, and even though this will sour our relationship, I want this…so we can both put this behind us, and we can move on. Things were said on both sides, and like I said…I know they found the decision against me, but in my heart of hearts, I’ve never stalked anyone”.

Unfortunately, Paterson did not film the reporter’s response, but we hope it was along the lines of, “So…do you actually understand the meaning of ‘do you regret what you’ve done?'” 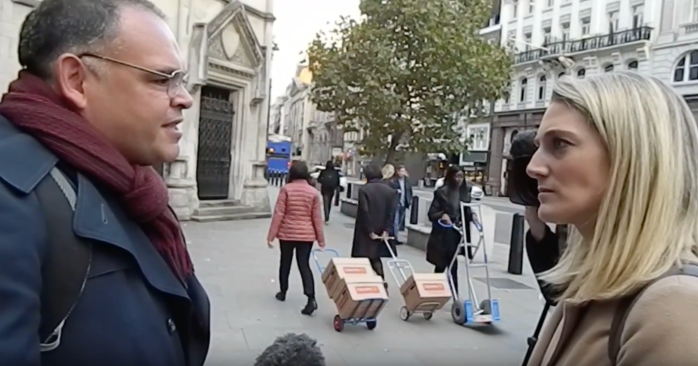 52 thoughts on “UPDATE: Taylor gets 4 months suspended, blows it within minutes”