Following a two-day finding-of-fact trial at Leeds Crown Court, a jury took less than an hour to conclude yesterday that 48-year-old Melanie Shaw was guilty of three charges of arson.

All three incidents took place whilst Shaw was an inmate at HMP Foston Hall in Derbyshire and HMP New Hall.

Reporting for ExaminerLive, court reporter Stephanie Finnegan noted that while Shaw had a psychiatric examination and was found unfit to stand trial,

…a jury of seven women and five men spent less than an hour reaching the verdict that she committed three counts of arson being reckless as to whether property was damaged or destroyed.

During a police interview Shaw called her fire-setting a “cry for help” as well as a suicidal gesture, stating that her “human rights (were) being abused”.

She set two fires at HMP Foston Hall in February 2018.

Following the first, which damaged bedding in her locked cell, Shaw claimed that the fire had not endangered anyone, as “the building is made of steel and concrete”. She stated that she had set the fire as a “peaceful protest”.

She was then moved to a segregation unit at HMP New Hall. When she emerged from the locked cell, she blamed the fire on a non-existent person named “Lorraine”. While she was changing into clean clothing, she produced a lighter from her bra. At the time of the fire, New Hall allowed smoking, and lighters were available at the canteen.

A fourth charge of arson was dropped prior to the trial, and a charge of sexually assaulting a fellow prisoner was dropped during the trial, as the prosecution produced no evidence of it. Sentencing is scheduled to take place on 13 November, following a second psychiatric assessment.

‘The troof, the whole troof, and nothing like the truth’

Prior to yesterday’s verdict, conspiracy theorists had loudly proclaimed that we could expect to hear nothing of Shaw’s trial, as it had been covered up by whoever it is that usually covers such things up.

Then again, perhaps not.

However, when Stephanie Finnegan, who had covered the trial, tweeted out the verdict, she received the usual response: 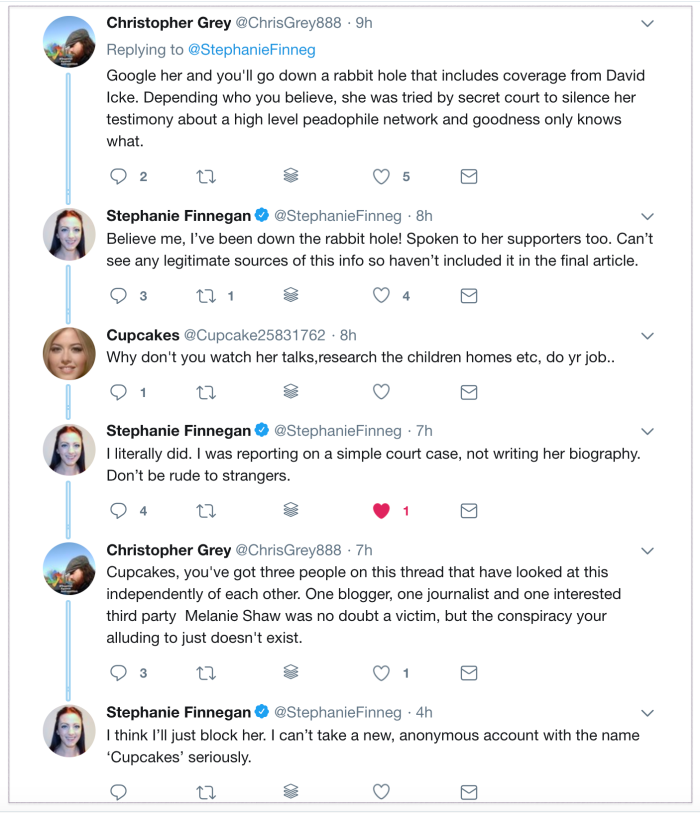 There’s more, but you get the idea.

As the news of Shaw’s conviction spread, others jumped on the “she wuz framed” train: 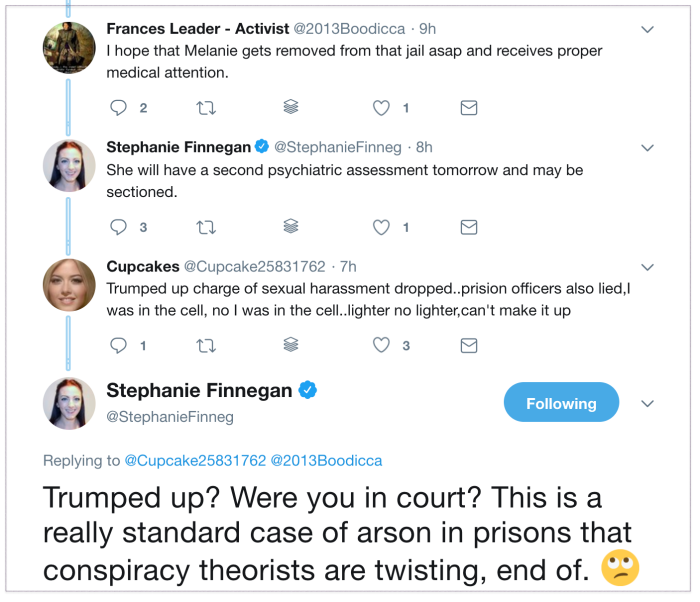 Sadly, the term “conspiracy theorist” was used, and that was the end of that:

Uh-huh. Cool story, but untrue. You can check out the real story here. The term “conspiracy theorist” was used loooooong before 1960. Just sayin’.

We expect yesterday was just the beginning, and we’ll be hearing lots more about how it was all a stitch-up, how the “secret courts” are conspiring to take away people’s freedom to set their prison cells on fire, and how Tommy Robinson thinks Melanie Shaw is totes legit and therefore so should we.

Although we understand that Brian Gerrish, chief standard-bearer in the “Melanie Shaw is not a mentally ill woman but a national hero for some reason that’s not quite clear but just trust me, she is” war, has been informed of the verdict, he has not yet deigned to comment. Probably needs time to think up an explanation of why the court case was covered by media. Or something.

And we really do hope that Shaw will receive the care she so urgently needs, in a secure setting.