When we first encountered ex-Met police officer Jonathan Wedger earlier this year, we were inclined to offer him the benefit of the doubt. He seemed so earnest, so utterly convinced that he’d been hard done by…and really, who could resist his earnest puppy-eyed stare?

Wedger, who refers to himself as a “police whistle-blower” who was forced out of his career by the corrupt police establishment who threatened him with dreadful consequences if he continued investigating organised paedophile rings in London, began campaigning on his own behalf in 2017.

However, it wasn’t until an interview with UK Column’s Lou Collins in January that his campaign seemed to gather serious momentum. Some parts of this interview seemed credible to us; others, far less so.

While we have no doubt that Wedger was in fact a Metropolitan police officer, several aspects of his story fail to stand up to scrutiny.

Was Wedger really bullied out of the force?

We’ve read several versions of how Wedger left the Met. He alleges that his departure came about because he raised concerns that a child sexual abuse ring was being covered up.

After suffering a breakdown in 2016 brought on by post traumatic stress disorder (PTSD) caused by the wrongful treatment he received from the Police establishment, Jonathan Wedger has begun a lawsuit against Scotland Yard for damages.

He seeks compensation for the psychiatric injuries incurred from work-related stress brought about by the bullying he received for exposing child abuse and corruption at the highest levels of British society. He claims the bullying began after he filed an intelligence report alleging that police colleagues were covering up the prostitution and pimping out of girls as young as nine. The claim includes requested compensation for being forced into early retirement after 23 years of honorable service with the Metropolitan Police.

In his interview with Lou Collins, Wedger described this alleged scenario with his commanding officer, which he claims took place upon his return from an enforced summer vacation:

And he turned round to me and he said, ‘Well that’s a problem; you’ve exposed it.’ He said, ‘We knew you could dig, but we never knew you could dig that deep.’ He then said, ‘What you’ve exposed is gonna F us, past, present and future. This cannot, and will not, ever get out.’ He said, ‘If you mention a word of this, you will be thrown to the wolves.’ He then said, ‘You will lose everything – and that means your job, your home, your kids, you will lose it all. You need to shut your F-ing mouth.’

And I was just dumbstruck. I was like, ‘For real?’

And he said, ‘We never thought you would dig this deep. You have no understanding how deep this goes.’

For some reason, as we read this we were put in mind of the lantern-jawed J. Jonah Jameson…. 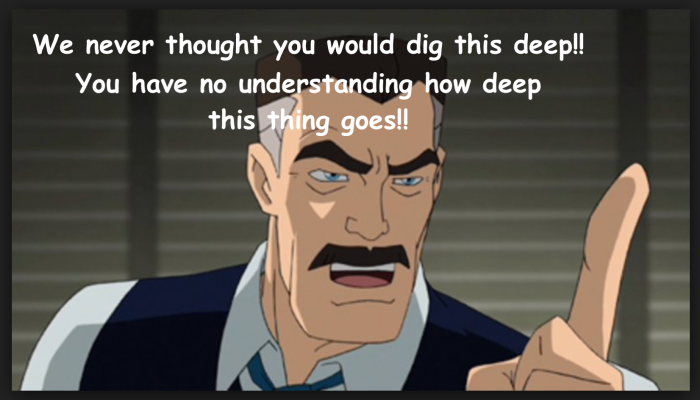 …but maybe that’s just us.

However, as we reported last month, Wedger’s description of his departure has now expanded to include allegations of Satanic ritual abuse. He and Bill Maloney discussed this during one of his videos:

Bill: It’s also the subject itself, Jon. People are frightened of that subject. And something that we, both you and I believe goes on, well we actually know it goes on, is something called S R A. Satanic Ritual Abuse. And it goes on, Jon…

Jon: Well, it’s the elephant in the room. Any act of sexual (fondness?) of a child has got a big Satanic element to it, you know, and it’s one of those things that the more you look into it, the more it crops up, y’know, and there is an organised element to it. Now initially, I didn’t really come across it, but then it did start cropping up. And the more we look into it now, the more it’s behind so much. And you’ve got to look at, why are these people clamping down on this? And these are people in positions of privilege and power. One of the things that really sort of changed it was when there was a list that was compiled that we class as the RAINS list.

Bill: Oh! You said the name! [both laugh]

Jon: It’s an acronym. It stands for Ritual Abuse or something like that, I can’t remember. And it was such a comprehensive list, it was so well put together…

Bill: What kind of people were on it, Jon?

Jon: It was a mix. I mean there were names I never heard of…

Bill: I don’t mind so much about the names, I mean what they’ve done, where they come from, were they…there was politicians on there now…

Jon: There were lords, there were members of the clergy, there were drug addicts, there were just normal standard people, a lot of the people come from the care system…

Speaking of Maloney, Wedger stated in one of his recent videos that he has known him for eight years; he says the same about Brian Gerrish of UK Column. He seems to have met them at the 2010 CSA survivors’ march in London, and claims to have spoken favourably of Maloney, at least, to his colleagues at the Met.

Frankly, this seems to us like a career-limiting move, but what do we know?

Since leaving the Met, Wedger has broadened his troofer horizons, linking up with such luminaries as Robert Green, Wilfred Wong, Sacha Stone and his fake “ITNJ” nonsense, the Fresh Start Foundation, and others.

We noted this comment on the BarthsNotes blog a few weeks ago:

I attended a CSA event at the houses of commons hosted by whiteflowers.

I was one of several police officers that was in the audience, we had all been involved previously with child protection matters and had been ignored or victimised.

We were a little surprised to see this Mr Maloney attend the meeting and attempt to disrupt the meeting, people were scared of him, walking around and continually swearing, the chair of the meeting who I think was Liz Davies had to try and calm him down.

What was worrying was that he came with this officer Jon Wedger who was still serving at the time and Mr Maloney appeared to be using him as a puppet. Mr Wedger was clearly unwell and didn’t say a thing with Mr Maloney pointing at him identifying him as a police officer and what the police were doing to him.

Mr Wedger appeared to be either under heavy medication or under Mr Maloney’s spell, very odd.

Mr Wedger appears to have taken on Mr Maloney’s persona and is acting in the same way with swearing and becoming aggressive, again this seems odd.

His advertising states that it is to help other police whistleblowers as well.

The information that he is giving also appears to be embellished, he has never worked at New Scotland Yard or worked globally, we are not sure if he was even a DC, from enquiries we think he was a PC on child protection.

He was not on no pay for three years but was off sick whilst under investigation for various matters. Whilst off sick he was involved in various other businesses.

He now has a web shop advertising his merchandise and it is felt that he will be making a living out of this, it is not for proper charitable purposes. It is also not known who is funding his venture.

He was given an ill health pension because the MPS became exasperated with him and he was putting victims of child abuse at risk.

While we cannot verify all the content of this comment, we can confirm that Bill Maloney attended at least one White Flowers event at the House of Commons in 2015. If anyone reading this was in attendance at the meeting and could confirm further details, please let us know. Did Wedger really receive a commendation for the Baby P case?

We have been able to find no confirmation that Wedger ever worked on the 2007 Baby P case, let alone that he received any sort of award for it. The only sources we were able to find originated with Wedger himself, though there was also an article by James Fielding in The Express.

Fielding, incidentally (or perhaps not), has been responsible for a plethora of histrionic “Satanists behind every door” reports, including the original Bill Maloney/Chris Fay production in which they coerced Andrew Ash into making allegations about a person they identified as Leon Brittan. Let’s just say that Fielding is the SRA-promoters’ go-to guy when it comes to getting their message into the mainstream media.

We did find an old photo of a much-younger Wedger, dressed in his PC uniform, receiving an award of some sort. However, this could have been for exemplary attendance or shiniest shoes, for all we can tell. What about the ‘child prostitutes’?

One of the turns of phrase which struck us when we listened to Wedger’s interview with Lou Collins was his persistent use of the term “child prostitutes”. This struck a sour note, as it is not possible for a child to be a prostitute: children who are sold for the purposes of sex with adults are correctly referred to as “victims of child sex trafficking” or “victims of child sexual exploitation”, to reflect the fact that they are not given a choice in how their bodies are abused.

This is not merely pedantic. This terminology has been adopted by most organisations which come into contact with trafficked/sexually exploited children, as it helps inform the ways in which police and others respond to their plight.

We’ve found it surprising, to say the least, that Wedger persists in referring to “child prostitutes”, and calls one trafficker, the bizarrely named “Foxy”, a “pimp”.

Incidentally, Wedger claims that in 2004, he went to the Child Exploitation and Online Protection command (CEOP) of the National Crime Agency in his search for information to help him deal with the “child prostitution” ring he had uncovered. This is odd, since CEOP was not formed until 2006.

How many crowd-funders does one man need?

We started looking into Jon Wedger’s crowd-funding activities, and discovered that his only current rival in the “holy shit, how hard can you milk that story?” sweepstakes is our old friend HoaxGirl.

Just for starters, we have Wilfred Wong’s “Support4theFamily“, launched last year. It’s not possible to determine how much, if any, this campaign raised, as it’s by direct donation to a bank account.

Then there’s “Funding Morality”, run by the ultra-dodgy Jewish Institute for Global Awareness (JIFGA; www.JIFGA.org). This U.S.-based organisation was previously known as the JONAH Institute for Gender Affirmation, but changed its name after a series of lawsuits by clients who found their methods both abusive and ineffectual. The organisation is involved in “gay-conversion therapy” for men whose sexual orientation conflicts with their religious beliefs. An odd choice to fundraise for a former London cop, but who are we to say?

There’s the common-or-garden “JustGiving“, where Wedger raised £7,340 for his walk from London to Manchester via the canal system earlier this year;

And who could forget the “Jon Wedger Whistleblower Collection” of mugs and t-shirts emblazoned with his face?

We’re sure we’re missing a few, so if you happen to know of any more, do feel free to let us know in the comments.

Of course, there’s nothing wrong with raising funds—even for one’s self—if one is completely transparent about where the money will be going. However, using the canal walk as an example, what “expenses” were covered by the £7,340 raised, and how much went to charity? Which charity?

There are so many questions, and each time he opens his mouth on camera, Wedger manages to raise even more. Yet despite more and more people beginning to ask pointed questions, he steadfastly refuses to answer. Hardly the behaviour one would expect from a man who clearly believes himself to be a national hero.