In late August 2017, as we read through and wrote up the notes from our Faithful Correspondent at Rupert Quaintance’s trial, one thing in particular gave us cause to reflect on this blog’s role in putting an end to the Hampstead SRA hoax.

It became clear quite early on that Rupert’s main defence strategy would revolve around a single idea: that he was aiming his threats of violence not at the parents of children who’d attended Christ Church Primary School, but rather at the trolls and harassers who were terrorising him and making his life a living hell. (Okay, that was paraphrased somewhat, but you get the idea.)

As it turned out, this strategy didn’t work: the jury did not buy Rupert’s excuse, and he ended up receiving a nine-month prison sentence.

But during the trial, for a while at least, it looked as though Rupert’s argument might have gained some traction. The fact that the jury took two days to deliver its verdict, and that they were unable to come to a unanimous decision, tells us that at least some of Rupert’s barrister’s arguments rang true, for at least some of the jurors.

According to Liat Clark’s article in Wired.com,

Derogatory hashtags, the publishing of personal information – also known as “doxxing” – and inciting others to join a full-on harassment campaign are all offences listed in the document, published today. The latter, referred to by the CPS as “virtual mobbing”, can be prosecuted under the Serious Crime Act 2007.

While this is good news for the parents, teachers, social workers, police officers, clergy, and others who’ve been targetted for nearly three years by the Hoaxtead mob, it can also represent a double-edged sword. In a case like Rupert’s, a person accused of harassment could potentially play the “I was harassed too!” card, and quite literally get out of jail free.

In Rupert’s case, we were interested to note that despite his claims to have been “petrified” and in fear of his life, he did not actually produce any evidence of the alleged harassment he’d received. While we’re no legal experts, it would seem to us that if a person were going to use this as an effective defence, they ought to at least enter a few examples of said harassment into evidence, and this did not happen.

However, we spent some tense moments, trying to recall whether anyone on this blog had ever said anything to Rupert that might qualify as bullying, harassment, or cyber-stalking.

The problem, as we see it, is that it can be very difficult to walk the fine line between self-defence—letting a person know what the consequences of their actions could be, for example, or simply telling them to stop their offensive behaviour—and taking on the role of aggressor.

‘No death threats’ no longer enough

Since we started Hoaxtead Research in May 2015, we’ve had one cardinal rule: we do not make, nor do we condone, death threats.

From time to time, new readers who aren’t aware of this policy have left comments which edge too close to the line, and we’ve either corrected them or removed the comments altogether. We’re proud of this, but it’s becoming increasingly clear that while “no death threats” is a necessary ingredient, it is no longer anywhere near sufficient. To remain a powerful force for good on the internet, it’s increasingly important that we ensure that our behaviour is beyond reproach.

Funnily enough, we wrote about this issue in September 2016, following the spate of arrests that had just taken place:

Just as we don’t want to prejudice anyone’s right to a fair trial, nor do we want anything we say here to be taken by anyone—including any accused persons—as goading, gloating, or offering “implied consent” to engage in mutual slagging.

In other words, we don’t want to create a situation in which the accused could potentially use the defence argument that people from this blog are engaging in or initiating conversations about the case, and that any harassment they might have committed was only proportionate and in response to what they received.

(It’s almost as though we anticipated Rupert’s defence, no?)

As we said last year, we don’t want to do anything that could impede the free exchange of ideas amongst our readers. Our Comments section is arguably the most important part of this blog, and we love that our readers feel free to share ideas, insights, information, and humour with one another. We hope that never changes.

One of our great strengths is our ability to critique the actions of those in the Hoaxtead mob, and to offer critical thinking in place of the sheep-like beliefs of the conspiraloons.

We know we have no control over how our readers behave when they’re outside the bounds of this blog, and we cannot presume to tell anyone what to do. We hope, though, that those who use this blog as a discussion forum will carry that basic civility with them when they encounter Hoaxtead mobsters elsewhere on the internet.

As we know, there are charges currently pending for other Hoaxtead mobsters (including Sabine McNeill and Jake Clarke), and we want to be certain that we don’t give anyone on the other side even the slightest excuse to say, “Oh, I wasn’t aiming my harassment at the parents; it was directed toward the trolls!”

As disingenuous an argument as that might be, we want to ensure that we are squeaky clean. We want nothing we say or do to leave even the slightest room for doubt in the minds of those who make up the next jury.

After all, we’ve come too far to drop the ball now.

This article was originally posted on 7 September 2017. 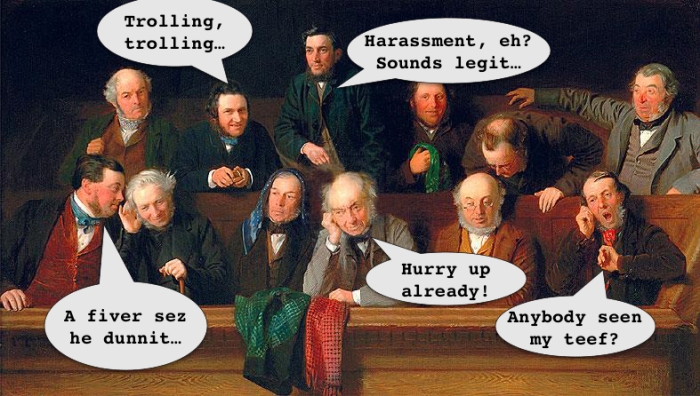 52 thoughts on “Why we won’t stoop to doxxing, harassment, & trolling”