A few days ago, one of our commenters mentioned a book which sounded very interesting: We Believe the Children—A Moral Panic in the 1980s, by Richard Beck.There are some startling similarities between the genesis of the “Satanic day care abuse” panic of the 1980s and the Hampstead SRA hoax.

Those of us old enough to remember the bad old days of that earlier “Satanic panic” will recall that while it seemed to have been kicked off by the supposedly true story detailed in the book Michelle Remembers, the primary locus of concern seemed to converge on child care centres. The McMartin Preschool case is by far the most famous, but Mr Beck describes cases most of us have never heard of:

In Niles, Michigan, the son of one preschool owner was sentenced to seventy-five years in prison. Children at the school said the man had photographed their abuse, made them take drugs, unearthed corpses, and sacrificed—not killed, but sacrificed—animals.

In Malden, Massachusetts, the owner of a day care center and her two adult children were accused of abusing forty students in a place called the “magic room.”

In Chicago, a janitor at a community child care facility was accused of boiling and eating a baby. Other staff members were charged with 246 counts of abuse and assault.

In New Jersey, children said their teacher had raped them with knives, forks, and wooden spoons, and a child in Miami told investigators about homemade pills their caretakers had forced them to eat. The pills, the children said, looked like candy corn, and they made all of the children sleepy.

Children in various cases said they had been taken to graveyards, sometimes to kill baby tigers and sometimes to dig up bodies, which were removed from their coffins and stabbed. In addition, the sex rings said to be operating in cities like Jordan, Minnesota, and Bakersfield, California, supposedly involved regular meetings, wild parties, elaborate religious ceremonies, and the production of child pornography, all witnessed by many people….

Despite the numbers of people said to be involved, despite all of the different implements the defendants were said to have used, and despite the brutality of the violence they were believed to have inflicted on the children they cared for….(n)o pornography, no blood, no semen, no weapons, no mutilated corpses, no sharks, and no satanic altars or robes were ever found.

Of course the significant difference between the events Mr Beck describes and the Hampstead SRA hoax is that in the daycare investigations, children were coerced into fabricating stories by investigators using very questionable interview techniques, sometimes on children as young as three or four:

Interviews could last for hours….When children failed to provide answers that corroborated allegations of abuse, interviewers repeated the questions. As these interviews pressed on, children who did not provide affirmative answers to questions about abuse found themselves being asked the same questions all over again. So the children began to provide different kinds of answers.

In hindsight it’s easy to see that hammering away at young children, and not accepting “there was no abuse” as an answer, could have pushed children to create stories to satisfy their interrogators. The big difference between this and Hoaxtead, though, is that Abraham Christie’s interrogations were backed up by serious physical abuse: kicks, punches, suffocation, burns, threats of being buried alive until the child “told the truth” and admitted to sexual abuse that had never actually occurred.

Mr Beck states that by the middle of the 1980s, defence lawyers had begun to seriously question the veracity of information obtained by the investigators in the daycare cases. Under scrutiny, it became clear that these interviews were producing false testimony, and destroying hundreds of lives in the process.

Fortunately for RD’s children, once they’d been taken into protective custody and knew they would not be returning home to further abuse, they felt confident enough to correct their earlier allegations to the police. However, the blind belief that the children “could not have made up” the grotesque stories they originally told in the videos and the first two police interviews still permeates a small but vocal group, who for reasons of their own would very much like Hoaxtead to have been real. 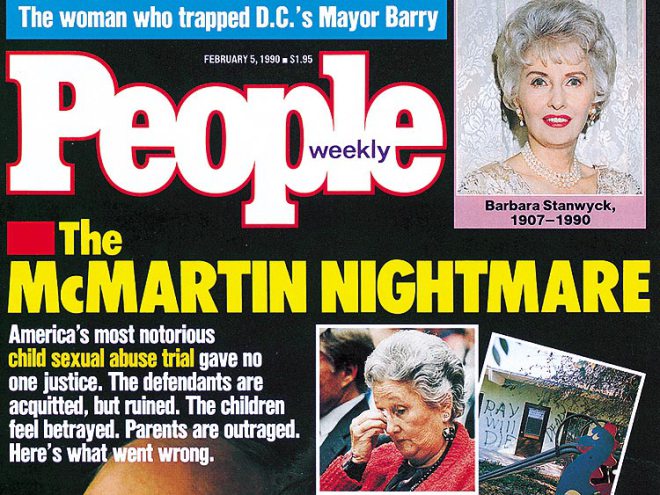