As we noted yesterday, Neelu Berry’s pre-trial and preparation hearing took place yesterday. While she did put up a Facebook video reporting on what happened, we’ve squinted and looked at it sideways, turned it upside down and shook it, tapped it several times, and still weren’t able to make much of it.

Here it is, in case you’re feeling lucky:

Here is what we were able to discern:

Neelu made it to the Crown Court at Snaresbrook at about 9:30 a.m. (Given some of her past performances, this counts as a small victory in itself.)

She and unspecified others “uncovered a lot of frauds”. Ooh, we can hardly wait.

The first was a “listing fraud”, as the Court was under the illusion that at her plea and case management hearing, Neelu would be entering a plea. Silly Court.

Neelu had already answered the tricky question of plea, you see, by claiming at her last hearing that it was a “no jurisdiction plea”. She helpfully explains that this is a “no plea”—”not a guilty, not a not guilty, it’s a nothing”.

On Planet Neelu, this means that the judge cannot sit, because there is corruption. “Until the state sorts its corruption out, it can’t sit in judgment of the people”.

Neelu further claims that although the judge was “given information” at 10:06 a.m., she’d already made a decision.

According to Neelu, the judge told the CPS barrister that he’d only loaded the Crown case, but hadn’t loaded Neelu’s case onto the court computer system. Neelu seems to think that this constituted a failing of the prosecution, but according to ‘Notorial Dissent’ on Quatloos, that’s not quite correct:

The CPS lodge their documents on Digital Case System. This normally works because barristers are registered on DCS. Evidence uploaded to DCS is classed as served. If you are representing yourself, then you don’t usually have access to DCS. It speaks more to Neelu’s failure to co-operate with the court system than a CPS failing. It is not down to CPS to sit by a printer and provide them. If paper copies were not available, she probably hasn’t spoken to the clerk since the last hearing.

(Thank you, Notorial Dissent, that actually made sense.)

Back to you, Neelu:

So they’ve been routinely doing this fraud which is, um, ‘electronic case half-sided story fraud’ on everybody to get a prosecution and the judges don’t get to see the other side of it.

Apparently Neelu believes that if the Court refuses a “No Jurisdiction” plea, then the defendant can ask for a trial to determine about the jurisdiction. The fact that this would ensure the courts were tangled up in a never-ending morass of pretend trials about nonsensical non-existent legal terms doesn’t seem to have occurred to her.

Now watch, as Neelu plays the old “Court of Appeal” card to get out of this trial:

Yes, we’ll just bet she does.

So when the court clerk came out at 10:06, she said this case was meant to be before the Resident Judge. He got called to the Court of Appeal and we’ve got to adjourn it. If we didn’t kick up a fuss, they would have turned a no-jurisdiction trial into another plea and trial Preparation. …

…[B]ut yeah, so we adjourned to another date on the 24th of July when Mr Attenborough is available. So I was in the Snaresbrook Crown Court this morning; it’s been adjourned to the 24th July 2018 before the Resident Judge.

Whoa. Talk about a buried lede—she couldn’t have just come out and said that at the start? 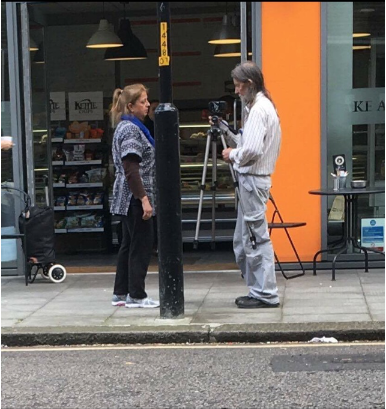 Neelu and friend demonstrate how to use a tripod

56 thoughts on “Neelu’s day in court, translated (sort of)”