Neelu Berry announced yesterday that she will be facing six charges of benefits fraud at Snaresbrook Crown Court this morning.

Okay, she didn’t actually say that.

So far as we can tell, the six charges, dating back to April 2010, are laid out in this letter which Neelu published back in April on her Facebook page: 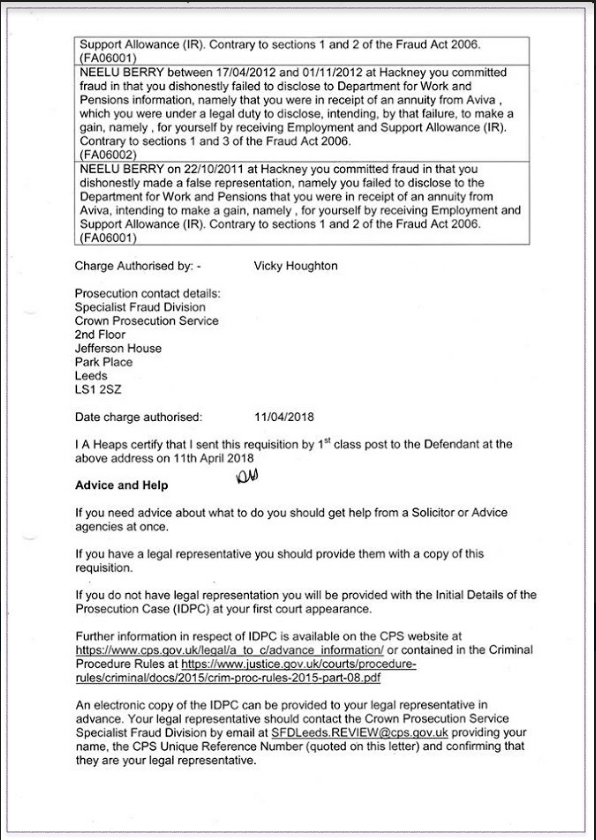 The first hearing for this case took place on 20 April at Redbridge Magistrates Court, and it proved to be approximately as circus-like as you might expect.

In around 9 hours, at 10 am on 20th April 2018, I will be attending the Redbridge Magistrates Court to witness yet another false prosecution against me. Apparently, when I took out a Private Pension 33 years ago, and it was sold to me on the basis that it would be in addition to my State Benefits or State Pension, and even though it is less than the £20 per week which the law says I do not need to disclose, I am being prosecuted for not disclosing it.

So apparently, they stopped my benefits for 17 months just because they believe I should have disclosed it, even if it does not change my benefit, they have decided to steal it from my benefit.

So even though the law says I must have £73 per week to live on, they are giving me £58 per week.

So the State is still running counterfeit currency, which has no value except when our blood, flesh, sweat and tears is mixed with it and it causes our enslavement – so if I do not attend, the Police will break my door again and put me through the third false prosecution in 3 years.

And following the hearing, she noted that “equity lawyer” Edward William Ellis had been present as a witness for her “No Jurisdiction Plea”:

Court 1 we sat in the public gallery at the back of the courtroom with a bench of 3 magistrates – I gave my name to Usher and gave name of Equity Lawyer, Edward William Ellis as a Witness for the “No Jurisdiction Plea” the middle magistrate gave instructions that as I was unrepresented, copies of the documents must be printed and I must be referred to the Duty Solicitor.

I stood up and objected on grounds of the “No Jurisdiction Plea” no documents were needed nor the duty solicitor.

That, as it turned out, did not go over well with the Court.

Judge Lucie asking “Who are the 2 people making notes at the back of the court?” asking if court 3 is open. They told us to wait outside. We were called back in around 11.20am.

This was not Neelu’s first attempt at defying the Court’s request that she stand in the dock.

In February 2016, the Ham&High reported, “Berry waved a piece of paper at the judge and shouted that her case had been dismissed and that she did not have to go in the dock”. It didn’t work then, either.

He asked again my name, I responded “I hereby make a “No Jurisdiction Plea” – I told the judge “Judge Lucie, you have a conflict disqualification because I have been before you, before” [in the false prosecution against my sister and her husband when he threatened to lock me in a cell 6 years ago].

The Prosecutor told the judge there was a sum of 5000 GBP involved and asked for it to go to the Crown Court. The judge asked if we wished to proceed in the Magistrates or go to Snaresbrook Crown Court.

The Judges Clerk told me I would be required to plead “Guilty” or “Not Guilty”. I told her that it would be neither because there are a lot of disclosures to be made. I told the judge there would be a “No Jurisdiction Pea (sic) and asked for his Public Liability details. He asked me to choose to proceed or transfer to Crown Court. I chose to transfer to Crown Court. There is enough evidence of Committal Frauds to appeal the proceedings.

What to expect at today’s hearing

We fully anticipate more claims of “Committal Fraud” and “Non Jurisdiction Pleas”, with possibly a tussle or two regarding whether Neelu must stand in the dock. If she brings Mr Ellis with her, things could get even more creative, with allegations of attempted murder, assault causing actual bodily harm, and state terrorism.

We’re sure we’ll hear all about it, for better or worse. Larry, Curly, and Moe, eat your hearts out.

63 thoughts on “Neelu to face charges of benefits fraud today”