If you knew of two children who you believed had been terribly abused and had then disappeared from public view, but who unexpectedly reappeared a few years later, clearly healthy, smiling, and proud, how would you respond?

Most normal people would be relieved, delighted, happy, not only because the children had obviously survived their difficult past, but because they were now thriving and running a successful business.

However, that’s not how Wesley Hall sees it. Apparently the news that RD’s children are happy and enjoying life has upset him tremendously.

Yesterday, in response to the news that RD and his children are safe, well, and working together in a family business making “slime”, Wesley’s response was, “I feel sick…” 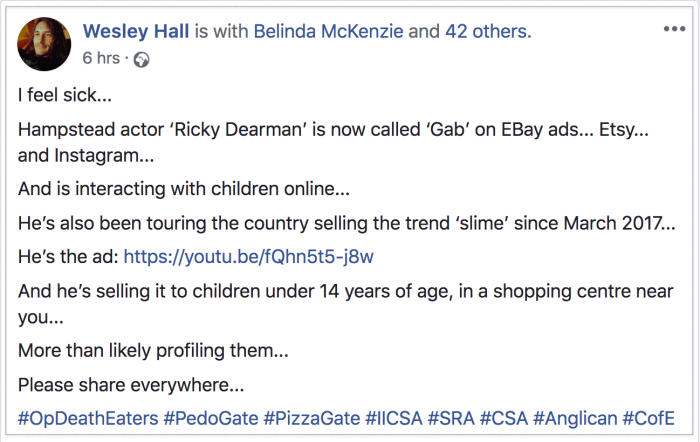 Wesley, who fled to Spain a few weeks ago to avoid pending charges of perverting the course of justice, now appears to believe that he can say what he wishes about the Hampstead case, without fear of legal repercussions.

Over the past few months, we’ve heard unconfirmed rumblings that Ella dumped Abe last year when she realised he was no longer of use to her. This might have occurred during the wake of our asking the “awkward question” about the alleged cult tattoos, which clearly stumped the greasy homunculus and left him speechless for several weeks, until he stammered out a patently silly answer.

Since then nothing has been heard of Abe; given what Wesley told a few friends in Manchester, it seems he might be applying for Abe’s old job.

Wesley certainly seems determined to spread his “sickness” about the internet: in addition to sharing the post on his personal Facebook page to 43 fellow conspiraloons, he simultaneously placed it on at least three other Facebook pages, one of which he claims not to run!

Wesley laughed off the suggestion that he runs the “Free Sabine” Facebook page. How fascinating, then, to check the timestamp on that page… 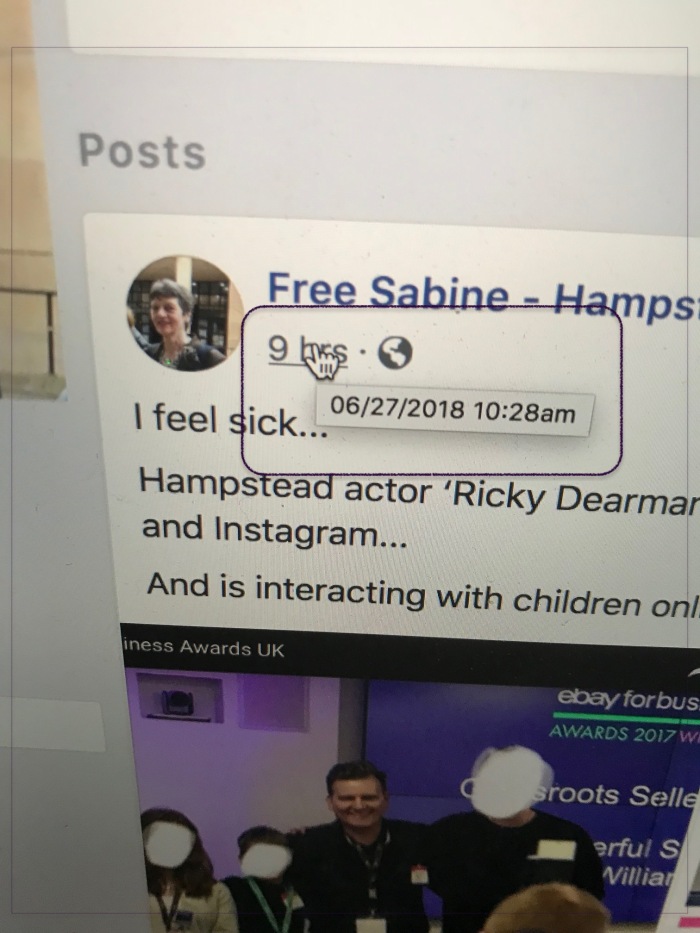 …and then to compare it with the timestamp with the identical post on Wesley’s personal Facebook page: 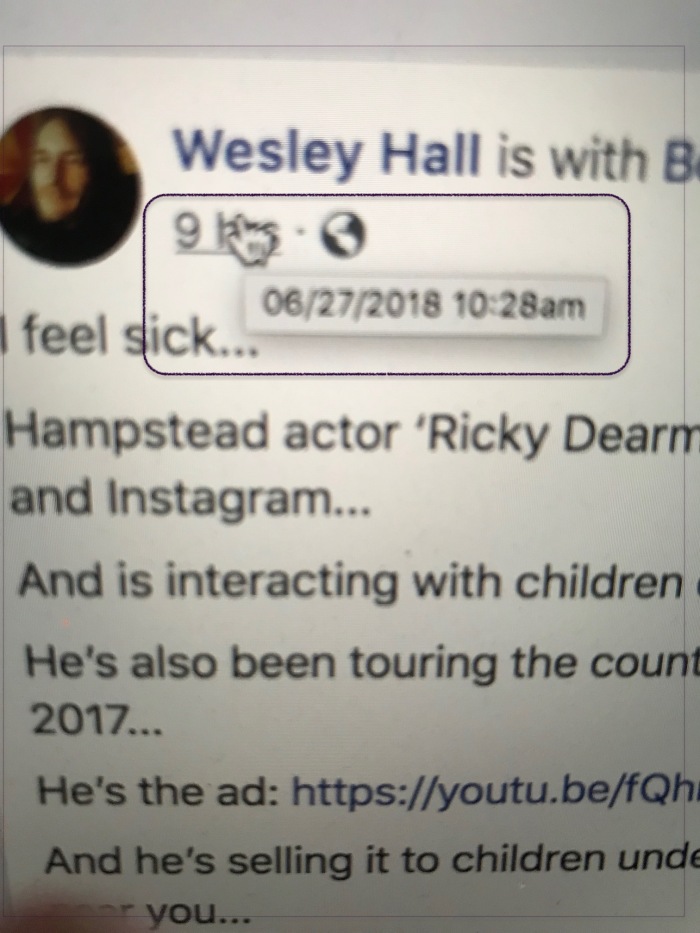 And funnily enough, within seconds, another identical post popped up on the “Ubuntu Planet UK” Facebook page (8,827 followers), which we suppose Wesley doesn’t run either: 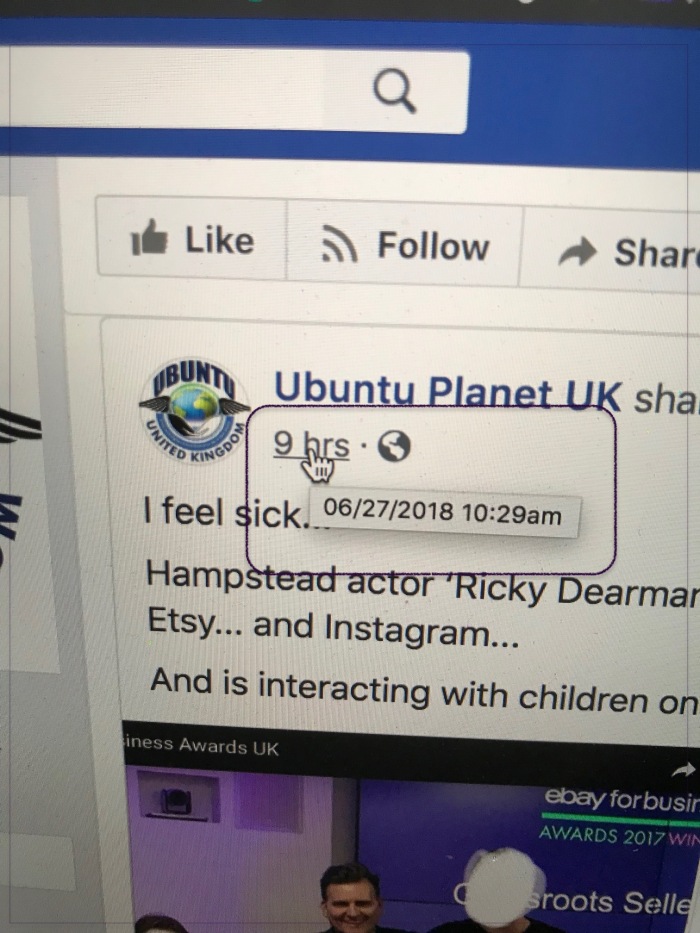 As Wesley and his troofer friends are wont to say, “There are no coincidences!”

Only one Facebook post did not quite fit the pattern: a page called “Manchester Angels”, with 29,000 followers, apparently “felt sick” exactly five hours earlier: 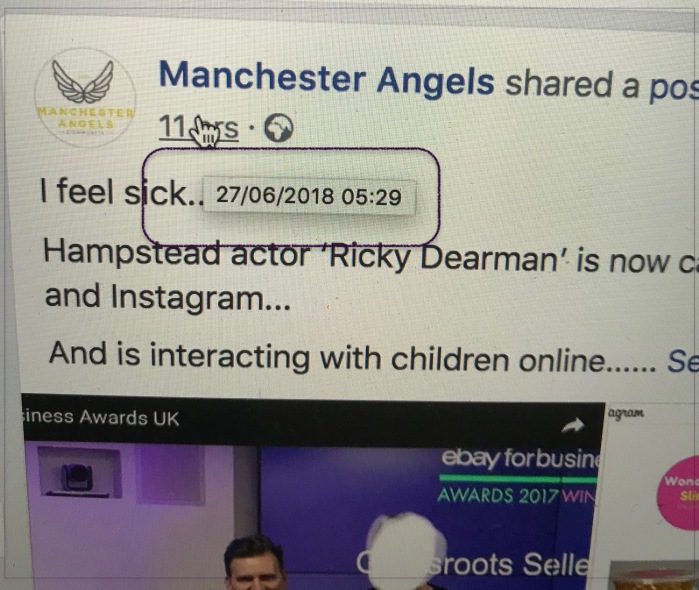 Apparently the sickness spread even further: at 05:29, the same post was shared to: Noncewatch–Burnley and Pendle; PirateSec; The Voice of Treason; Theresa Mayhem; and Opdeatheaters. There may well be others we haven’t found yet.

How to explain this strangely timed cascading series of identical posts?

Our social media boffins inform us that there are a number of ways to do it, but the easiest is to use an applet such as “IFTTT” (If This, Then That). If the user does one action, the applet will automatically do another—so, for example, one post could be sent to three Twitter accounts at 2:29 a.m., then mirrored on one Facebook account five hours later, and on three others five hours after that. The idea is to catch as many readers in different time slots as possible.

In any case, it seems Wesley wanted to let the maximum possible number of people know that his tummy was upset because RD’s children are safe, well, and happy. 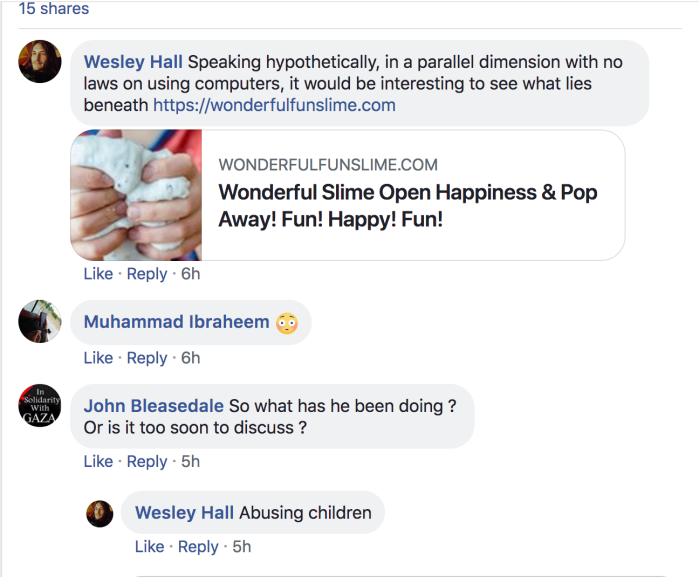 And even though he was feeling unwell, he took a few moments to reiterate Angela Power-Disney’s disgusting suggestion that someone illegally hack the children’s business website.

While he was at it, he threw in another completely unsubstantiated bit of harassment, accusing RD of “abusing children”. We hope that if he plans to come back to the UK, he’ll be prepared to defend his behaviour in court.

Clearly his dyspepsia was getting the better of him. We hope it clears up soon, but we fear that prolonged exposure to Ella Gareeva may only exacerbate his difficulties. 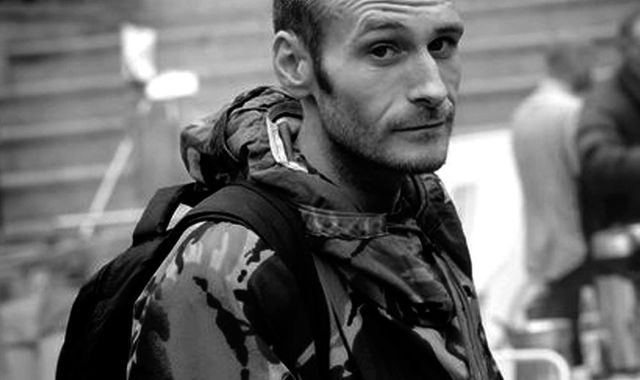