Last time we heard from Wesley Hall, he was broadcasting from the back of a police van, en route to be questioned by the Metropolitan Police. He’d been apprehended on his way out of the UK, bound for Spain with a load of camera equipment, and claiming he’d been hired to “do a job” in a town near Málaga…coincidentally, the region where we suspect Abe and Ella are currently holed up.

We ought to have guessed that Wesley was unable to stand the heat, and has vacated the kitchen. According to this curious exchange, he’s back in Spain, where his latest plan is to make the bottom drop out of the hemp and CBD market.

That’s right, you heard us:

A word of explanation here: Paul Haydon is a Manchester ex-pat who currently lives in Spain, where we understand he runs the Dark City Compassion Club.

It seems that Wesley gave Paul a call, and when Paul didn’t agree with Wesley about the Hampstead SRA hoax, Wesley went off the deep end. Of course, that’s not how Wesley played it:

(Side note: can anyone explain to us why Wesley feels compelled to insert demonic bad-guy laughs in his posts?)

Here’s Wesley trying to sound all knowledgeable and shit: 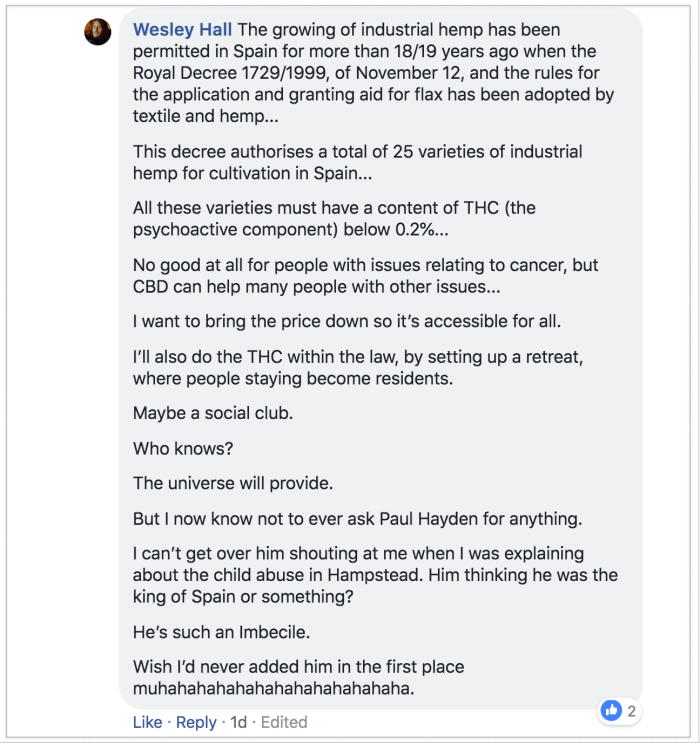 BTW, please remind us that if we are ever in need of a retreat, we should steer clear of Wesley’s. We’re not overly fond of his plan to turn casual visitors into permanent “residents”—sounds like something out of a Stephen King novel.

“They came for the cannabis….little did they know they’d be there for LIFE...” (Cue scary music and Wesley’s bizarre “muhahahahahahahaha”).

Now, how surprised would you be to discover that Paul’s version of the story was just a bit different?

“The man that got whiplash from the wind”…LOL—looks like Paul’s got Wesley’s number!

It seems that the Dark City helpline is not just staffed by one person, and so on his third try Wesley wound up talking to Paul Cotton, aka Big Paul, in Manchester. Wesley told Big Paul that he and Paul Haydon were long-time mates; however, Paul H. wasn’t so sure this was true.

Wesley demanded to know what Dark City was going to do about Paul H., and at this point Paul H., who’d been on the line all along, said, “We will post the calls to the internet”. And that, according to Paul H., is when the death threats started.

Interesting: Wesley says he’s been in Spain for six weeks, which confirms a suspicion we’ve had—he’s usually a great deal more chatty than he has been lately, and we wondered what was up. He also revealed that he’s a five-hour’s train ride from Barcelona (well, he said two hours, but Paul set him straight). We reckon this puts Wesley closer to Valencia than to Màlaga, but that’s just a guess.

Apparently Wesley is claiming that he’s being hunted by a paedophile ring, and that he’s been working on the Hampstead hoax for nine years. We find this astonishing, given that the thing only started three and a half years ago, but perhaps he was involved during the planning stages, who knows?

One of Paul’s friends, who says that they were threatened by Wesley, chimed in here, noting that Wesley is noted for threatening people:

Good to know that Wesley’s reputation preceded him to Spain. Somehow it’s comforting to know that he will have company while he’s so far from home. But we do wonder how Abe will feel, having Wesley as a direct competitor? This ought to be good….