We’ve said this before, but the web of  those who push the Satanic ritual abuse narrative within the UK is both relatively small and very close-knit.

For example, when we were looking into the story of SRA claimant Becki Percy, we learned that although she began her career of allegations by claiming that her father had sexually abused her, and later expanded that to her mother trafficking her, she didn’t really get rolling with her abuse claims until she’d discovered a woman named Victoria (Vicky) Ash.

Off to a good start

Becki contacted blogger Fenna Vlekke in early 2015, “because she wanted to raise awareness on the topic of childhood sexual abuse”. In the interview she not only claimed that she was locked into the loft at her parents’ home with “only a dog bowl filled with water for company”, but she described what happened after she allegedly told a teacher in January 2010 that her father had been sexually abusing her:

That night, a police woman and a social worker came to mums house. My dad was still at work so it was only my mum and me. They explained everything to her and she started with the crocodile tears. She pretended she had no clue this had been happening. Of course, they believed her tears. My dad came home and, for my own safety, the police woman told me to go upstairs so I did. I could still hear everything. She told my dad he would have to find somewhere else to live because he wasn’t allowed near me. He was angry. Saying that I’d made it up and that he hasn’t ever touched me. Lies. Thankfully the police made him go and he did. He left.

So…a 13-year-old girl reports sexual abuse, the police show up, and instead of arresting her father for questioning, they simply tell him he has to leave the home…and then they toodle off themselves, job done?

In this interview, Becki says she went to live with her uncle, but worse luck, guess what? He was involved in her parents’ child trafficking ring too! When she reported this in March 2010, she was sent to live in foster care, followed quickly by emergency residential care, and finally “a lovely placement” where she was living at the time of the interview.

There’s no mention of her uncle or parents ever having been arrested or prosecuted for their alleged crimes; they just fade out of the picture.

Asked whether she had help dealing with the emotional effects of her abuse, Becki’s response is telling:

In terms of social services, they don’t believe a word that comes out of my mouth. They think I’ve lied about the abuse. I’ve been referred to CAMHS countless times but they’re totally useless.

Interestingly, in a December 2016 YouTube video, the story changes somewhat:

I lived with Xxxx ([mother’s] brother) until May 7th. I disclosed to the same school teacher about him sexually abusing me. I was placed in foster care

I was in that foster care placement for around a month in which time the male foster carer was sexually abusing me. I, again, disclosed to a school teacher and was placed into an emergency children’s home

I was there for a further month then placed in a more permanent children’s home.

From July 2nd 2010 to April 21st 2015 I live in the second children’s home. In that time I went through a cycle of CPS wanting me to see Ann, I would have contact with her then she would abuse and traffick me, I would eventually tell someone. The police would ‘investigate’ but then come back and say they wasn’t going to prosecute which is when the cycle would start over.

A few things are notable here:

And then along came Vicky Ash

In January 2017, however, Becki posted this video to YouTube:

We’ve discussed this video before: it’s the one in which she states, then tries to retract, that she has done a great deal of research into SRA. The main thrust of the video is that while she knew she’d been abused as a child, it wasn’t until about six months earlier that she’d come to the stunning realisation that she had been a victim of SRA.

At 05:52 she mentions that her role model in this is “a very courageous woman named Vicky Ash”. Becki expresses admiration for Vicky:

I really find her story and her courage inspiring and she was the push that I needed spiritually—she’s a Christian—to continue doing these videos….To hear from another survivor that has experienced similar things to myself speak about it with such…she was so graceful about it, and she was calm. She looked like she was at peace. And I’m thanking God that she has found God, and she is strong in her faith, and I know that God has already started healing her, which I’m thankful for also.

Unfortunately, the video Becki refers to has been removed from YouTube for violating its terms of service.

On Voat, Becki gushes about how Vicky helped her understand that the alleged abuse she’d suffered was actually SRA. 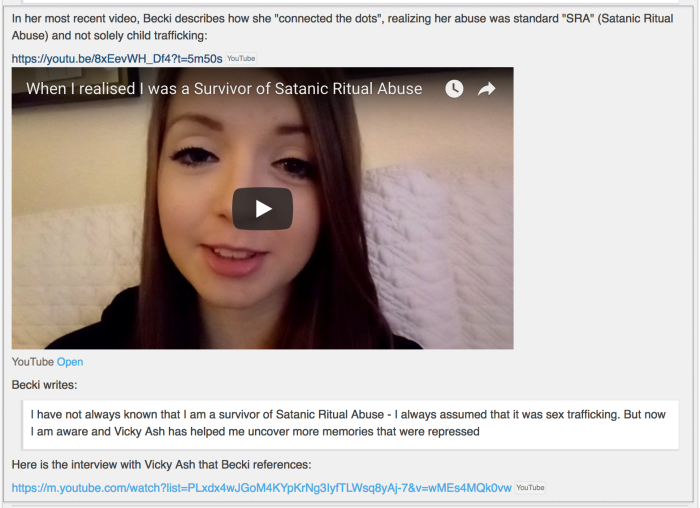 We don’t know that Becki and Vicky ever communicated directly. However, it seems quite clear that Vicky’s various online interviews helped Becki shape and hone her SRA story, as it shifted from “my parents abused me” to “my parents trafficked me and locked me in the loft with a dog bowl of water” to “my parents and other unnamed people chased me through the forest full of dead children hung from the trees like Christmas ornaments, and each time they raped me they took another item of my clothing”.

Who is Vicky Ash?

Although the specific video Becki references is no longer available, Vicky Ash has given many interviews over the years. In this undated interview with Wilfred Wong, she describes the familiar litany of “Satanic” practices:

I was also forced by my Satanist abuser to watch pornography, which included Bestiality. In addition I was forced to ‘play games‘ during which I was sexually abused and told that I was the ‘star of the show‘. Photographs were taken of this abuse.

I was drugged with a drink and taken out at night to tunnels and other locations with everyone wearing black hooded cloaks. I heard screaming and witnessed Satanist rituals with animals and children being murdered. There was lots of chanting. I was impregnated and my baby was aborted and offered as a sacrifice to Satan. Abortion is the modern form of Child Sacrifice. Bible-believing Christians ought to take careful note of this and become much more actively Pro-Life.

(Yes, she does say, “Abortion is the modern form of Child Sacrifice”. You were not imagining it. Sorry.)

With the help of her MP Geoffrey Dickens, Vicky’s case was investigated by police twice, but no one was ever charged, despite her persistence. However, she claims “there is plenty of hard evidence that SRA exists in the UK, including the several successfully prosecuted SRA cases in our nation”.

This is blatantly false: in Prof Jean La Fontaine’s 1994 study of over 200 allegations of SRA in the UK, only three cases were substantiated, and they were found to have been “pseudosatanic”—sexual abuse was the main motivation of the abusers, and the ritual elements were incidental.

However, like most SRA pushers, Vicky does not let mere facts stand in the way of her belief.

A former beauty salon operator who now describes herself as a “beauty therapist”, she runs a “Holistic Christian Ministry called ‘Christoria’. Its work includes helping other SRA survivors and warning people that some beauty treatments on offer are Occultic”.

In addition to Wilfred Wong, Vicky Ash is closely linked to others within the UK SRA-pushing community.

In November 2015, we find her being interviewed by Brian Gerrish, an interview which was promoted on David Icke’s website.

Interestingly, in addition to referencing Geoffrey Dickens, she talks about her affiliation with Dianne Core of Childwatch. Ms Core was an enthusiastic promoter of the SRA narrative in the 1990s, who managed to straddle the fundamentalist/evangelical Christian / radical feminist divide, and worked on The Cook Report at the time when it was pushing SRA heavily. She is probably worthy of a post on her own, but it’s interesting that Vicky Ash says she was helped by her.

We found that Sabine McNeill has featured Vicky on her National Inquiry into Organised, Orchestrated, and Historic Child Sexual Abuse blog. In a post on 8 May 2017, Sabine featured Vicky speaking at the “Perth Conference on Full Spectrum #ChildSexualAbuse”.

That event, described by our own YdychyncachuTracey as “a shitfest of complete utter fuckwittery”, turns out to have been the founding event of none other than the Scottish Fresh Start Foundation, which we’ve been tracking for the past several months. In addition to Vicky Ash, speakers included the aforementioned Wilfred Wong, Robert Green, Sandy Smith, Shirley P. Cooper, and Andrea Sadegh, with Brian Gerrish, David Icke, and Kevin Annett making video appearances. Hail, hail, the gang’s all here!

Once again, we have no idea what Vicky actually said at the event, as that particular Fresh Start Foundation YouTube channel seems to have taken down for “multiple infractions” of YouTube’s terms of service. Quelle surprise.

We find it fascinating, though, that despite being located so far from the UK, an SRA claimant like Becki Percy, looking for validation of her own stories, somehow seems to have hooked into the UK SRA-believers’ community so seamlessly. 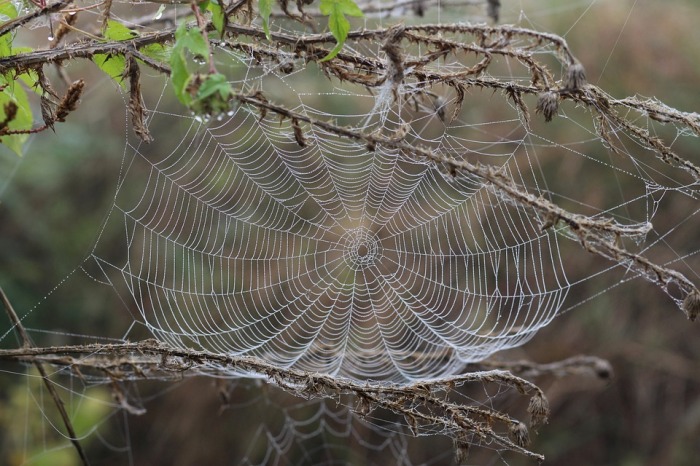