Belinda has been doing a lot of gloating and gleeful rubbing of hands over the past couple of weeks, and we suspect we might know why.

About a week and a half ago, she began making references to a “very secret conclave” she’d attended: 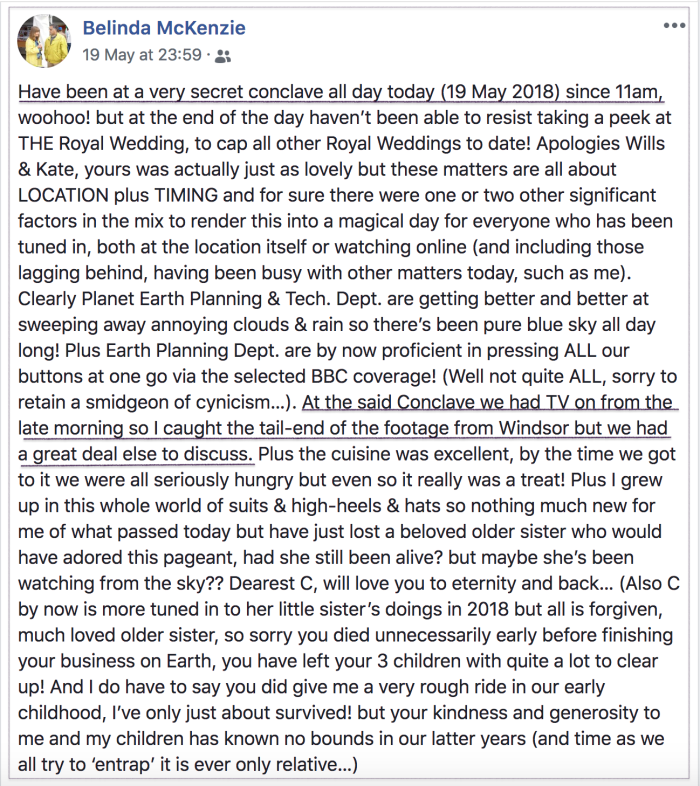 Have been at a very secret conclave all day today (19 May 2018) since 11am, woohoo! ….At the said Conclave we had TV on from the late morning so I caught the tail-end of the footage from Windsor but we had a great deal else to discuss.

The references to the royal wedding and her deceased sister seem a bit odd in this context, but clearly Belinda was feeling quite jolly—always a sign that she’s cooking up some sort of plot. We decided to watch and wait.

On Monday, she dropped another subtle hint: 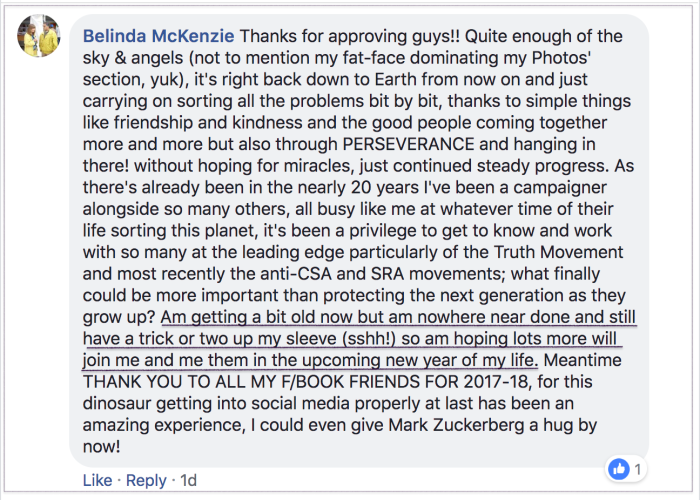 Am getting a bit old now but am nowhere near done and still have a trick or two up my sleeve (sshh!) so am hoping lots more will join me and me them in the upcoming new year of my life.

Of course it’s possible that in her dotage Belinda has decided to learn how to do conjuring tricks for the entertainment of her grandchildren. But the reference to “something up her sleeve” sounded more like confirmation of her earlier post: Belinda is almost certainly hatching some sort of plan.

Sadly for Belinda, we suspect we have some idea what she and her fellow “secret conclave” members have in mind. In fact, one of her minions, Lee Cant, emailed us last week to tell us:

We’ve tried to remove any personal information about recipients of this email, excluding publicly available media and police (!).

yes we are ORG. a JURY of 24 folk to do retrial on the Hampstead Children in a Common Law Court of record so the Public can see and be able to judge

To be fair, Lee probably didn’t send us this fascinating announcement intentionally. It was meant to answer a question from Andy Devine, in a seemingly interminable email thread begun by John ‘The Schnozz’ Paterson. Lee probably just forgot to check who was on the recipients list when he hit “reply all”.

ps do you still not think there should be a retrial on the Hampstead Children in a Common Law Court of record so the Public can see and be able to judge for them selves (sic), do you still think it irrelevant the people accused of having Tattoo’s-Birthmarks-Piercings-scares (sic) by the children in places the children should not have known? I for one would like that accusation proven wrong then I might think like you, however the fact that simple process wasn’t done leads me to believe this needs a retrial, so why “DONT” (sic) You????

Let’s leave aside for the moment the fact that there was no “trial” on this case, as no one was ever charged following the police investigation—though in our opinion Ella and Abe should have been charged, if not with child abuse, then at least with attempting to pervert the course of justice.

Fortunately for Ella, Abe, and Sabine, the court hearing was not in a Crown court, but in the family division of the High Court; and it was a fact-finding hearing, not a criminal trial.

Andy and Lee are dredging up the ludicrous issue of the tattoos yet again, failing to recognise that that particular horse has been deceased for the past three years, and that there is absolutely no point in continuing to flog it.

So how will a “jury in a Common Law Court of record” solve anything? And why will said jury consist of 24 people rather than the usual 12?

According to a site called Freeman Legal Services,

The Grand Jury of Peers is the most potent and lawful force which mas (sic) can assemble to hear wrongdoing. There is NO legal fiction, persona, corporation or entity which can withstand its judgment and is composed of “men and women” not legal fictions, and requires no authority from any external source. It trumps the Supreme Courts of England and the USA and the ICJ and any other fiction court which sits is finery on this planet.It’s yours, it’s here now and you are going to love it because you will understand it. The Grand Jury has the power and authority and precedence to judge facts as well as law – AS ALL JURIES HAVE. It is a deliberate falsehood to purvey that they can only decide fact!

Note to Lee, Andy, and Belinda: no amount of Freeman on the Land woo can make such a court “lawful”.

Holding any sort of public pretend court to “prove” that the Hampstead SRA hoax was somehow real is against the law, for the simple reason that victims and complainants in cases involving sex offence victims are automatically given lifelong anonymity under UK law. If their names or images are dragged out in public yet again, this will constitute contempt of court (the real court, not the pretend one). And we all know what recently happened to Tommy Robinson. ‘Nuff said?

As for the issue of the tattoos, aside from the fact that it would have been illegal for the police to demand that people reveal any distinguishing marks without their having been charged with a crime, it sounds very much like Lee and friends are contemplating some form of vigilantism.

Are they planning to somehow force the people of Hampstead to demonstrate their lack of tattoos, etc.? If so, we’re afraid they can look forward to being charged with assault, at the very least.

If all of this is the subject of the “very secret conclave” which Belinda attended on 19 May, it sounds an awful lot like a group of people might be conspiring to commit a number of crimes.

Whether it involves assaulting the innocent people of Hampstead, or illegally publicising the names of RD’s and other people’s children, any “public Common Law Court of record” would be very much against the (real) law.

Just to be on the safe side, we’ve informed the police of our suspicions. You’re welcome. 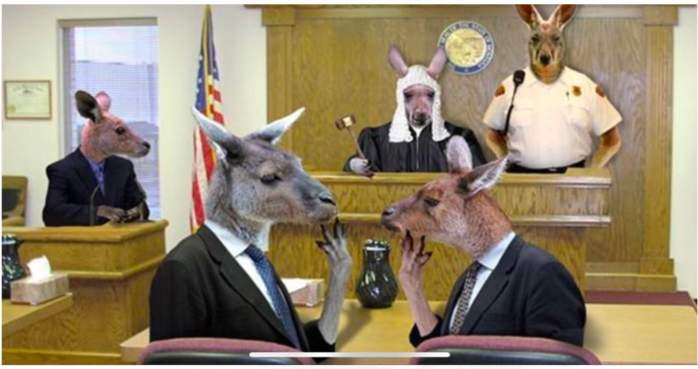 133 thoughts on “Is Belinda planning a kangaroo court?”