This is a difficult post for us to write. As some of our readers might know, Tim McKenzie of the “McKenzies Devils” YouTube channel (and variations thereof), died earlier this month, after a short illness.

None of us ever met Tim, or even spoke to him in person, but he was a stalwart supporter of this blog, and we’re all very sad to know that he’s no longer with us. We had always assumed that Tim was a lone wolf, but it turns out that he worked with a small team, who have inherited his mantle and intend to carry on his work. We’re happy to know they’re there.

How we found out

We became aware of Tim’s death thanks to this kind and thoughtful note from Naima Dawn Feagin, aka Hope Moore, aka Hope Morris, aka Hope Girl:

At first we thought it was a cruel joke.

However, when we made further enquiries with the remaining people from the MKD team, they assured us that it was, sadly, true. They said Tim’s family would prefer that we not make any announcement of his death, a request we respected. (They later agreed that in light of HoaxGirl’s various attacks, we could write this blog; we thank them for that.)

Such a charming Christian lady, falsely claiming that “MKD was struck dead hours after trolling” her.

On the contrary, we have learned that Tim had been ill for about three months prior to his sudden death on 7 May, and that he had not been well enough to go online during that time.

HoaxGirl repeated the lie on YouTube for MKD’s friends and family to find…if they were quick. Sure enough, the comment lasted about half a minute before she pulled it down, but one of our intrepid readers caught it before that happened: 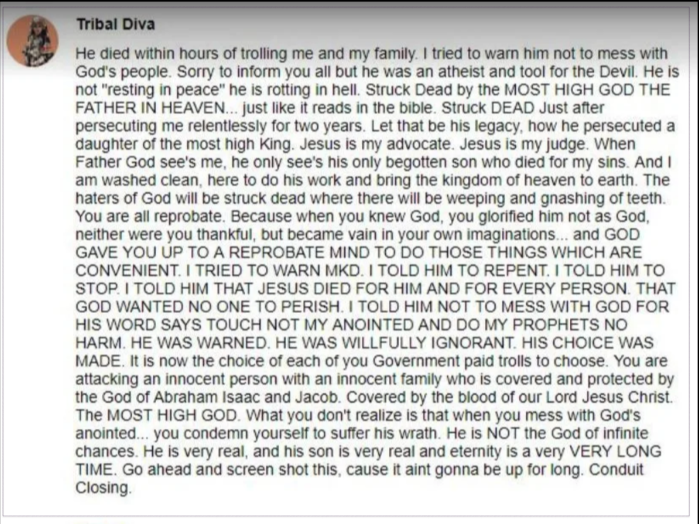 Again: Tim absolutely did not “die within hours of trolling” HoaxGirl and her family. That is a cruel and vicious lie. As for her assertions that Tim is not resting in peace, or the rest of her pseudo-religious twaddle, we’ll simply say that apparently she not only missed the concepts of resurrection and forgiveness of sins, but she utterly fails to grasp the entire fucking point of the New Testament.

HoaxGirl didn’t leave it at that, however. Apparently concerned that her words had not caused sufficient distress, she wrote this:

Not content with sending veiled threats in amongst her epic whinging, she followed up with an outright shot across the bow:

HoaxGirl, who has been hawking a verifiably fake “Quantum Energy Generator” for years, now supplemented by magical kryptonite thingies which are meant to repel evil death rays (or something, we forget), actually thinks that this blog can be intimidated into closing down for pointing out that the QEG Emperor is, as they say in the U.S. of A., “buck nekkid”.

And to ensure that we’ll have no recourse to inconvenient defenses such as the truth, HoaxGirl has been busily running around the internet, pulling down any of her own sites which might incriminate her.

Now of course, HoaxGirl denies all responsibility for that blog, but somehow she was able to exert enough influence on its creators to have it pulled down—just at the time when we might want to use it as evidence of her trolling. Goodness, that’s an amazing coincidence, that is.

Good thing we kept an archived copy of that blog, along with screenshots! Hurrah for our office pack-rats, who diligently screenshot and archive all sorts of things which could come in handy later.

And the same goes for several blog posts which HoaxGirl hastily pulled down yesterday: for example, the one about Wilhelmina, the elderly lady from the west coast of Canada who HoaxGirl and her charming mother almost bilked out of $120,000. Fortunately for Wilhelmina, her banker smelt a rat and refused to allow her to fork over the dough.

Then there’s the story of how HoaxGirl went to hang out with some super-rich people (whose lifestyle she totally dissed, btw) in hopes of getting them to “invest” in the magic energy machine?

Now, all this could have been really damaging to HoaxGirl’s legal case against us, had it been allowed to remain online.

So gosh, HoaxGirl, it’s really too bad we already have copies tucked neatly away in folders, isn’t it? This is the sort of thing which makes us grateful for our resident pack-rat team, we can tell you!

And that’s really just the tip of the iceberg.

Team Pack-rat has been diligently archiving all sorts of fascinating material demonstrating the truth of our allegation: that HoaxGirl is knowingly marketing a device (well, devices now, if you count the magic orgone sparkly triangle thingies) which she is aware cannot ever work; and that she has systematically (and one might almost say “with aforethought”, if one wished to sound like Perry Mason) attempted to suppress any and all who could conceivably reveal the truth about her activities. Because, you know, profit margins.

So go ahead, HoaxGirl. Bring it on.

But before you do, you might wish to keep a couple of things in mind: if a statement is true, it does not qualify as defamation under the law. And the courts tend to frown upon people who deliberately attempt to suppress evidence against them. That’s actually a bit of a no-no, and could win you some jail time. So do look before you leap, won’t you?

We’ll close with this video from some of Tim McKenzie’s friends. Farewell, Tim, we’re all going to miss you.

168 thoughts on “In memoriam; and HoaxGirl shows her true colours”