It is easy to bunk, but hard to debunk. Anyone who starts bunking will soon fall in with those who deal in claptrap, hokum and plain lies. Between them there may be jealousies, but at bottom there is a fellowship, and the debunker faces a league formed against him. The debunker, on the other hand, finds himself alone, for exposing sham is a lonely business because it has no profit motive.

Libertarian monetary theorist E.C. Riegel wrote those words in 1928, and they ring true today: it’s much easier to “bunk”—to engage in peddling absurd, ridiculous nonsense to a gullible audience—than it is to “debunk”, that is, to expose those untruths.

Mr Riegel correctly identifies part of the problem: those who peddle bunk tend to ally with one another, however temporarily, to sell their lies to anyone who’s buying. And so one sees alliances such as that between Catriona Selvester (aka Cat Scot), Robert Matheson (aka Fabooka da Stait), and Naima Dawn Feagin (aka Hope Girl), each of whom is selling a different form of bunk.

The alliance, of course, is based upon their mutual hatred of this blog.

Here we see “Tribal Diva” (another of HoaxGirl’s aliases) claiming some great victory because she managed to have Sheva Burton’s YouTube channel removed: 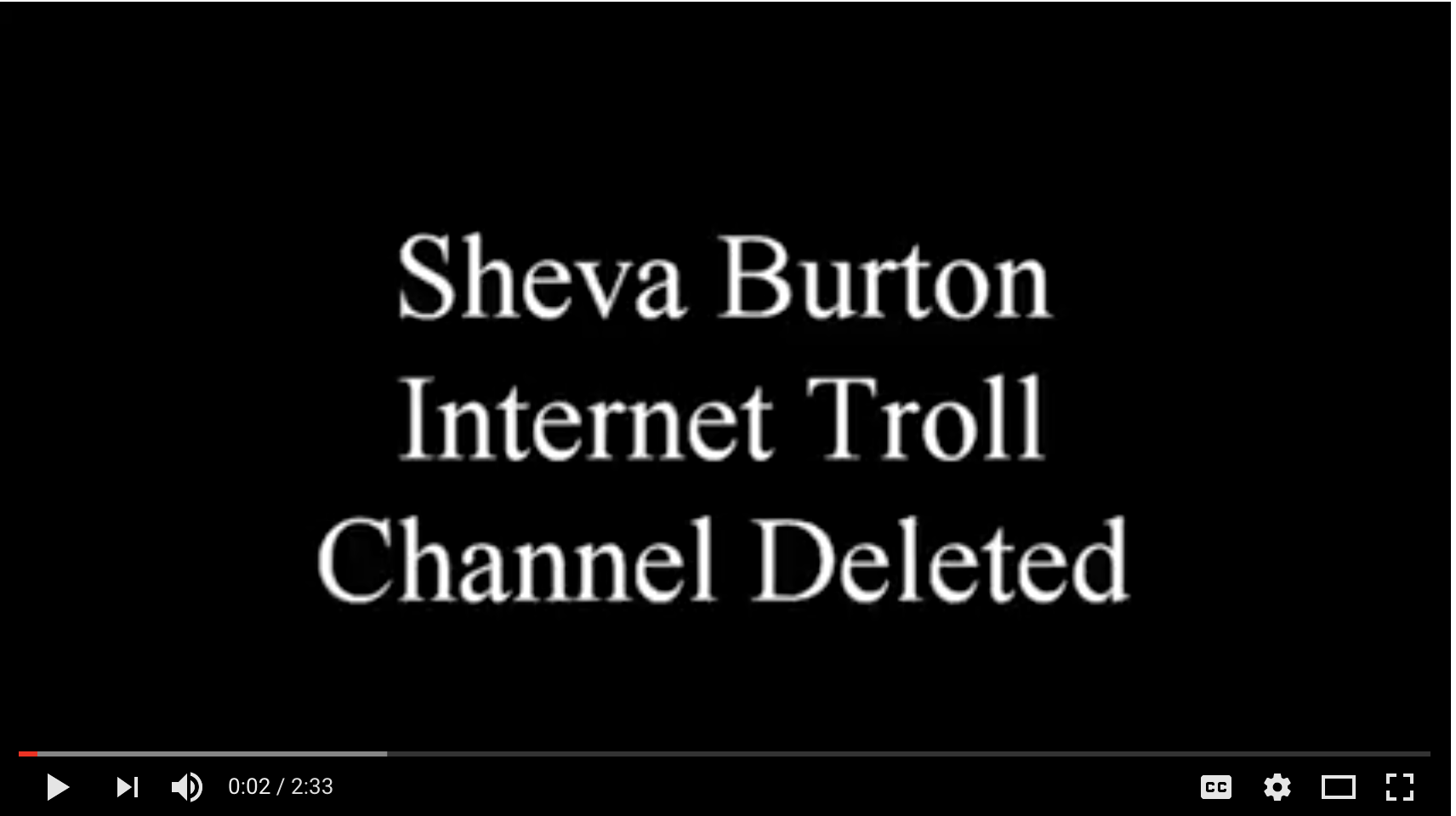 And here’s HoaxGirl thanking Cat Selvester for her video claiming that she’d been trolled by “14 Hoaxtead trolls” (but conveniently forgetting to mention that her friend Fabooka left death and rape threats against Outlaw Jimmy and his wife on the same thread Cat is complaining about…): 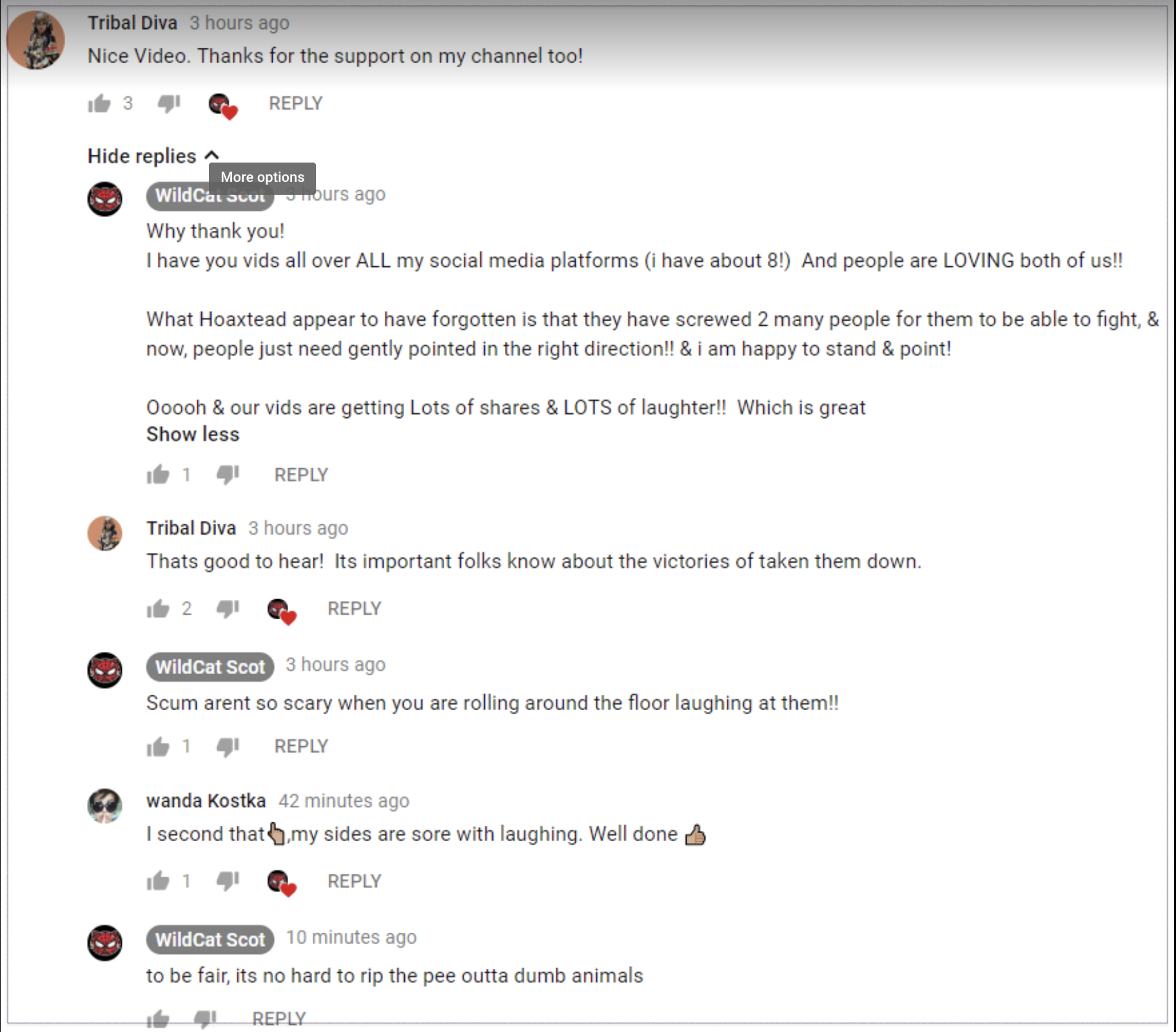 Meanwhile, Cat appears to be convinced that RD is not only associated with, but actually runs this blog (and trolls her, LOL): 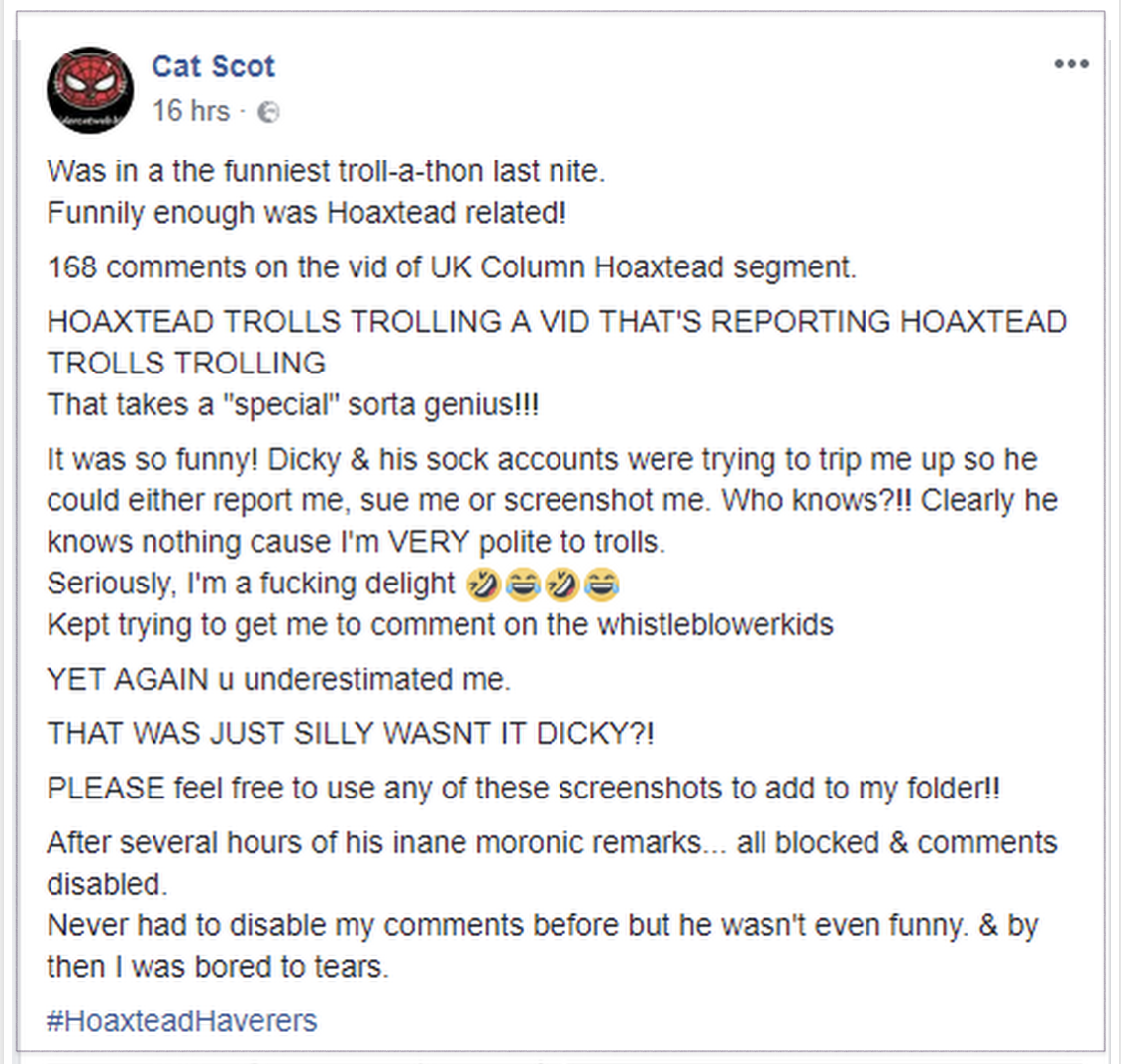 It’s all most interesting, especially when one considers the all-important question….

What are they all so worried about?

HoaxGirl’s motivation is pretty self-evident: she has been selling plans to her fake “free energy machine” to the gullible and ignorant for some years now, the scam is making her a tidy living, and she doesn’t want anyone to interfere with that. We’ve watched her systematically remove any online material which might be detrimental to her financial interests for some time now.

This does not fully explain her hatred of this blog, however. We think there are several potential reasons for that, some of which we cannot currently discuss publicly, but the most obvious non-QEG related grudge is that she has seen us exposing the frauds and deluded ideas of various of her friends and allies.

As for Cat Selvester, she is well aware that we oppose the actions of the Scottish “Fresh Start Foundation”, and that this blog is read by many who are involved in the fight against child sexual abuse. To Cat and her allies, we represent a very real threat, as CSA survivors—and worse, those who fund resources for them—could learn that the FSF is based on very shaky ideological premises indeed, and could withdraw their support.

In other words, we are debunking their “bunk”, and they don’t like it.

The fatal flaw in their argument

Catriona, Naima, and their ilk are all making a rather large assumption: they believe that the people who oppose them on YouTube, Facebook, Twitter, etc. are the same people who run this blog. Cat has said it herself: she thinks that she was trolled the other day by RD, who she also accuses of being behind this blog. We know there’s no point in asserting that he’s not, but…he’s not.

Based on this assumption, she and her friends believe that if they can report and remove the social media accounts of those whose opinions they don’t like, they will somehow destroy this blog.

Sorry, but it doesn’t work that way.

We’ve said it before and we’ll say it again: this blog is written by one person, and that person is not RD. Various people assist in various capacities, including comment moderation, research, and so on. We have always operated as a loose, decentralised collective, and as such, having one person’s YouTube channel removed, or another’s video taken down on a confabulated copyright strike, will have absolutely no effect on this blog.

We will continue doing what we set out to do three years ago: debunk lies, defend the innocent, and report on the activities of those who believe it’s okay to destroy lives for the sake of a fantastical hoax. Oh, and we’ll continue laughing at the Hoaxtead mob. 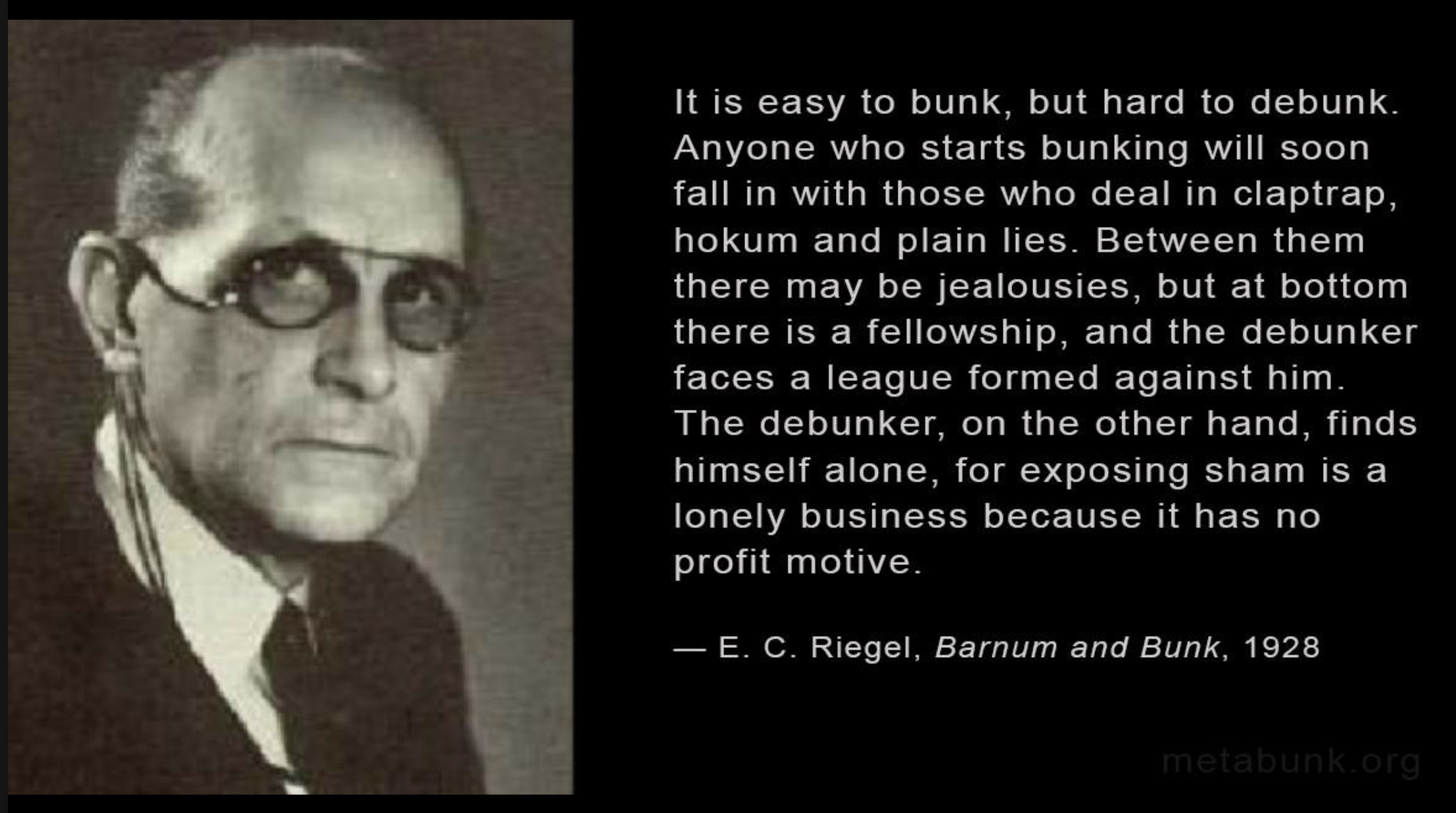 Hope Girl seems to have gone off the deep end again, and has been making snorting and snuffling noises about this blog having been hacked and all functionality shut down. Like this nice little porkie pie, for example:

Why is she so upset? Could it be that I failed to concede to her feeble attempt at blackmail? Long-time readers might recall that she tried to force me to remove all posts about her from this blog, or she would hold her breath until she turned blue, you just see if she didn’t!

Actually, what she threatened to do was “expose”—which is to say, harass and defame—members of my family. And God bless her, she’s been trying.

Not a very nice thing for a so-called Christian lady to do, you say? Well, I’ll just leave you to ponder that.

Oh, and by the way—if I “can’t continue to run the blog”, how am I adding this note? Just one of those imponderables of life, I suppose.

236 thoughts on “Why are the bunk peddlars so excited?”