The story of 22-month-old Alfie Evans is a sad one indeed. Since December 2016, he has been hospitalised in the paediatric intensive care unit (PICU) at Liverpool’s Alder Hey Children’s Hospital, where doctors agree that his as-yet unnamed neuro-degenerative disease has resulted in massive and irreparable brain damage. He is being kept alive on a ventilator, as he is unable to breathe on his own.

In a High Court judgment handed down on 20 February 2018, Mr Justice Hayden stated that what Alfie requires now is palliative care. He also denied the parents’ request that they be allowed to take Alfie to Italy, stating that while this might be worth considering if there were any hope of effective treatment, such is not the case. If he were to be taken to Italy, even the doctors there have stated that his condition would continue to deteriorate.

Alfie’s parents, while very young when they had him, have done everything in their power to help their son, and as Hayden J noted, have proven effective advocates for their son. They could not accept the High Court ruling, and appealed; on 20 April the Supreme Court ruling upheld the High Court and Court of Appeal rulings. Alfie’s parents, as one might imagine, are distraught and desperately looking for any way they can to help their son.

In other words, they are prime prey for trauma vultures like Tracey Morris.

According to posts on her Facebook timeline, she contacted Tom Evans, Alfie’s father, who has been leading protests against Alder Hey hospital. Tracey has been busily dousing an already inflammatory situation with petrol, sharing videos and Facebook posts in an attempt to exploit the grief of a young family and create as much uproar as possible. 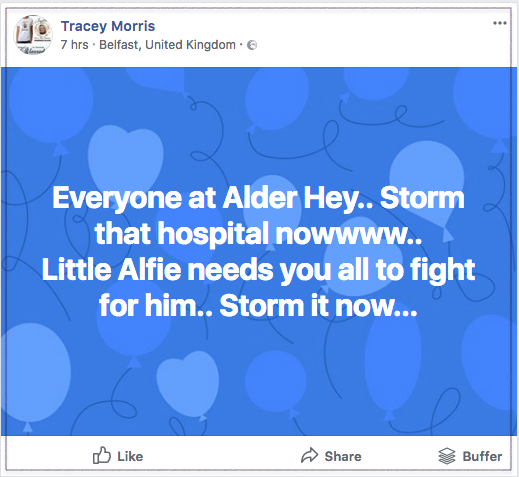 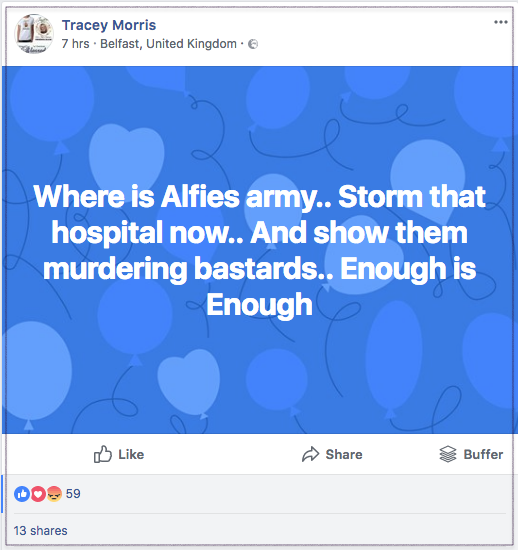 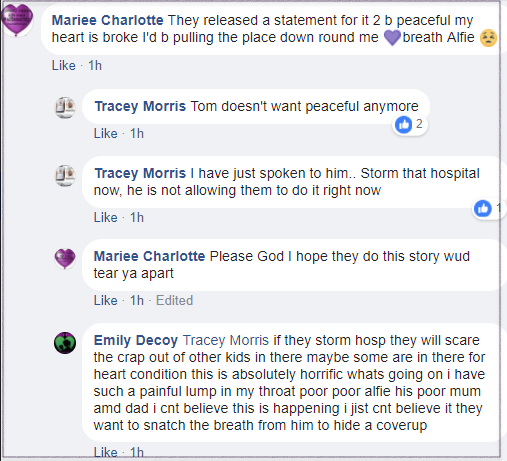 In her videos, Tracey shrieks that the hospital is about to “murder” Alfie with a “lethal injection”; she advises the child’s parents to “pull the tubes out!” and says she “told Tom to pull out the tubes to show the world that he can breathe on his own”.

“They would just love for Alfie to have a lethal injection and the mum and dad to have a payoff and for this all to go away”, she claims.

While we’re quite certain that Tracey cannot claim credit for this, a group calling itself “Alfie’s Army” stormed Alder Hey hospital yesterday, shouting and creating a chaotic scene which required police and hospital security intervention.

Tracey might not have started this, but she certainly made every attempt to inflame the situation, proclaiming over and over that the hospital was attempting to “murder” Alfie, and that everyone in Liverpool should “get down there and stop this from happening”.

Meanwhile, parents whose children are also in the hospital expressed fear and concern:

Most scariest thing ever. I went outside the entrance for a ciggi and Alfie supporters ran and stormed the hospital entrance. I was stuck in a corner of the revolving door with a pregnant  young girl with a pram surrounded by people punching and kicking their way through police to get into the hospital. I had to beg through the glass to be let back in. It’s absolutely mental here now.

People are commenting on Alfie’s Army page to set off fire alarms for the hospital to evacuate it. Please don’t. My Thomas is currently in theatre on the operating table.

As much as I think Alfie deserves a chance, my little boy does too.

Alder Hey currently on lockdown. With me inside. Thank god.

Clearly, she hasn’t bothered to read any of the judgments on the case, where multiple specialists testified that attempts had already been made to wean Alfie from the ventilator, and that he would choke to death on his own oral secretions if he were not intubated:

Tracey states that she and Linda Byrne O’Riordan “will be on a boat to Liverpool tomorrow”, and she repeatedly alleges that the hospital is seeking to murder Alfie: “[the hospital] know[s] what they’re doing to him, they’re killing  him with two lethal injections”.

Is Tracey being malicious or simply ill-informed when she states that “there’s only one tiny part of his brain that isn’t working”?

She claims, “We know what brain-dead people look like”, and states—as though she knows her arse from her elbow—that Alfie is perfectly healthy, but is being purposely made ill by the hospital, for their own nefarious but unexplained ends.

In fact, even the most cursory read-through of the court judgments in this case make it very clear that no doctor who’s assessed Alfie sees anything but a grim future for the boy. He suffers from frequent seizures, and while he does seem to have involuntary movements, they are not purposeful. The white matter in his brain has deteriorated so badly that it now resembles “water and cerebro-spinal fluid”.

Tracey’s claims that she knows differently are disgusting lies, pure and simple.

And her attempt to rush to the front of “Alfie’s Army” and take command are nothing more than her typical histrionic self-aggrandisement, writ large.

Edited to add: It seems from the live-streams on Facebook as though the hospital may have turned off life-support for Alfie. If this is the case, we wish him an easy transition, and hope his parents and family are able to find peace in this terrible situation.