In the 36 hours since Angela Power-Disney dropped her bombshell announcement—that she is withdrawing from promoting the Hampstead SRA hoax—the internet has exploded with excitement. Troofers everywhere are begging her to return to the fray, supporters of the hoax are weeping into their beer, and thousands have flocked to her GoFundMe page to help the chain-smoking old fraud launch her latest late-life career change.

In fact, the sum total of reaction to Angela’s about-face has come from some obscure loony in Australia: 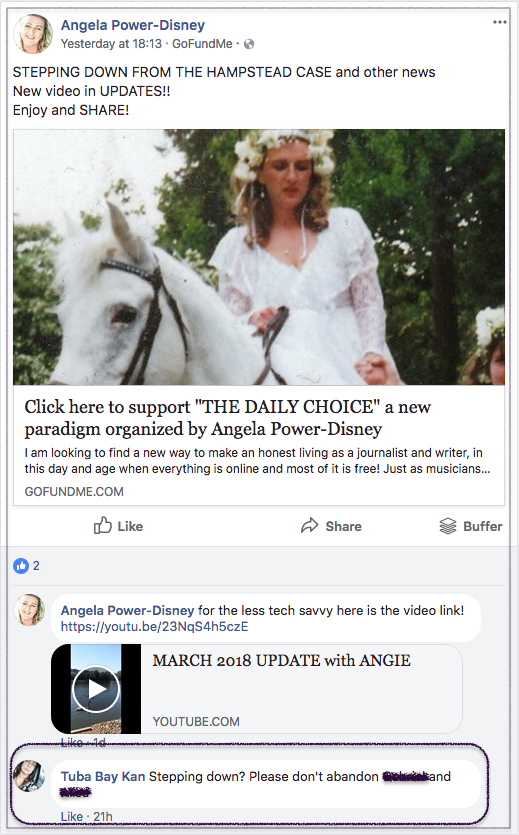 Whew! We don’t know how Angela could resist such a heartfelt plea.

So what made Angela decide to pull up stakes and move on from the hoax which has been her bread and butter for the past three years?

Here are some excerpts from her long, rambling, and self-justifying video:

I’m going to take a step back from the Hampstead case. It’s been three and a half years since the children were taken into care, and I have given it everything I had. …

Admitting defeat is too strong a word, although clearly, three and a half years later the children are still nowhere to be seen really, and in the custody of the state, with nothing more than rumours that they may be in custody of the father. …

Sabine McNeill is apparently not doing great in prison at all, she’s been remanded in custody pending even a trial. Her trial is not even until November and it’s going to cost vast amounts of money at the expense of the British taxpayer, which is…it’s just a show trial, you know, and Rupert was in prison for almost five months, he was a foreign journalist coming to investigate, do a documentary on the Hampstead case, um, Jake was sectioned and is still subject to supervision….

I’m certainly not stepping back out of fear. I think I’ve pretty much demonstrated, fear is not my forte. And I ask myself that sometimes, like why is the trolling…why have I survived it? …

It’s time for a miracle, and I’m giving it back to God and just saying, ‘You know what, God, I’ve run out of ideas’. …

Without God, without a miracle, I’m not willing to be 74 and locked up like Sabine, in poor health and with a protest that couldn’t even draw the public out. …

So just to clarify: Angela is totally not afraid, not even a little bit. Fear is not in her vocabulary.

However, she has woken up, smelled the coffee, and realised that it smells just a bit too much like “you will spend your twilight years in prison if you keep this nonsense up, you silly old bint”.

And we’re fairly certain that not only would the screws turn down Angela’s inevitable demands for full-body massages, essential oils, and daily fresh flowers in her cell, but being in prison might even limit her cigarette consumption. Horrors!

We think MKD sums it up nicely in video form:

Oh, and no, we won’t be holding a retirement do for Angela. Sorry to disappoint.