From time to time, we digress from watching the …er, the Hoaxtead mobsters behind their keyboards and webcams, take a step back, and look at the broader picture. One aspect of the Hampstead “Satanic ritual abuse” hoax which we have been finding particularly disturbing is that it seems to be at the crest of a new wave of Satanic panic.

Some of us are old enough to recall the last time this happened, in the 1980s and early 1990s, and it wasn’t pretty. Gullible and/or unscrupulous and/or mentally ill therapists, police officers, and parents converged both here and in North America, creating and feeding off their own hysteria, which built up to a witch hunt of epic proportions.

In the bad old days of the last Satanic panic, the issue was seized upon by the “mass media” as it was then known—basically television, radio, and print media. These days, social media has almost completely replaced the older forms of communication, and one day’s speculation becomes the next day’s viral meme—why, hello, #Pizzagate!—and off we go into a spiral of hysterical delusions, amplified by Facebook, Twitter, and YouTube.

Some of those who support this latest manifestation are veterans of the first Panic—people like Valerie Sinason and Joan Coleman of RAINS—but others (perhaps more disturbingly) are relatively young, seemingly progressive people who one would imagine might know better.

Then again, SRA promoters like Dr Michael Salter, a Criminology lecturer at Western Sydney University in Australia, weren’t around for the first Satanic panic…so what’s their excuse? HR commenter Justin Sanity has been making a bit of a project of examining and critiquing Dr Salter’s claims lately, and we think his insights are worth sharing.

Take it away, Justin!

My initial interest in this Dr Michael Salter, a Criminology lecturer at Western Sydney University, came from his being a friend, ally and apologist for some specific fraudulent “ritual abuse” claimants that I’d been “watching” for a long time. His apologetics were so over-the-top that I felt compelled to ridicule & mock them.

But as I’ve delved deeper & deeper into his subsequent career as an academic, supposedly conducting and publishing serious research, my bemusement has shifted into real concern.

Salter uses something called “qualitative” methodology, based on soliciting a subject’s life history narrative. In other words, he records and then “analyzes” what they tell him about their life experiences and how those have affected them. He makes no effort to objectively verify anything they tell him. He takes them at face value and assumes that what they say is valid and true.

He claims to be researching “organized abuse”, defined as: “where multiple adults conspire to sexually abuse multiple children”, but the people he uses as his subjects are drawn exclusively from the ranks of patients being treated by “trauma” therapists, and are all either self-identified as Ritual Abuse victims or “diagnosed” to be by a therapist

Salter never solicits, as subjects, people whose CSA experiences as victims of such perpetrator conspiracies is validated & documented through the conviction of their abusers. Obviously, there is no lack of those in our society…there have been numerous pedophile & pederast rings prosecuted between say 1970 and 2000, in North America, the UK and Australia, so there could be hundreds of PROVEN “organized abuse” victims for him to interview if they were willing to participate.

But Salter isn’t interested in them, and doesn’t try to include them in his research. His subject pool is deliberately restricted to persons whose claimed childhood Ritual Abuse experiences are unproven and unprovable, and are similar in nature to those of persons whose RA claims have been proven to be fantasies saturated with demonstrable falsehoods.

Which would be neither here nor there to me if this was simply a personal hobby, but Salter is presuming to generate “a body of knowledge” about Organized Abuse crimes, their victims and their perpetrators, including suggestions about mental health treatment of future child victims, that is based on & derived from fantasists but will be applied to genuine, documented victims of conspiracies where multiple adults conspire to sexually abuse multiple children”, as well.

This is very serious fraudulence, in my opinion, with potentially disastrous, permanent corruption of our understanding of CSA, its causes, prevention, prosecution and treatment.

In a recent article on Reddit, Justin pointed out:

Another amazing resource, documenting historic organized child sexual exploitation-abuse in the UK (and elsewhere in the world, involving British citizens) with scans of actual news coverage from the time, is Spotlight on Abuse:

This is a very comprehensive database documenting cases all the way back to 1960’s.

Note that a few controversial cases of CSA allegations that might seem unrelated to well known SRA accusation cases, such as Leeds 1985-1990 and Cleveland 1987, actually share an important common trait.

In all of these cases, social workers and/ or physicians attempted to use intuitive deduction methods to identify sexually abused children who had not made direct verbal disclosures of abuse. The widespread use of intuitive deduction in the 1980’s was documented in Sandra Buck’s “The RAINS Network in the UK”, 2008, a history of the Ritual Abuse Information Network. “…there were [social] workers in Congleton, Rochdale and Essex, all dealing with children who were trying to communicate terrifying experiences. They did this as children do, through their behaviours, drawings and play”.

The assumption by such professionals, that they could correctly “decode” from children’s behaviour, drawings and play, abuse events in the child’s life was tragically proven to be false – many times.

So Dr Salter’s “qualitative research” subjects are never required to provide actual evidence that any of their claims are true—they are merely observed and “interpreted” as-is, with no attempt at objective verification. This seems a bit of an eerie echo of the early use of “intuitive deduction” by therapists who believed they, too, could interpret the behaviour of children who they believed to have been abused.

It’s not about what actually happened, as determined by verifiable evidence, reliable witnesses, or even convicted perpetrators; it’s really all in the eye of the observer. 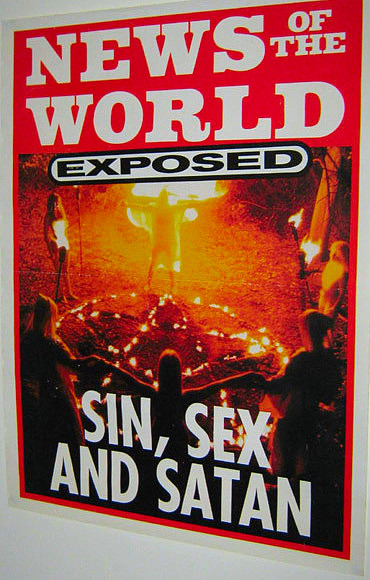