Following Wednesday night’s Facebook live-stream, Tracey Morris has stepped up her campaign against Sabine McNeill’s solicitor Noam Almaz, claiming that he is unfit to handle his client’s case.

Yesterday Tracey posted a string of abuse directed toward Mr Almaz, alleging that he was misleading Sabine’s followers by telling them to stay away from court on 19 March, the date of her next hearing: 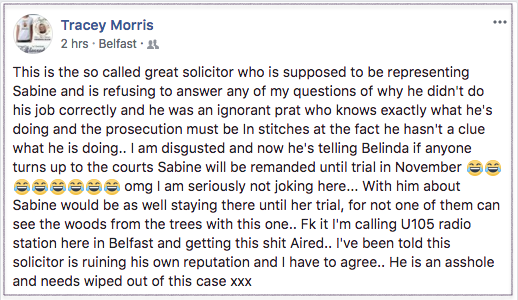 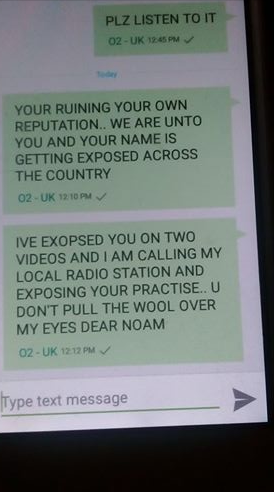 Tracey doesn’t say exactly what she will “expose” him for, but it seems that she believes that he ought to be able to get Sabine bailed rather than allowing her to remain in custody—a choice which would be up to the judge, not him. 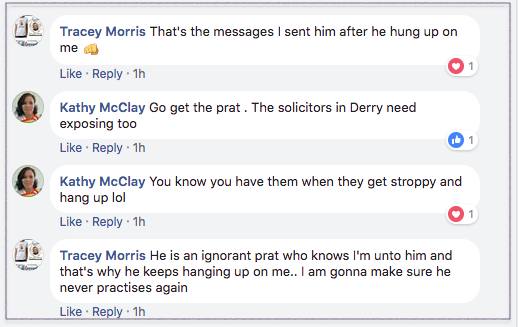 While we cannot comment on Mr Almaz’s performance as Sabine’s solicitor, those of us who were present at Rupert Quaintance’s trial last summer believe that his legal team, which included Mr Almaz, was competent and represented their client well.

However, as usual, Tracey knows far better than any trained professional how these things ought to go, and she won’t let a minor detail like “reality” stand in her way.

Weaselly Hall chimed into the conversation on Tracey’s Facebook wall, voicing his suspicion that sinister forces were at work, attempting to prevent Sabine’s followers from supporting her in court.

Tracey agrees, and accuses Mr Almaz of being “paid by them to sabotage this one like he did with the children”. We assume that she is referring to Ella Draper’s August 2015 appeal against Mrs Justice Pauffley’s judgment, but according to the judgment from that appeal, Ella was represented by Aseem Taj, not Mr Almaz. 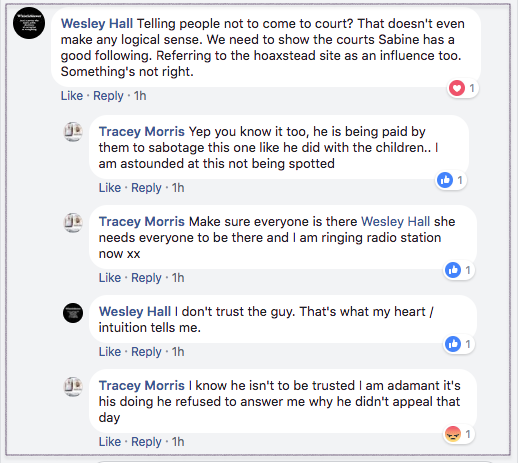 Tracey complains that Mr Almaz had the immortal rind to “refuse to answer [her] why he didn’t appeal that day”. This could be because Mr Almaz is responsible to his client, Sabine, and not to some nutter who calls to harangue him, but who are we to say?

“I’d love to see them keep her on remand they’d be sorry xx”: really, Tracey? Really? What are you going to do to “them”? 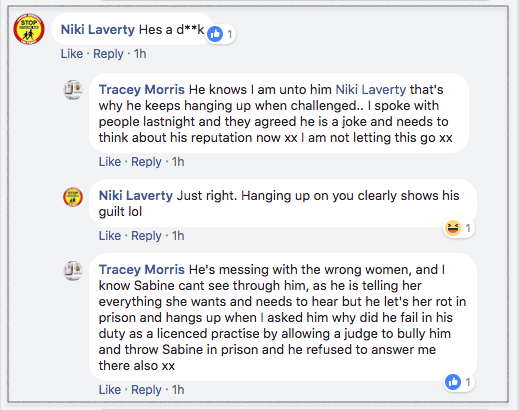 Erm, correct us if we’re wrong, but aren’t solicitors meant to be quiet in court and allow the barristers to do the talking? How does Tracey believe that Mr Almaz could have behaved differently, without winding up in contempt of court? 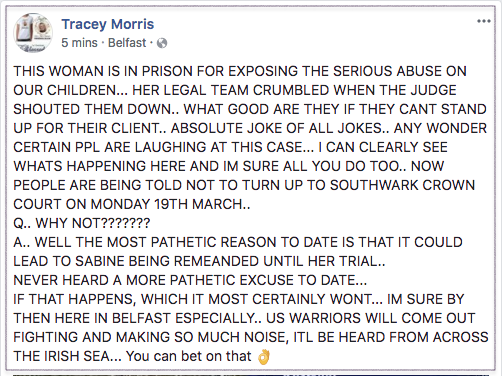 You know, if Sabine’s legal team believes that the presence of a contingent of Hoaxtead mobsters might imperil their client’s chances of being released on bail prior to her trial, we’d be inclined to accept their assessment, but that’s just us. Tracey and Weaselly, we’re sure, will handle this in their own inimitable fashion, and good luck to them.

Bad news, Mr Almaz: now Tracey is saying she is “ready to blow [her] top with this and tell everyone what [she] really think[s] is going on here”.

And you thought she’d already done that? Clearly, you’re not familiar with Blabbergob and her entertaining ways.

No, now she’s planning to contact a radio station to help broadcast her defamatory slurs even further afield: 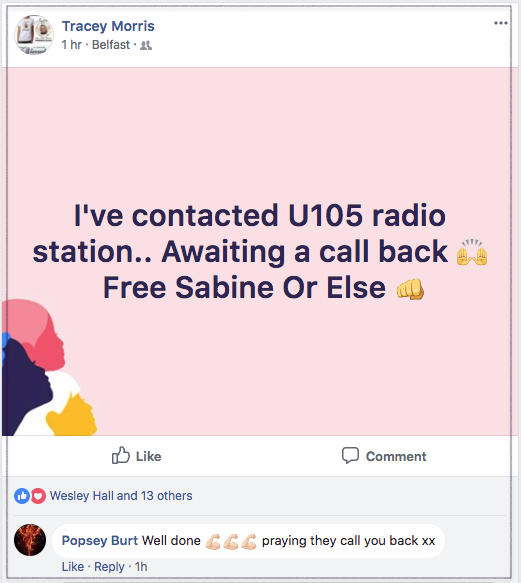 Here we see Tracey unveiling her new campaign slogan: “Free Sabine Or Else”, with a clenched fist as punctuation. [Punch-uation, shurely?—Ed.]

We do like to be helpful, so we’ve come up with a poster which Tracey should feel free to use: 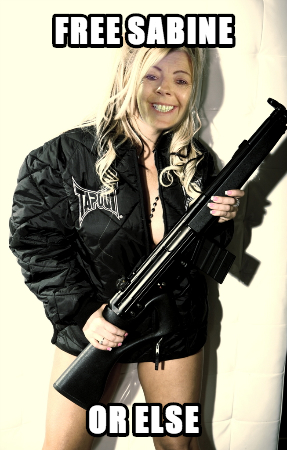