Over the past three years, people who contribute to or comment on this blog have received a fair bit of flak over the fact that many of us prefer to use pseudonyms when we post here.

We thought it might be useful to take a look back in time, to the heyday of HR’s namesake “Hamster Research” and its owners, Charlotte Alton Ward and her partner Jacco de Boer—formerly known as “Jacqui Farmer” and “Video Man” respectively.

Unless you’ve been following us from the very beginning, you might not be aware that one of the many vile tactics Charlotte used was bombarding supposed “cult members” with threatening and harassing emails.

Charlotte’s one-time ally, Drifloud (aka Alan Wrightson), was also notorious for sending long, droning emails to everyone he could think of, though frankly his were so overtly deranged that they were a bit easier to ignore.

And then there were the videos: every couple of days, “Jacqui” and “Video Man” would post yet another defamatory video, accusing parents, teachers, clergy, business owners, and their extended network of family and friends, of all manner of horrific and vile crimes.

We’re sure it won’t have escaped your notice that all three people we’ve mentioned so far went to some lengths to disguise their real identities, while they relentlessly mined their victims’ social media accounts for anything which might seem even remotely “incriminating”.

A father walks hand in hand with his small daughter? Clearly, he is on his way to sell her into sex slavery.

A few teachers and friends meet for drinks on a Friday? Obviously they are getting together to discuss cult business.

One parent is Facebook friends with another whose child attends the same school? Well duh. CULT MEMBERS. Obviously.

Charlotte, Jacco, and their friends didn’t stop at posting this material on their vile blog, either. They began emailing their targets’ employers, social contacts, even their tennis clubs, in an attempt to cause irreparable damage to the reputations of those they’d already decided were guilty. 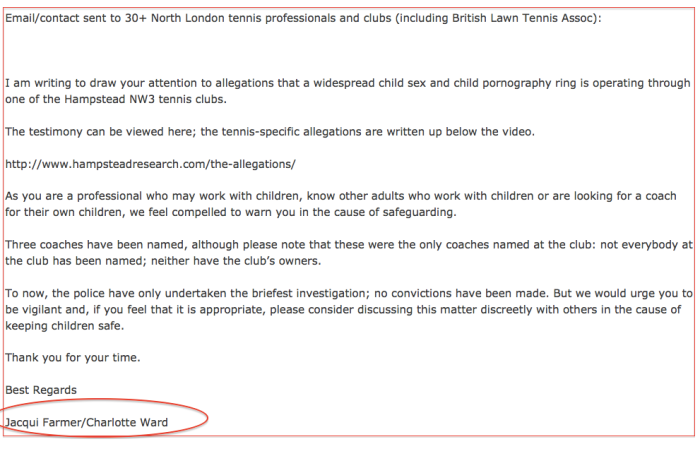 This example is one which doesn’t name names, but there were plenty more that did.

Once Charlotte Ward and her friends had successfully terrorised the Hampstead community, they began directly targetting individuals.

We were told of one episode, which would have been funny if it hadn’t involved direct threats to the person in question.

Shortly after we’d uncovered “Jacqui Farmer’s” identity (not via hacking, but through good old-fashioned detective work), one of the people she’d targetted wrote to Charlotte using her real email. Turns out that Charlotte wasn’t too happy about this:

As you are probably aware from the Hampstead Research blog, today I received an email from your work email address that had been sent to my private email address.

As I make clear on the blog I use a pen name because I mention an ex lover in my book (which has been on sale at Lulu for around 7 months now) and do not wish to embarrass him as he has done nothing wrong.

This is why I prefer to remain anonymous.

[Not because what she was doing was highly illegal, shurely? –Ed.] 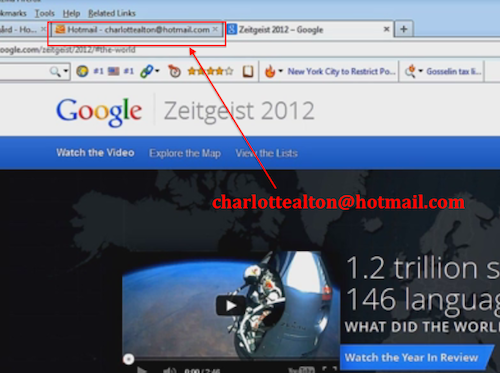 Screenshot from one of Charlotte’s pre-Hoaxtead videos, showing her real name and email address

So it looks as if you are an accessory to the crimes of hacking and harassment. …

The fact that you are demonstrably complicit with these people only adds weight to the children’s allegations that you are an active member of a paedophilic death cult.

This was accompanied by a short but vicious blog post:

And this is only one small example.

Keeping our heads below the parapet…for now

Those of us who eventually came together to produce Hoaxtead Research learned very quickly that discretion was the better part of valour. Painful as it was to watch an entire community terrorised by a gang of online thugs, none of us wished our families and friends to meet the same fate.

Nothing that we’ve seen from the Hoaxtead mobsters since that time has persuaded us to change our minds. While we’ve been lambasted for our choice to remain anonymous by the likes of Alan “Not my real name” Alanson and Kristie Sue “I’ll just hide behind my daughter” Costa, most of us have opted to put personal safety above online heroics.

Perhaps once this vile hoax is behind us, and those responsible have been properly dealt with, it will be time to remove the masks. But that will be a choice for each individual to make, when the time is right. 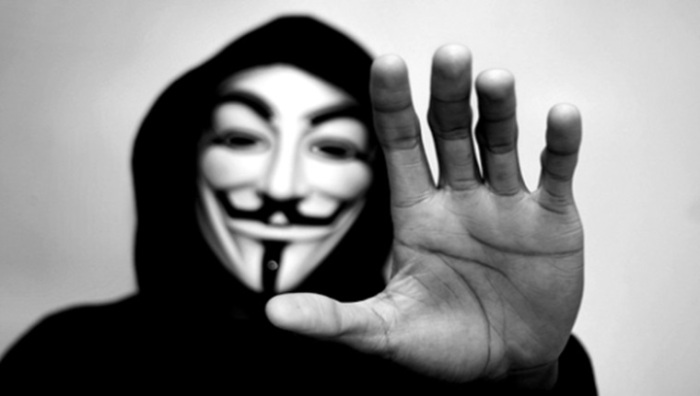 95 thoughts on “Why we use fake names”