It seems that Edward William Ellis, the struck-off solicitor who appears determined to “help” his friends (including Neelu Berry and John “The Shnozz” Paterson), is yet again in serious legal difficulty of his own. According to the daily lists at the Royal Courts of Justice, Mr Ellis will be appearing before Mrs Justice May this morning at 10:30 for the beginning of a three-day “Application to Commit” proceedings. 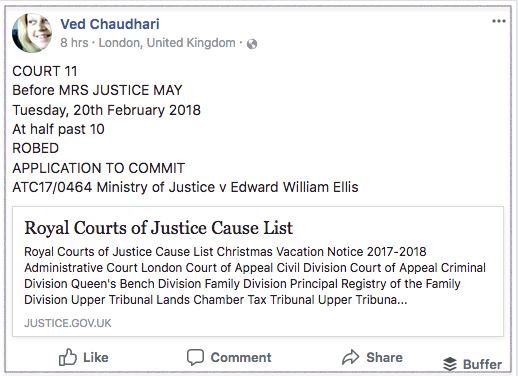 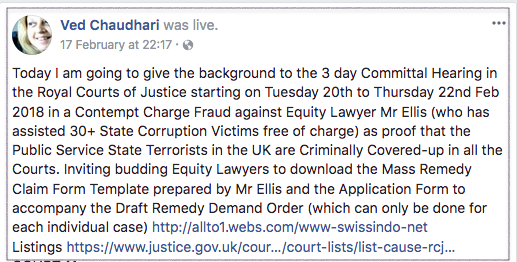 Our understanding of “application to commit” is that it refers to committal of a person to prison for contempt of court. In Mr Ellis’ case, this appears to be the result of his having breached a Civil Restraint Order, which was meant to restrain him from issuing claims on behalf of others, or from assisting others to bring claims in contravention of the Legal Services Act.

We were first introduced to Mr Ellis during Neelu and Sabine’s trial for conspiracy to commit witness intimidation in July 2016. At that time he strode into the courtroom prior to the jury having been sworn in, announced in a booming voice, “THIS IS EDWARD WILLIAM ELLIS, EQUITY LAWYER, SPEAKING FOR THE RECORD”, and then proceeded to explain to the judge that he had just finished an application for claim regarding this case at the RCJ. Therefore, he claimed, this trial could not proceed (presumably because the High Court trumped Crown Court jurisdiction). The judge looked somewhat surprised by this unorthodox intervention, but retained his composure and said that he was “not minded to delay proceedings”. Mr Ellis, though visibly disappointed, was gracious in defeat.

Readers might recollect that this Application seems to be an ongoing effort; we reported late November, and then again in early December last year, that Mr Ellis had managed to get himself ejected physically from the Royal Courts of Justice while his Application hearing was in process. According to Neelu (always such a credible witness, but she’s the best we’ve got):

Our lawyer was physically man-handled and lifted from his seat by his elbows and shoulders in Court 37 by 5 security guard and 5 Queen Bench Division court managers. This all started when one of the Masters of the QBD was accused of money laundering.

A couple of weeks later, presumably having given it some thought, Neelu characterised Mr Ellis’ removal from the Court as a “disappearance attempt”:

Recently, there was a disappearance attempt on an anti-corruption lawyer, who was prevented from attending his own committal hearing for alleged contempt of court for helping people fight corruption.

The case was not called, which meant the public were excluded whilst the judge conducted a single sided hearing in private. So the lawyer would have been arrested for not turning up for his hearing whilst being forcibly excluded from entering the building.

One of his supporters stopped the hearing and got it adjourned whilst the judge Ordered Security to allow him in (surprisingly, the judge was not surprised that this had happened – clearly they used facial recognition or photographs of the lawyer to alert Security Officers to ban him from his own hearing for the purposes of disappearing him).

This is the third time there has been a failed committal hearing of the same anti-corruption lawyer. The RCJ continues to enforce a ban on his entry to the building even though many judges have ordered that he been allowed entry to represent anti-corruption cases for State Corruption Victims.

According to Neelu, today’s court appearance will be the fourth attempt to commit Mr Ellis; let’s hope that this time, it takes. 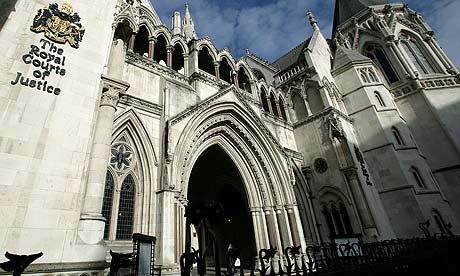