Jake Clarke and his friends seem all too eager to share details of Jake and Sabine’s interviews with the police over the weekend. 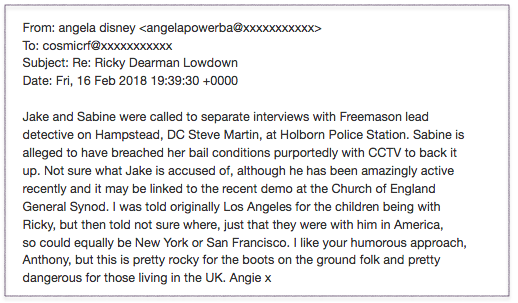 Leaving aside the gibberish about RD and his children, Angela seems fairly convinced that allegations about Sabine and Jake’s activities at the Church of England General Synod on 10 February are backed up with CCTV evidence. Where she would have got such information is anybody’s guess; ours is that she pulled it out of her amply padded derrière, where most of her “intel” seems to live.

She’s quite correct about one thing, though: Jake has been “amazingly active recently”.

We wrote about that in December , when Jake posted his latest cunning plan on Facebook:

He also hinted at that time that he was attempting to locate RD’s children via Barnet local authority, and kidnap them in order to deliver them into the hands of their abusive mother and boyfriend: 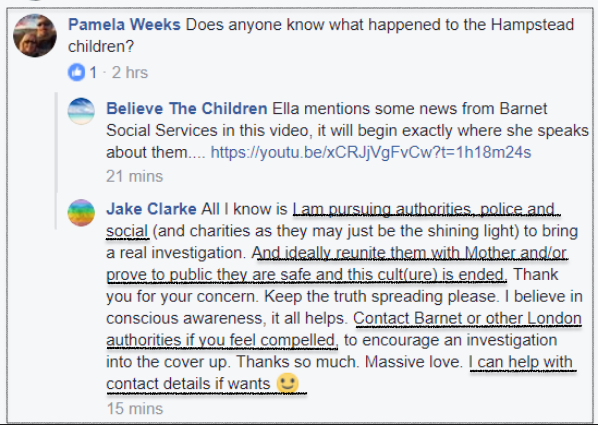 So to be honest, his most recent encounters with the police did not exactly surprise us. His antics at the General Synod appear to have been just another part of his one-boy campaign.

Another county heard from

Another of Jake’s “friends”, the irrepressible Arthur Kaoutal, offered further details, this time from Jake himself:

I feel I should make this public why should i hide it?? Me and Sabine have been asked to attend Holborn police station for seperate meeting with DC STEVE FARTIN’ today.

My meet at 2:30pm. My dads coming with me as a responsible adult because I still have Mental Health Service involvement. So that’s good as they listen to those whom are senior professionals in society over young hippy hoodies like myself.

I care not if hoaxtwats see this. I don’t know what else to say at this moment though if you have any questions cooly.. if not i’ll get back to you later, If I’m contactable.”

Ooh, “DC Steve Fartin'”—with that kind of witty repartée, how could Jake’s police interview fail to be a smashing success? Never mind, we’re sure that DC Martin’s time on the CAIT team has prepared him to deal with sulky 12-year-olds.

Despite all his friends’ sharing of his situation vis à vis the police, we’ve yet to hear directly from Jake what happened at his appointment on Saturday. We’ll keep eyes and ears open, and will bring you updates as they occur.

We note as an aside that Arfur is welcoming Ella to his exclusive club of lady friends—no doubt he has mistaken her for one of his “maternal women”. We wonder how Ella will take to being ordered to “start being more active on fcbk”?

But even more interesting is this email: it looks as though Jake has been attempting to act as peacemaker between Ella, Angela, and Sabine:

Seems Ella’s not interested in rapprochement with “disinfo agent Angela Disney or with agent provocateur Sabine McNeill and the rest of the gang”. Some people just seem unable to let bygones be bygones, don’t they?

And there’s little Jake, bless his cotton socks, saying that Ella is just being “uber cautious”. Frankly, we think she could have been a bit more careful in choosing her friends in the first place, but perhaps that’s just us.

Funny that Ella wants to avoid having her time “wasted on receiving, reading and deleting some irrelevant information, rumours, etc.” Given that she and Abe are lounging about in Spain, raising weed and chickens and staring meaningfully into one another’s eyes, we’re not sure what extremely important business she’s had to attend to.

Come on home, Ella, we miss you and your deranged greasy midget! We can reminisce about old times, it’ll be brilliant! We’ve even reserved a spot for you at the local Iron Bar Hotel. All expenses paid. And look, we’ve even brought in a dancing monkey for your entertainment….