We received some interesting news yesterday: apparently two of Araya Soma’s three Facebook profiles have been removed, leaving behind only her Araya Manna profile:

Bastards I had soma since 2006, all memories wiped but never mind I rather speak the truth and lose everything than keep mouth shut and live a lie

We should note that the deletion of Araya’s two profiles didn’t “just happen”: it came about as a result of multiple complaints about her ugly, false, and disgusting anti-Semitic posts, by several people, over a long period of time. (Period, geddit? No? Okay, never mind….)

So it was a real vindication when one of our readers opened up their Facebook Support in-box to find two notifications like this:

Of course you know that Araya won’t go down without the requisite bitching and moaning.

We found this one in her “Cancer research is a scam, CANNABIS cures cancer” group (not to be confused with Slain Crater’s “Cannabis Cures Cancers, hey, where are you all going, I only said everyone in Hampstead eats babies! You probably all do too! Waaaaaaah!!!” group): 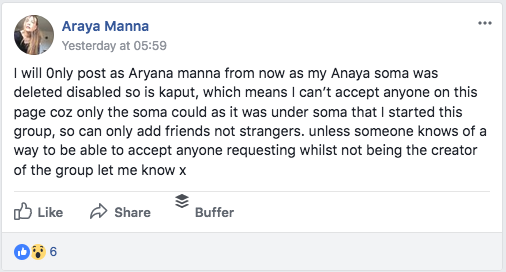 But don’t worry, Araya has a Plan B: she’s trying to convince all her Facebook friends to follow her over to that site no one uses, MeWe, where she can once again regale them with her lies, fairy tales, and complaints that no one listens to her.

Au revoir, Araya, and don’t let the door hit you in the arse on your way out.

Two out of three ain’t bad…let’s see if we can’t get that third profile deleted before she leaves!

And for all those who reported her, we raise a toast in your general direction!

79 thoughts on “Araya Soma: Two out of three ain’t bad”