When this blog began publication in May 2015, founder Scarlet Scoop set out one over-arching rule to which we’ve adhered, both in our posts and the Comments section: threats of any sort of harm, and in particular death threats, are completely off-limits.

This seems like such an obvious choice that it needn’t be stated at all.

But as you can see in the Hamphoaxer Trolls section of the blog, those who claim to believe that we are a crew of child-raping, baby-murdering, cannibalistic Satanists feel no compunction about threatening the most horrible, gory, blood-curdling deaths upon us and anyone who agrees with us.

The multiple threats we’ve received daily from John Paterson are remarkable mainly for their consistency, but we’ve been on the receiving end of many more death threats over the past two and a half years.

Yesterday “The Shampoo Liberation Front” posted a small sample of the filth that emanates from Malcolm Konrad Ogilvy and his friend John Banks: 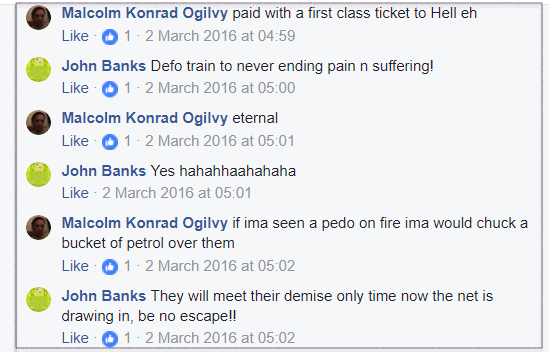 And Frisco 66 shared this one from Praterson:

And a couple from our Alan Alanson collection:

Are these what the police and courts would call “credible death threats”, in the sense that they represent a real and present danger to life and limb? We’d have to say that the majority are not.

Some, however, are, and they’ve been reported to the police.

Our point is not whether the threats are “real and credible”, but that those on the other side seem to feel compelled to make them at all.

What sort of person would wish “eye cancer” on another person, or entertain fantasies about murdering them in the most horrific and grotesque ways possible?

On the face of it, it makes no sense: those who oppose us claim to represent the forces of goodness and light. They claim that they are only acting out of the goodness of their hearts to “save the children”, and that they have a monopoly on virtue, empathy, and kindness. They claim that God (or in certain cases Jah) is on their side.

Yet they are the ones who seem capable of wishing the most sadistic, bloodthirsty fantasies upon those who dare to assert that they are wrong in their beliefs. They appear to derive pleasure from this; they congratulate one another on particularly grotesque threats, and click the “like” button with depressing regularity on one another’s threats toward us.

It says a great deal about the Hoaxtead mobsters that when their cherished belief in the worldwide Satanic/Illuminati/Masonic/Jewish conspiracy is threatened, their first instinct is to revert to fantasies of violent retribution—and even more revealing that they seem to feel perfectly comfortable expressing these violent fantasies, over and over, in public. Clearly, they believe that their behaviour is considered appropriate, at least within their own online community.

Some of those who spew the most hateful death threats seem to be convinced of their own self-righteousness: these are the sort of people who seek out those they believe have “broken the rules”, and exercise what they believe are “appropriate” punishments. It seems as though the more they dominate and punish others, the more satisfaction and power they feel.

Others seem, frankly, mentally ill and out of control. They appear to relish the feeling of power they get from menacing and brutalizing others, and will choose targets who they believe will capitulate easily; when this doesn’t happen, they become even more enraged and step up their campaign of hate.

Probably the easiest way to conceptualise the sadistic fantasies of the Hoaxtead mobsters is via comparison to the witch trials of the Middle Ages. Those who hunted and tried witches elevated sadism to an art form, devising unbelievably ghastly torture devices which would both identify and punish those they believed were consorting with the Devil:

Before the opinions of philanthropists held sway, torture was a necessary part of most trials. The witch hunt trials were no exception. The following punishments, tortures, and ordeals were meted out to many accused witches as part of secular or ecclesiastical court methods.

People used many kinds of tests to determine whether a woman was a witch. For example, they looked for moles, scars, or other marks on the woman’s body where a pin could be stuck without causing pain, such devil’s marks were said to be places where the Devil had touched the accused woman. Devil’s mark also included birthmarks. In another test, people tied the suspected woman’s arms and legs and threw her into deep water. If she floated, she was considered guilty of being a witch. If she sank, she was innocent.

Torture was as much an intrinsic part of witch trials as genital searches. “Although in ordinary cases torture might be a last resort, in the exceptional crime of witchcraft it was often seen as society’s first and only instrument”. The most popular forms of torture, the strappado, the thumbscrews, and the rack, were applied to men as well as women. However, some forms of torture were devised for women in particular, and these tortures were sexual in nature.

In this context, “genital searches” for “moles, scars, or other marks” is directly comparable to the troofers’ obsession with tattoos, moles, and birthmarks on those alleged by Abraham Christie and Ella Draper to be “Satanic paedophiles”. And while torture is no longer socially condoned in most circumstances, threats and fantasies of torture are an acceptable, possibly even expected, tool in the modern-day witch-hunter troll’s armament.

Believing that anyone who supports RD’s children as we most emphatically do—by realising that they were forced to tell lies by their mother and her boyfriend, and understanding that they need protection from the public exposure the Hoaxtead mobsters have forced upon them—must be a “paedo protector”, a “Satanic paedophile”, and the like, seems to afford the Hoaxtead mobsters the ideal opportunity to play out a very ugly internal psycho-drama on a group of people they hate. And yes, they hate us, despite claiming to be God-fearing Christians.

And that says a great deal more about them than it does about us.