A couple of days ago we noted an article in The Telegraph with the headline “Belief in witchcraft and demonic possession linked to 1,500 child abuse cases“. This isn’t the first time the issue of “witchcraft child abuse” has hit the news in recent months. In May 2016, the BBC reported that the practice of subjecting children to serious abuse in an effort to “cure” them of witchcraft, or to “drive the evil spirits out” had risen precipitously.

In their story, the BBC quoted Prof Jean La Fontaine:

Prof Jean La Fontaine, a witchcraft expert from the University of London who has studied more than 30 of the cases reported to the Met, said “terrible things happen” during exorcisms.

She said young people who are at risk “are completely silenced” at present and has called for a helpline to be set up to “empower children”.

(It’s worth noting, if only parenthetically, that Charlotte Alton Ward was mentioned in the Acknowledgements section of Prof La Fontaine’s book on children and demonic possession.)

Those who follow the antics of Belinda McKenzie and Sabine McNeill’s “Association of McKenzie Friends” (AMF) might recall that the children in the infamous Musa child abuse case reported having been subjected to attempts to exorcise evil spirits. Bishop Gloria Musa and her husband Joseph were both given long prison sentences in 2012 for “shocking mistreatment” of their six children—and were vigorously defended by Belinda, Sabine McNeill, and her friend Maurice Kirk, who claimed that the children had been lying.

A Telegraph article at the time stated,

The Nigerian couple, who claimed their kids were possessed by evil spirits, beat them with brooms, hoovers and wires and even gave their baby a morphine overdose just days after her first birthday….

Sentencing them to seven years behind bars each Judge James Patrick described it as “shocking mistreatment” that they had tried to cover up with a “web of deception”.

According to the Musas’ eldest daughter, who dropped a letter out of her bedroom window in a last-ditch cry for help, “My mum is the worst mum ever because she can’t cope with five of us, her broken hand and being pregnant. She always leaves me out so I always starve and I am forced to work. If I don’t get enough house work done, I am beaten without mercy with the wooden end of a broom. I have scars all over me to prove it. I can’t stay here. I would like a new mum”.

She also stated that her father had dangled her by her feet down the stairwell of the house, tied her hands behind her back and her legs together “to get the devilish spirits out”. She and her siblings showed investigators stick-shaped bruises on their bodies, and spoke of being left alone for hours, sometimes days, without food.

At the time, the Daily Mail reported:

Two children at the centre of a long-running High Court case that has “attracted notoriety” are to be given new identities because of fears that their security is in danger.

The Musa siblings have been placed together with an adoptive family by the London Borough of Haringey.

Both their parents are currently serving jail sentences for child cruelty and not allowed contact.

There has also been a dispute over the contact the children, referred to as “A and B”, should have with five elder siblings who are in foster homes.

The legal proceedings which have involved several judges began in 2010 and have attracted widespread publicity on the internet and the media.

The court heard there have been threats to abduct the children, and campaigners are seeking to locate them, portraying them as victims of injustice.

“The evidence is all one way – and strongly one way – that the court has no alternative but to change both their surnames and forenames with immediate effect.”

The judge also ended a 2012 contact order that allowed “reasonable direct contact” between the elder children and A and B.

He substituted it with one allowing only “indirect contact”, which means, it is understood, communication through letters and cards.

The judge said he had absolutely no reason to think all the children did not get on well together, but “lapses and pressures” caused by the case constrained him to make that order “for the time being”.

The judge referred to “the notoriety this case has attracted”.

He said that during this week’s hearing at the Royal Courts of Justice in London a demonstration was held and “there were somewhat agitated people outside court” and leaflets and fliers were being distributed.

Because the family was from a Nigerian background, a member of the Nigerian High Commission in London had come to court and the case had been discussed in the Nigerian Parliament.

The judge said he was hearing the case in public because of the publicity it had already generated and because “secrecy breeds suspicion and leads to the most extraordinary and ill informed results”.

The judge said the mother of A and B had issued a statement from prison dissociating herself from the “unbridled” campaign aimed at seeking to locate her children.

“Here are children whose very security and future is being put in danger by those who seek to portray their position as an injustice.”

It was ironic, said the judge, that the campaign had led to a situation in which the vulnerable and innocent children and their adopters had no idea “what lies around any corner they turn”.

Exorcism at the Highgate Hub…?

We know of another case linked with the Belinda McKenzie, in which a young person was alleged to have been “possessed” by spirits.

In fact, Charlotte Ward (writing as Jacqui Farmer) describes the situation in her e-book, Illuminati Party: 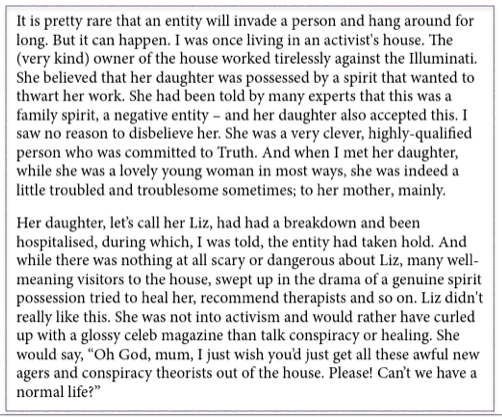 According to Charlotte, this “very kind” activist “believed that her daughter was possessed by a spirit that wanted to thwart her work. She had been told by many experts that this was a family spirit, a negative entity—and her daughter also accepted this”.

Belinda has discussed her mentally ill daughter on videos in the past, and in public has stated that she has schizophrenia.

In private, though, it seems that she has conveyed quite a different message. The fact that Belinda’s daughter “accepted” her mother’s friends’ diagnosis of “demonic possession” is alarming in the extreme. People who suffer from schizophrenia are prone to delusions, and leading them to believe that their symptoms are caused by demonic possession rather than a mental illness can cause immense harm: they may hurt themselves in an effort to “self-exorcise”, or they can be susceptible to other people’s attempts to “drive out the demonic entities”.

We don’t know exactly what may have happened to Belinda’s daughter, though Charlotte claims that “many well-meaning visitors to the house, swept up in the drama of a genuine spirit possession tried to heal her”. What form did this “healing” take?

The fact that Belinda and Sabine saw nothing wrong with the mistreatment the Musa children received in the name of “getting the devilish spirits out”, and indeed campaigned vigorously to have the children returned to their abusers, leads us to wonder what sort of abuse might have taken place in Belinda’s own home. 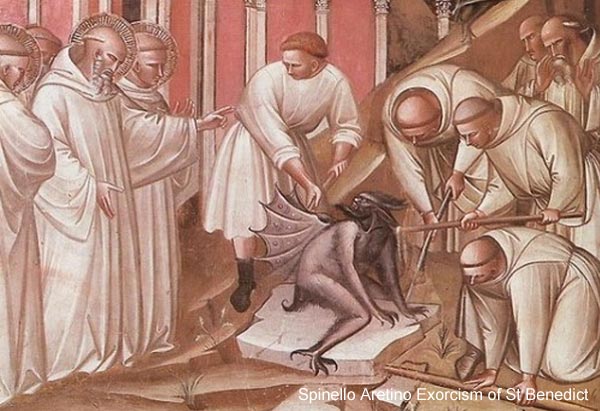 122 thoughts on “Witchcraft and demonic possession amongst Hoaxtead promoters”