We’re always entertained when Hoaxtead mobsters turn on one another, and it seems to be happening with greater and greater frequency of late.

For example, long-time readers will recall that John Graham, aka Butlincat, has been a fanatical supporter of the Hampstead “Satanic ritual abuse” hoax since it began. He’s happily shared illegal and harassing posts from people like Belinda McKenzie and friends, and attended the protests outside Christ Church Hampstead. Prior to Hoaxtead, John involved himself heavily in the Holly Greig hoax, so he has form for hoax-pushing.

Granted, as early as August 2015, he seemed to switch allegiances from Team Belinda (comprising Belinda, Sabine, Charlotte, et al) in favour of Team Abrella (comprising Abe, Ella, Code/Guidance 2222, Drifloud, et al). And he did inadvertently confirm Charlotte Ward’s real name at a time when she’d have rather he hadn’t…which could explain why he was on the outs with her and her friends.

It seems he still wastes no love on Belinda, and his scorn for Sabine is palpable at times:

And now, Butlincat seems to be taking on John “The Schnozz” Paterson, whom he accuses of spamming him with offensive emails: 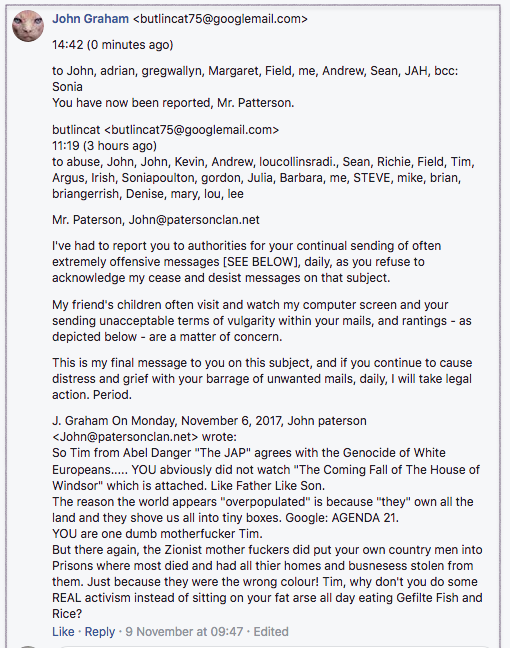 I’ve had to report you to authorities for your continual sending of often extremely offensive messages [SEE BELOW], daily, as you refuse to acknowledge my cease and desist messages on that subject.

My friend’s children often visit and watch my computer screen and your sending unacceptable terms of vulgarity within your mails, and rantings—as depicted below—are a matter of concern.

Just to be clear, it seems to be the SchnozzMeister’s salty language that has Butlincat in a dither. In the message from Paterson to which he refers, the problem seems to be the word “motherfucker”, used twice. Naughty, naughty John.

We are as certain as we can be that it’s not Schnozzola’s rabid anti-Semitism and neo-fascism which has the prissy Mr Butlincat all fahrklempt. After all, he’s also posted this:

Yep. John Graham/Butlincat thinks the neo-Nazi ultra-nationalist Britain First, which incidentally was recently statutorily deregistered as a political party, is A-okay with him.