Because we haven’t been writing enough about Tracey “The Gob” Morris lately (ahem!), we thought we’d bring you an update on her latest: apparently she and her 22-year-old son Aaron have now received non-molestation orders…except maybe they haven’t, because Tracey says she refused to take hers even though that’s illegal and you don’t really get a choice in the matter, but maybe they have, because she’s talking about a court date next month, except maybe it’s not a court date, but only an appointment, who knows?

Yes, she’s been live-streaming on Facebook again, and making about as much sense as usual.

Oh, and person or persons unknown may or may not have kicked her door in. Was it the police? An angry neighbour? Tracey’s imagination? Again, hard to say.

Many thanks to commenter Daisy, who very kindly put together a summary of proceedings:

There is nothing more embarrassing than watching someone pretend to know the words of a song & only getting it right during the chorus, I know this, because that is me! I make up my own words, always wrong, but good for a laugh! But I don’t livestream my embarrassing moments. 😊

Regarding her door being put in, if true, that is totally wrong & I hope whoever did it gets apprehended. There are children in her house who have never done anything wrong, their lives have been disrupted enough, they do not need to be scared witless.

Tracey’s children running around at night time hiding behind hedges from a social worker, what! Seriously, I am lost for words! Those poor kids, how did this come about, someone must have told them to run & hide, who would even do that & why, did the social worker want to take the kids into care for such an over the top response to a knock at the door? She then threatens the social worker, not by name, but says, “little do you know what’s coming for you, you haven’t a clue what I have in store for you”. I do hope the social worker sees the livestream.

A meeting on 13th of November, is it a court date or a meeting, it’s hard to tell, she calls it a meeting one minute, court the next, then rambles on about taking it to the highest court in the land, the European courts, but what case is she talking about because she starts on about the last 17 years and she couldn’t see this day coming. I thought it was all about her daughter & is she rich!

Tuning back in, someone was a bigger junkie than her, really?

Tomorrow she is going to give us an insight into her, oh happy days!

Case conference files, evidence unreal, file in police evidence that was never ever used, it’s going to be used now, she calls it her ace card, repeat, it has been pulled?

She’s going to squeal like a birdie in court. Someone’s cushy lifestyles are over.

Again she talks about the social worker having her kids hiding in bushes, then goes on about a Police Officer who is now going to be investigated.

She says she hasn’t broken the ‘non-mol'[sic] orders in her livestream, maybe not Tracey but you have certainly threatened a social worker, not by name but by inference to whatever case they have on you, I am sure someone is joining the dots.

Interesting point about said “non-mol” orders: Tracey and Aaron seem to believe that acceptance of such orders is somehow optional—she claims that they refused to accept them, and that therefore the orders are meaningless.

Compare and contrast with the non-molestation order which Ella Draper took out against her ex-partner RD several years ago: the Hoaxtead mobsters (including Tracey) used this as “evidence” that RD was a Very Bad Person Indeed. If only he’d known that all he had to do was say, “No thanks, I’d rather not accept that today”, and the entire problem would have disappeared!

Of course, RD doesn’t live in Tracey Morris Land. That could explain the discrepancy, we suppose.

Will the real Tracey Morris please stand up?

Tracey claims to believe that those who oppose her ought to be quaking in their boots, presumably due to her fearsome knowledge of the law and her unfettered aggressiveness: 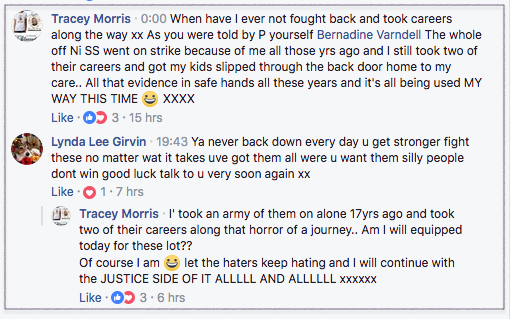 Despite all this tough talk from Tracey, we’ve received several private emails from people who are familiar with her, who don’t hold her in the high esteem she believes she deserves.

She’s a fake, pure and simple. Her complaints and allegations are mostly made up, and she hasn’t done half of what she says she did. She makes out she’s so hard, but she just makes a lot of noise. No one takes any notice of her really.

Look, the amount of lies and incidents she’s been involved in could take a year to document.

But for starters she certainly did not bring down the biggest paedophile ring in the West Midlands [as she has previously claimed]. In fact the first she knew about the solicitor being a sex offender was when police and social workers knocked on her door because she’d been farming her kids out to him and someone else had made a complaint. She had gave her children to a complete stranger to take on holiday and that isn’t even that shocking, she was never used as a witness in the case because she was considered mentally unstable and her daughter was hospitalised shortly afterwards which would indicate the abuse took place in England and not two years previously as she is now claiming. Better still she got compensation for her children being abused after the solicitor was convicted, so why she’s now pretending to be mother earth is a mystery.

A reader notes that while some of Tracey’s Facebook friends may believe her version of reality, they are being taken in:

Word is her younger children have now been removed from her care but she doesn’t want her fan club to know this because it would ruin the pretence that she’s the woman who holds social services to account.

She’s known by every social worker and family court judge in the land as an appalling mother and a pest who tries to prey on vulnerable mothers for money.  She’s never taken anyone’s career, she’s a Walter Mitty, her own family have disowned her, she’s no friends other than the gullible people she picks up on Facebook, tragic really.

And Daisy points out that while Tracey claims to have been the cause of a Northern Ireland social services strike, she was unable to find any reference to her in connection to any strikes at all:

Was she responsible for this strike I wonder:

https://en.m.wikipedia.org/wiki/Ulster_Workers%27_Council_strike in 1974
The Ulster Workers’ Council (UWC) strike was a general strike that took place in Northern Ireland between 15 May and 28 May 1974, during “the Troubles”. The strike was called by unionists who were against the Sunningdale Agreement, which had been signed in December 1973. Specifically, the strikers opposed the sharing of political power with Irish nationalists, and the proposed role for the Republic of Ireland’s government in running Northern Ireland.

or this one http://www.thejournal.ie/healthcare-workers-begin-24-hour-strike-in-northern-ireland-245742-Oct2011/ HEALTH AND SOCIAL care workers in Northern Ireland are staging strikes today to protest over the loss of funding for front-line services.

Funny, I can’t see her mentioned in either of the articles. I think the strike she is boasting about is simply in her head.

But never mind. We’re sure that Tracey will be in fine fighting form when she attends court…erm, that meeting, in the middle of next month. Don’t forget your mouth guard, Tracey!

Errata: Edited to correct the age-group of Aaron Morris. He is not a teen, but is in his early 20s. 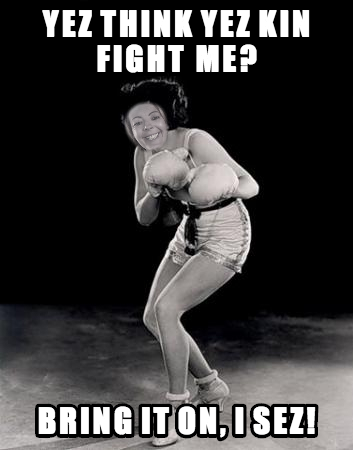