An odd yet entertaining feature of the Hoaxtead mobsters is their strange inability to remain friendly with one another for longer than five minutes at a time. They might start off praising one another to the heavens, but it’s generally a matter of weeks, days, sometimes hours, before they descend into hair-pulling, scratching, and name-calling.

Excessive ego, territoriality, and paranoia are a nasty combination, and most of the Hoaxtead mobsters seem to possess all three in abundance. We’ve found this inevitably leads to entertaining outcomes.

Angela Power-Disney and Tracey Morris have been building up to a mud-slinging crescendo for a few days now, and sales of popcorn and jelly babies have shot up.

It seems to have originated in bitter feelings about the recent Baby H case, which ended with the baby being taken into care. While the mother grieves the loss of both her husband and child, Angela and Tracey are too busy hissing and spitting at one another to notice.

Here’s how it began, on Monday: 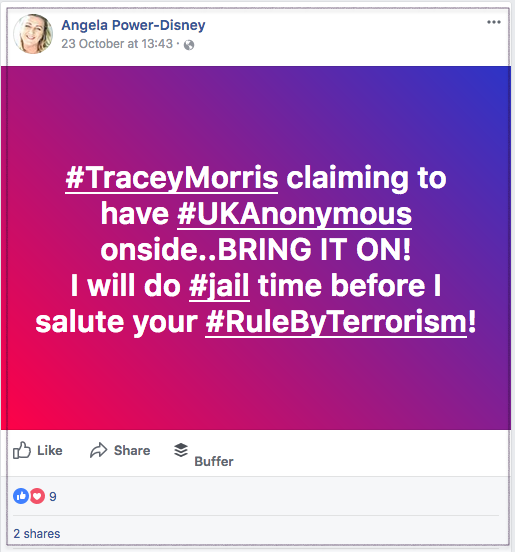 We’re not certain exactly why or when Tracey is alleged to have sicced Anonymous on Angie, but this was Angie’s shot across the bow. We confess we snickered at the thought that she’d be willing to do jail time…. 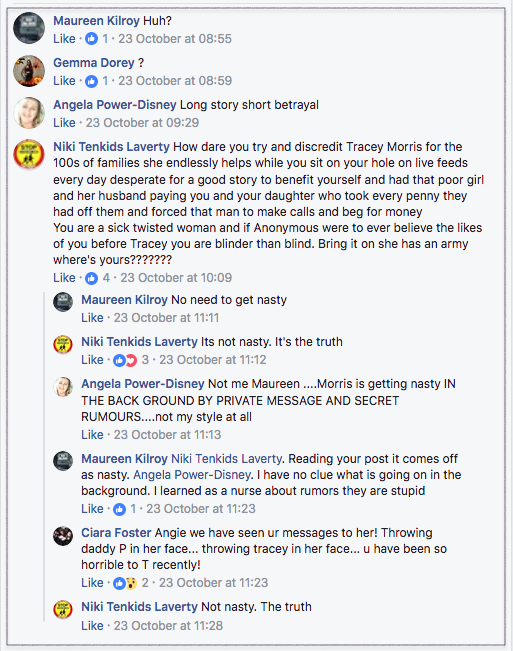 In no time at all, Tracey’s stand-in, Niki Tenkids Laverty had leapt to the attack, accusing Angela (not unjustly) of “sitting on her hole on live feeds every day desperate for a good story to benefit” herself. She accused Angie of forcing Baby H’s mother and father to pay her and her daughter, and of forcing the father to “make calls and beg for money”. Interesting….

Angie slashed back, accusing Tracey of having commandeered the parents’ car in payment for her legal advice and the safe house she’d found them in the south.

She claims that some of the father’s friends tried to get the car back; however, she’s interrupted by the mother: “My mum’s friend went to the house nothing to do with us so that’s not true”. Whoops. 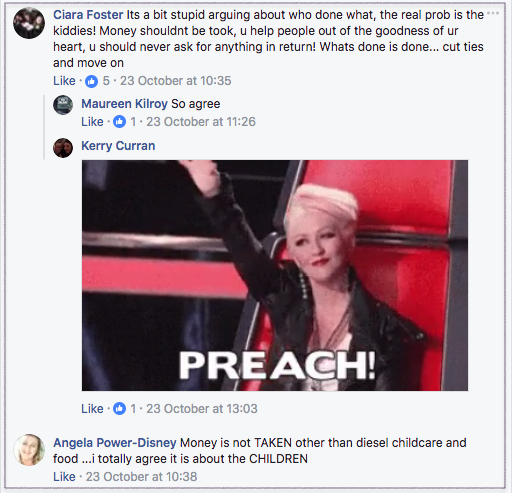 Some of Angie’s friends pitch in, trying to calm the waters, and Angela tries to make her usual claim that “it is about the CHILDREN”. Uh-huh. 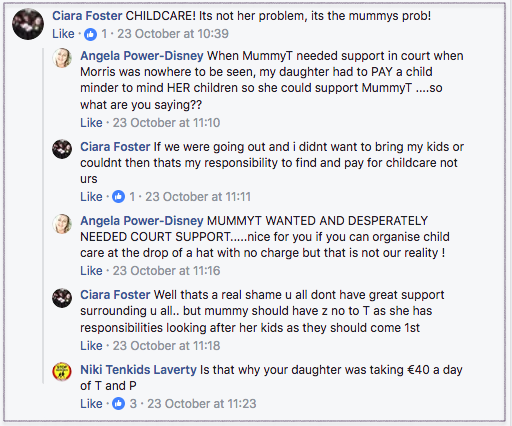 More complaints from Angie about how Tracey (now demoted to “Morris”…ooh, she’s really miffed) was nowhere to be seen when the mother needed support in court. Complaints about having to hire a child-minder…but Niki strikes back: “Is that why your daughter was taking €40 a day of(f) T and P”? Ouch!

Angie claims that Tracey “requisitioned” her current car after she’d recovered a debt by “terrorism and intimidation”; Niki denies this, and claims that Tracey was in fact a saintly figure, driving the couple around to meetings, “never once asking them for a penny”.

Angela goes through a litany of all the sacrifices she and her family made to accommodate the family. Niki isn’t buying it, and claims that not only did Angela charge the couple, but she demanded back the clothing she’d given the mother… 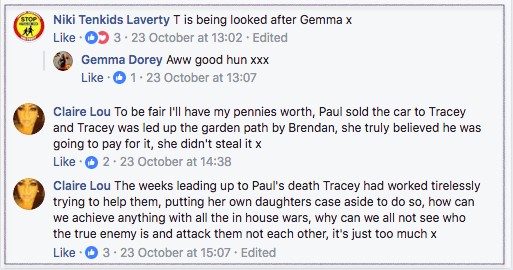 Another county heard from: Claire Lou says Tracey got that car fair and square, and was “led up the garden path by Brendan”, whoever that might be. 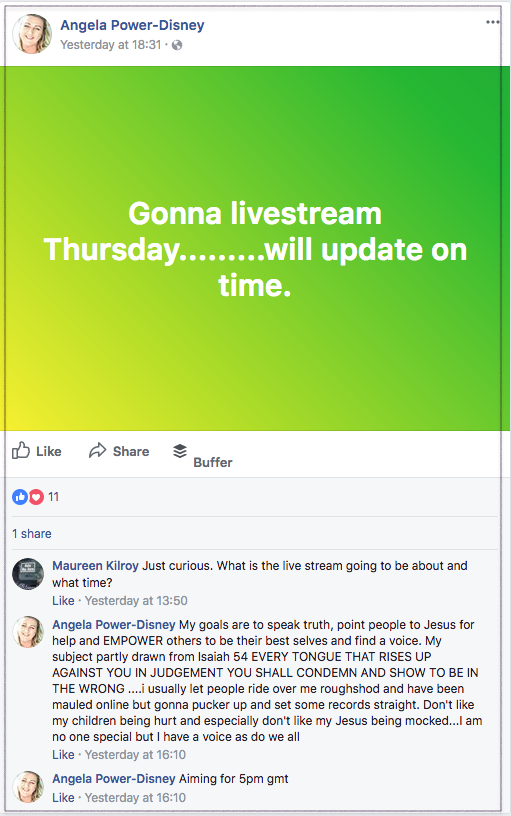 By yesterday, it seems Angela had determined that her strategy would be to do a livestream today, apparently to “set the record straight”…by pure coincidence, on the very day that Tracey plans to hold a demonstration to protest against the hostel where her daughter died. We’re sure Angela would never plan to upstage Tracey deliberately…would she?

We’d have left them to it, except that someone has now posted an apparent threat against Angela and her daughter on YouTube. We would like to state for the record that this came as a surprise to us, and that we had absolutely nothing to do with it, although the video maker seems to have borrowed some screenshots from our comments section.

The video raises many questions. Who made it? Was it one of Tracey’s friends, attempting to intimidate Angela and her family? Was it Angela herself, trying to play the victim card? Was it someone with no involvement in the dispute between Angela and Tracey, simply expressing an opinion?

We have no way of knowing.

All we know is that things are just starting to get interesting, and it’s time to make more popcorn.

121 thoughts on “War of words: Angela and Tracey battle heats up”