Nathan Stolpman travelled all the way from California to London to attend a weekend conference on SRA and “extreme sexual abuse”, only to get cold feet at the last moment; having attended the public speakers’ session on Friday night, he decided that due to his mental state (?) he would skip the remainder of the conference. This left him with a lot of time on his hands, which he decided to use by making a seemingly interminable live-streamed video on YouTube early yesterday evening.

The one bright spot in an otherwise dreary litany of “they put implants in my brain” and “ermagerd, MKULTRA!!!1!” drivel came at the 1:24:20 point, when Nathan received a call from one Raymond Aardvark, a genial and charming chap who identified himself as a sometime commenter on this blog. Perhaps the spouse of the estimable Ethel?

Here’s the relevant clip, so you don’t need to go hunting on YouTube:

It’s the first time we’ve heard anyone with actual common sense attempt to speak with a full-bore troofer like Nathan, and we must say we think Mr Aardvark comported himself very well indeed.

Earlier in the live-stream, Nathan had expressed some concerns that SRA might be over-diagnosed (ya think?), and had noted that memory can be a fragile and easily manipulated thing. “We know you can remember something that your reality shows you is impossible”, he said.

Mr Aardvark picked up on this, and asked whether Nathan had changed his previous stance on SRA, given that his past statements on the subject had been complete bollocks (a term which seemed to confuse Nathan, poor lad).

“I just wondered, since you’ve come over to a more forward-thinking country, whether you’ve changed your mind on anything?” Mr Aardvark asked. Nathan responded that he still believes the stories told by Fiona Barnett and the Hampstead kids; he seemed a bit perplexed when Mr Aardvark pointed out that Fiona Barnett claims to have been raped by several people who died before she was born.

“You’re a professional sceptic and troll, it sounds like…” Nathan responded, which we’re sure was absolutely not his attempt to sidestep an awkward question. “Was someone falsely accused in your family?”

Mr Aardvark noted that while he’d attempted to get GCHQ to pay him for his troubles, in fact he is an amateur sceptic; he said he knows several people who’ve been falsely accused, and that he’s been falsely accused himself as a result of trying to defend those people. In fact, he said one of Nathan’s buddies, whose name we have banned on this site because it only excites him when we mention it, had accused him on various occasions of all sorts of crimes, including rape and child murder.

“[Insert name of banned individual here] gets a little carried away”, Nathan admitted, in what may qualify as the understatement of the year.

“I appreciate you admitting that actually, yeah”, Mr Aardvark said. “I noticed earlier you were saying that you accept that it’s possible for children to be misled into thinking they’ve been abused, which is quite a breakthrough I think, because you’ve not said that before, to my knowledge”.

“Well yeah, I wanted to do my due diligence”, Nathan admitted. He said he’d seen transcripts of the McMartin Preschool case, and that he feels the way the children were interviewed in that case was really wrong.

Mr Aardvark agreed, noting that many of the children have grown up, and now state that they’d been lying.

However, it seems that Nathan wasn’t quite willing to go all the way: “I believe the cult thing is a real thing”, he said, “but I will go so far as to say that yes, it is possible for someone’s memory to be misled, basically”.

“Do you now accept that the whole Hampstead thing was a hoax?” Mr Aardvark asked.

Mr Aardvark replied, “I believe the kids because they came in and said that they’d made everything up under duress, from their documented paedophile child-abusing mum’s boyfriend, Abraham Christie, and there’s even videos of him coaching them to do so”.

Nathan seemed a bit discombobulated at this point, but finally managed to pull a sentence together. “I said that it wasn’t a conspiracy, it didn’t have to be a conspiracy to take away the kids, after what [the little girl] said. She said….”

Mr Aardvark reminded Nathan to please not say the names of the children, and he apologised, then stated that while he believes most of the original story RD’s children had told, he thinks they might have been coached on “some areas”.

Nathan disagreed, claiming that he had “analysed both sets of interviews….at least a dozen times”, and that the retraction is “not believable”.

Mr Aardvark pointed out that Nathan sounded as though he’d been duped by people like Kristie Sue Costa, though Nathan denied knowing who that is. [Kristie Sue will be crushed, shurely—Ed.]

“But a bigger question has been preying on my mind”, Mr Aardvark said. “You said you were going to re-interview Ella, and you said that she’d been in touch with you to say that large parts of what she’d claimed about various people hadn’t happened, and she hasn’t surfaced since then”.

Shaking his head, Nathan denied knowledge of this. “I don’t remember saying what you said I said….”

However, after being reminded of exactly what he’d said, Nathan suddenly regained his memory, and affirmed that Ella had indeed told him that her ex-husband and his family members had not been involved in the alleged cult, and that she’d been mistaken in claiming they had. Memory really does seem to be a fragile thing, doesn’t it?

“It threw the whole story into disarray”, Mr Aardvark said. “It really collapsed her testimony, but we only had your word for it, and we were kind of looking forward to the re-interview”.

Nathan admitted that he had begun to have doubts about Ella, and that he’d wanted to talk to Abe at the same time; however, Abe had refused the interview. Mr Aardvark asked whether Nathan didn’t find it at all odd that the person who had engineered the hoax was now refusing to discuss it in public. “Does that not strike you as suspicious?” he asked.

“Yes, sir”, Nathan said. “Yeah, and that was the reason I insisted on having him on the show”. He also admitted that he believes it was wrong that physical abuse was used in extracting the children’s stories, but stated that he believed the doctor’s report. Mr Aardvark pointed out that there were grave difficulties with Dr Hodes’ report—not only did her diagnosis not confirm the kind or extent of abuse alleged, but when the report was peer-reviewed, she had been forced to revise her opinion. Unsurprisingly, Nathan seemed sceptical of the peer review process, and said he would “have to look into that”. How he would accomplish such a feat is anyone’s guess.

Having been out-argued for several minutes by this time, Nathan resorted to saying, “I’m being pretty generous with you, given that you’re a troll and that you’ve got one particular angle on this…and I’m willing to say to you, that I think there are parts of the boy’s testimony that are probably…that are almost impossible that they would be true. You know, almost a hundred people in a public toilet, for example”. However, he maintained that certain details were too specific to have been “programmed” into the children. [No, but threats and beatings can do wonders for anyone’s memory—just ask anyone at Guantanamo Bay—Ed.]

Mr Aardvark pointed out that although Nathan claims that no children could be coached to tell such detailed stories, many of his followers would assert that various recent disasters involving injured and/or traumatised children are “played out” by “crisis actors”. How, he asked, is it possible to believe both things simultaneously? Nathan responded (again) that he had watched the interviews many times, and that he’d decided which parts were true and which weren’t. And crisis actors are totally a thing.

“I know you’re not a big fan of Hoaxtead Research“, Mr Aardvark began.

Nathan interjected, “I’m a fan, I am a fan! I love Hoaxtead, it’s fun….Hoaxtead Research is run by the UK government, I believe. They want me to think it’s run by RD….”

Mr Aardvark pointed out that the blog is run by “whoever the hoaxers want it to be run by on any given day. One day it’s GCHQ, one day it’s MI5, MI6, RD…everyone’s been credited with running it”.

Asked who he thinks runs it, Mr Aardvark said, “I think it’s run by concerned amateurs like myself”. He pointed out that despite the hoaxers’ claims that it must cost £10,000 per week to run the blog, “WordPress is free”.

Nathan agreed, but said, “It’s just regular old harassment”, and claimed, “they write threatening messages to me, so it’s not exactly concerned citizens, you know what I mean?” [We’re not doing anything of the kind, but don’t let truth and logic get in the way of a good story—Ed.]

Discussion turned to the videos of RD’s children, which Nathan claimed he does not want to re-upload to his channel. “This is all I wanna know, before I upload all my Hampstead videos one more time….I don’t want to put the videos back up on the internet, believe it or not. But first, I wanna know: are the children in a safe place right now, and are they happy?”

“I can’t tell you that, I don’t know that, and it’s none of my business”, Mr Aardvark answered. “That’s the family’s personal business, it’s nothing to do with any of us, quite frankly”.

“Well, I’d ask RD…I’m telling you, I’m willing to take these videos down, and I’m willing to be on your side and say that the videos should be down, if I had some confirmation, and I’d talk to RD, that the kids are in a safe home now and that they’re happy….”

Mr Aardvark took issue with the notion that Nathan and his audience are “very concerned” about the children’s welfare; when Mrs Pauffley’s judgment came down, he said, people were angry and disappointed, rather than overjoyed that the children hadn’t been abused. He called such people “child rape fantasists”; Nathan said he couldn’t believe such a thing existed. [No, but SRA is totes a thing—Ed.]

By way of illustration, Mr Aardvark mentioned Rupert Quaintance’s infamous statement that he’d like to try child rape sometime; Nathan claimed not to believe Rupert had said this. [Note to self: send Nathan that video clip—Ed.]

Nathan reiterated his claim that he’s been threatened by this blog; Mr Aardvark tried to gently differentiate between a polite suggestion that one not break any laws, and an actual threat. “If you’re not doing anything illegal, you’ve got nothing to worry about”, he said, but Nathan seemed unable to grasp the distinction.

Ending the conversation on a cordial note, Mr Aardvark said, “Mind how you go”.

“Was that a code or something?” Nathan asked himself, scratching his head and looking perplexed.

Really, nothing like a battle of wits with an unarmed man. 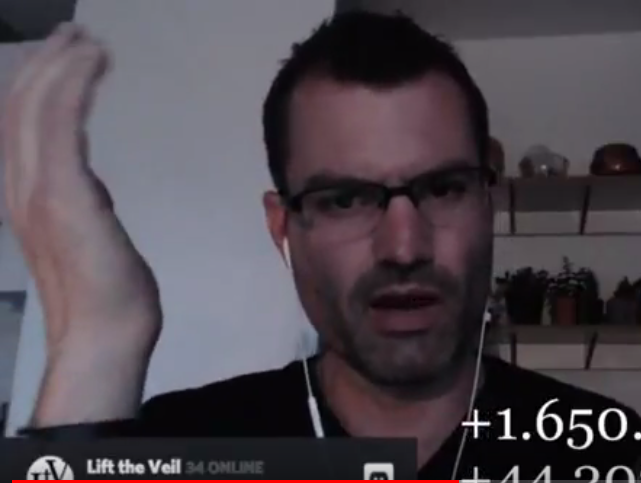