We recently reported that Sabine McNeill’s colleague and “Super-McKenzie friend” Maurice Kirk had been convicted of breaching his restraining order following a four-day trial at Cardiff Crown Court. At that time we noted that the case was listed for sentencing on 17 November.

The day after he was convicted by jury (and we ought to mention, for completeness, that this is the fourth time he has been tried and convicted of breaching the order), Mr Kirk posted on Facebook: 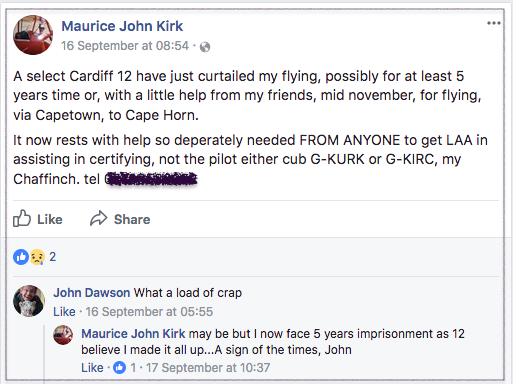 Perhaps we’re being too suspicious, but this sounds an awful lot like someone planning a longish flight, just at the time when he is meant to be attending his sentencing hearing—mid-November.

And odd as it may seem to those of us who are aware of Mr Kirk’s multiple convictions for assault, threats, harassment, and sundry other crimes over the years, he seems to have a number of loyal friends who are willing to stand up for him. For example, Dr Nick Read, who accompanied Mr Kirk to court, and who described his friend as “aviator, adventurer and my old Taunton School friend and climbing buddy”, recently wrote about the trial on his blog, Mindbodydoc.

Maurice sat in the elevated dock to the left at the back of the court almost in touching distance of the jury. He was dressed smartly in a light green hacking jacket, red corduroy trousers and a yellow shirt set off by his red blood-sports bow tie. He had shaved and cut his hair for the occasion. I and three other supporters sat at the same level to the right. …

It is Maurice’s 13th appearance; the courtroom is his theatre and he usually excels – so why spoil a winning combination? Next, Maurice made an application for disclosure of medical records, which was ruled irrelevant and refused together with three further applications for witnesses including the psychiatrist who had falsely diagnosed brain damage. At that, Maurice asked for the case to be transferred to Bristol, where he felt he would get a fairer hearing. This was also refused. Finally, Maurice objected to one of the jurors, who was a doctor and may have known the psychiatrist. Another refusal. Things were not going well, but Maurice was not overly surprised or upset. …

The prosecution case was seemingly very straightforward. A restraining order had been issued to prevent Maurice from harassing the aforementioned forensic psychiatrist for falsifying medical records and the chief officer of the South Wales Police for wrongful arrest and imprisonment. His crime was, as I understand it,’threatening behaviour with an offensive weapon – ‘the machine gun case’. Maurice had purchased a vintage WW1 biplane with a machine gun mounted on the fuselage. He had removed the gun from the aircraft and posted an image on Facebook brandishing the weapon and threatening the South Wales Police. The gun was decommissioned; its barrel was blocked, and Maurice had posted the image as a prank. That, however, did not stop the police from storming his house and arresting him in front of his 10 year old daughter, whom they threatened to take into care to protect her from her dangerous father. A mutual antipathy between Maurice and that police force had smouldered for many years. No doubt they were waiting for an excuse to ‘nail him’.

Interestingly, this is the first relatively coherent explanation we’ve heard of the infamous “machine gun case”.

We confess we are surprised that an educated man such as Dr Read would not grasp that making an image of one’s self brandishing a machine gun, whether decommissioned or otherwise, could be construed as a dangerous threat. Bank robbers have been convicted of armed robbery for waving around unloaded or replica weapons, and we really fail to see the difference in Mr Kirk’s case. How was the target of his wrath meant to tell by looking at the photograph of a scowling Mr Kirk, brandishing a dangerous weapon, whether the weapon was loaded or otherwise?

Loaded or not? You be the judge.

Dr Read mentions Mr Kirk’s MAPPA Level 3 designation, and seems to accept Mr Kirk’s belief that this is merely another example of the police harassing him. Unfortunately, Mr Kirk has at various times published his OASys evaluation, which spells out exactly why he is considered a danger to individuals and the general public. An experienced former court employee has told us it’s one of the most alarming assessments they’ve seen, and we see no reason to disbelieve them.

Breaching the restraining order was perhaps the only means he had of getting his grievances heard and publicised to a wider audience. Apart from the technicalities of whether or not he was properly issued with a restraining order, Maurice’s case is that he had reasonable justification in order to expose criminal activity on the part of the police and the psychiatrist. In other words, ‘they stitched him up’. In that respect, the context of why and how the order was issued in the first place is critically important, but the judge and the prosecution clearly wanted to tackle the simple issue of whether or not Maurice had broken the restraining order.

This sounds to us an awful lot like Sabine-speak: “publicity is the soul of justice”, she proclaimed, immediately before publishing the videos of RD’s children, followed by the list of alleged “cult members”, including personal and contact details.

Just as Sabine and Belinda refuse to believe that their actions injured anyone, despite all evidence to the contrary, Mr Kirk proclaims in this video (which, curiously, seems to have been filmed in the court lavatory) that he’s seen no evidence that his restraining order breaches have caused any injury to the person he’s targetted:

The object of Mr Kirk’s harassment campaign did not testify at his trial; rather, as noted above, the trial focussed on the simple matter of whether Mr Kirk had violated his restraining order. The jury determined that he had.

We are unable to tell what effect Mr Kirk’s multiple violations have had on his victims, but we can say that we’ve witnessed the effects of similar online harassment on the families, teachers, clergy, social workers, police, and business-people named in the Hampstead SRA hoax. It’s not a pretty picture, and we would expect a physician like Dr Read to be aware of this.

Two days after Mr Kirk made this video, he posted, yet again, a “Wanted: Dead or Alive” image of the person he’s been targetting since 2009.

Loyalty towards a friend is an admirable quality, but even the most dedicated of friends should not overlook or seek to excuse reprehensible behaviour. The fact that Mr Kirk has not only hinted that he may be planning to do a runner rather than face his sentencing hearing, and that he has already violated the restraining order for which he was convicted a week ago seems to us clear evidence that he is not planning to mend his ways.

And his friends who seem determined to view him as a “colourful eccentric” and “old climbing buddy” rather than a danger to himself, his family, and the general public are not only being willfully blind, but are assisting him in his path toward self-destruction.

128 thoughts on “Is Maurice Kirk planning a runner? And will his friends help him?”