A few days back, one of our readers mentioned that they’d been looking at videos covering one of the many trials that erupted during the last Satanic panic in the 1980s and 1990s; they recommended a series on the Little Rascals case.

The Little Rascals daycare scandal, although it took place in Edenton, North Carolina, shared elements in common with the infamous McMartin Preschool case in Manhattan Beach, California. Similar factors included hysterical parents, incompetent and misled therapists, and prosecutors eager to demonstrate that they were responding to this new apparent threat: child sexual abuse in the context of child care settings. And the predictable consequences: innocent people were accused, lives destroyed, trust broken, and children forced to make allegations against their carers.

The “Frontline” news analysis show on the PBS television network in the United States produced a stellar series of programmes about the Little Rascals case, titled “Innocence Lost”. The shows are well worth watching, as award-winning producer Ofra Bikel interviewed Edenton residents on both sides of the issue. Here’s the first of four shows, detailing how the case started and gathered steam:

According to journalist Lew Powell, who maintains a comprehensive blog on the Little Rascals debacle, the case began with two seemingly unrelated events:

Brenda Toppin, a dispatcher for the Edenton police department, attended a seminar on “satanic ritual abuse,” and Jane Mabry failed to get an apology from Bob Kelly for slapping her child.

Mabry began a campaign of complaints about Little Rascals, and eventually Toppin became part of a web of gossip, speculation and accusation that came to include parents, police, therapists and prosecutors.

In 1989 Kelly and six other defendants were charged with child sexual abuse.

Testimony of 12 children, who after months of intense questioning by parents, investigators and therapists had produced the sought-after claims of abuse. All documentation of the initial interviews, in which the children denied ever having been abused, was lost or destroyed.

On that last point, Bart Mills reported in July 1993 in the Chicago Tribune:

“The authorities in North Carolina, who I know met with the McMartin prosecutors, learned from them that the therapists’ notes should just be summaries,” Bikel continues. “They learned that if you want to win a case, it’s a bad idea to have tapes around.”

In the McMartin case, the defense used the videotapes of therapists’ interviews with the children to suggest that the idea of abuse had been implanted in the children’s minds by their interviewers.

In the documentary, the prosecution interviewer [Brenda Toppin] is shown testifying that she cannot say why her original interview notes were destroyed: “It’s just a lot of extra paper,” she said.

However, in an interesting twist, a portion of one of those interviews turned up after Bob Kelly had been convicted in 1992 of 99 counts of sexually molesting 12 children, and sentenced to 12 consecutive life terms.

Ms Toppin did not bring any record of her interviews to court….She testified however that she used appropriate interview techniques, did not lead the children, and used the anatomical dolls in a professional and non-suggestive manner. The transcript reveals that contrary to Ms Toppin’s testimony at trial, at least some of her interviews were recorded and then intentionally destroyed. It also reveals that Ms Toppin’s interviews were not only suggestive, but coercive to the point of brutality. The child’s crying and pleas to stop are met only by Ms Toppin’s promise to stop when the child said what she wanted to hear. The tape also makes it clear that it was Ms Toppin, not “Child No. 5”, who manipulated and touched the dolls.

The transcript of the interview with “Child No. 5” fully bears out these statements: 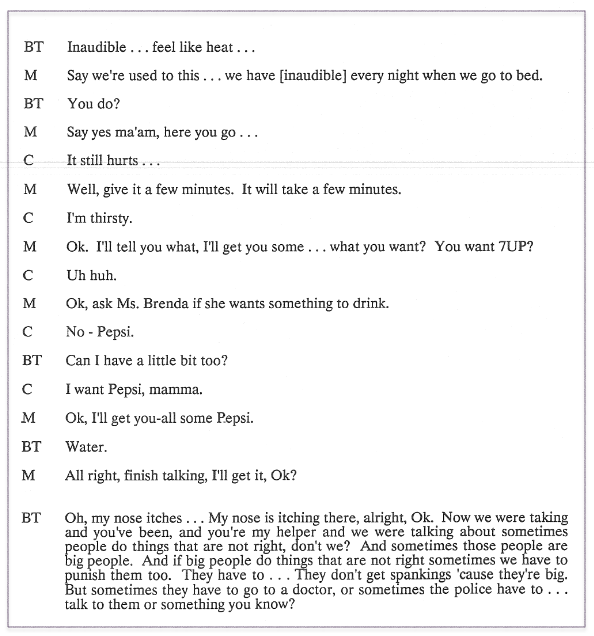 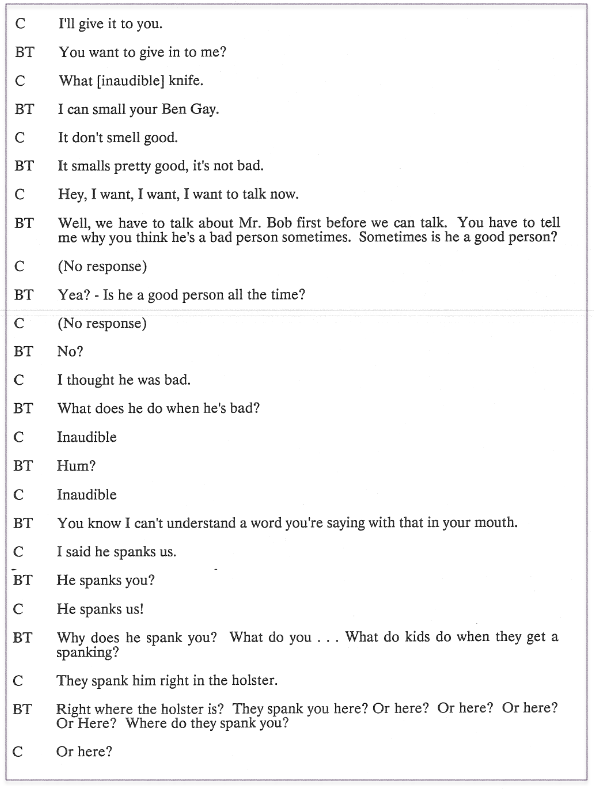 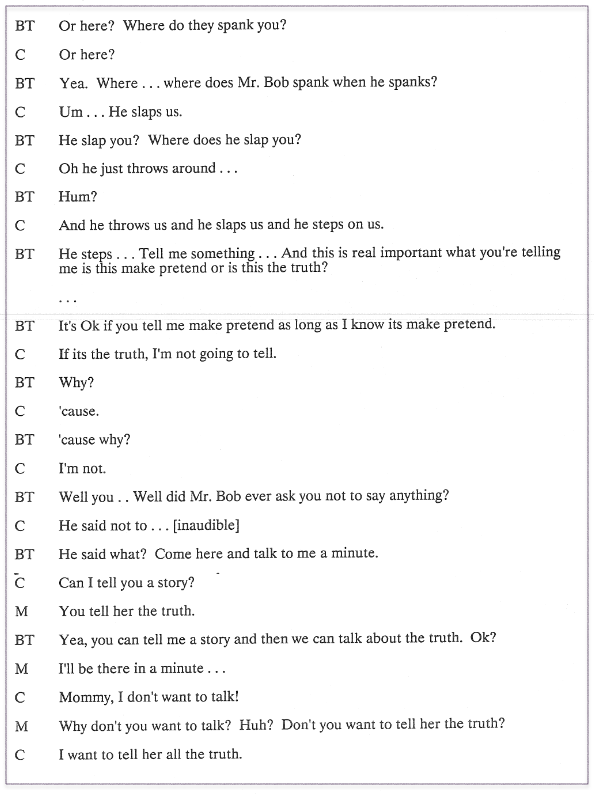 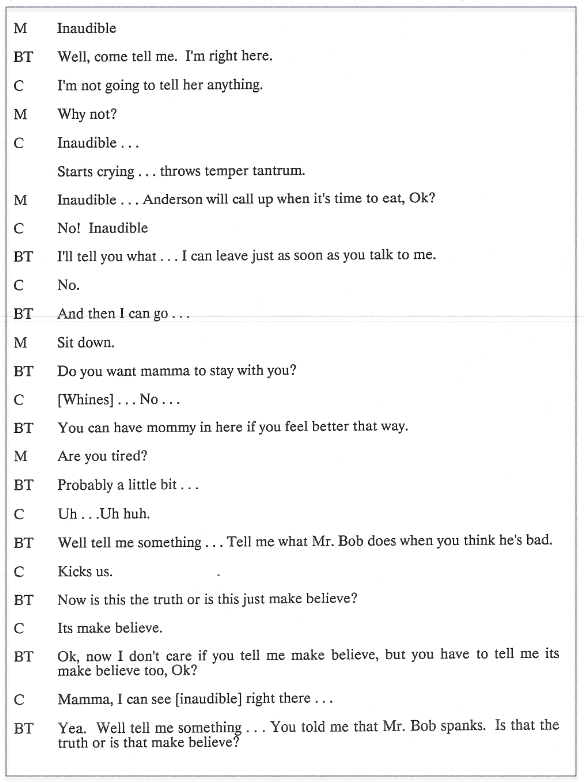 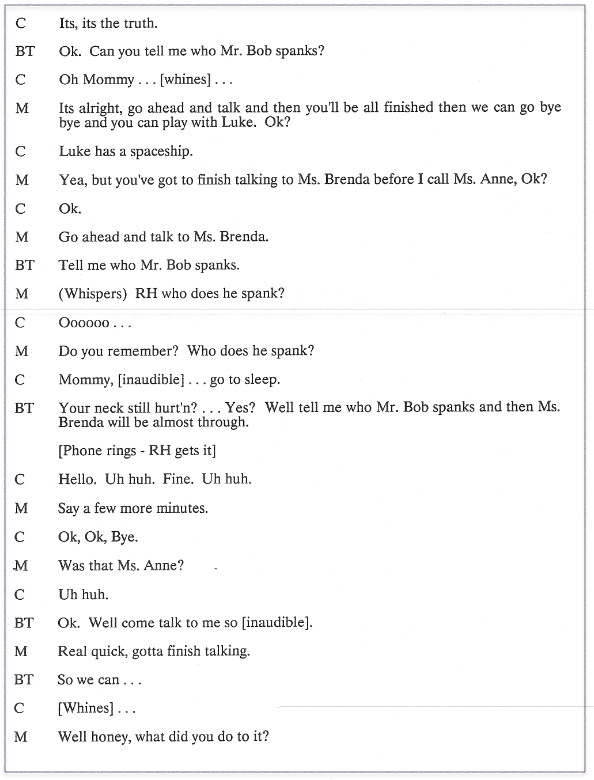 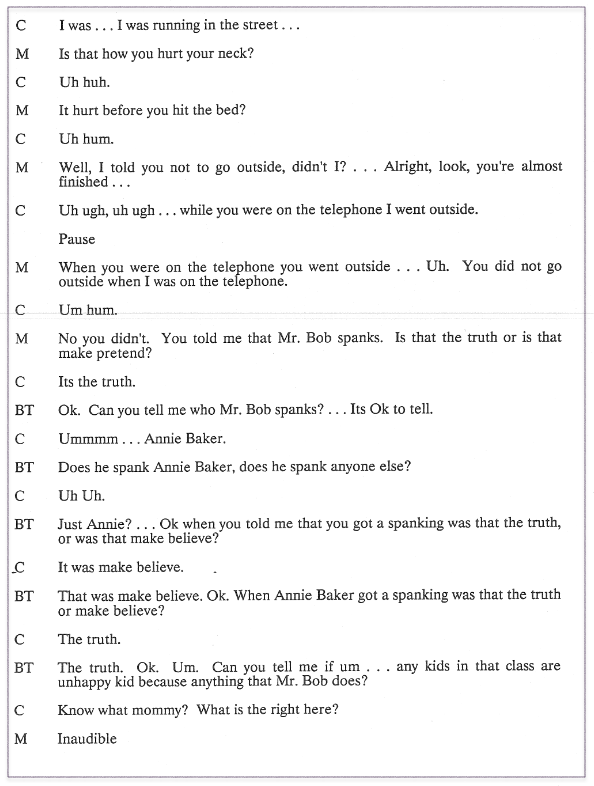 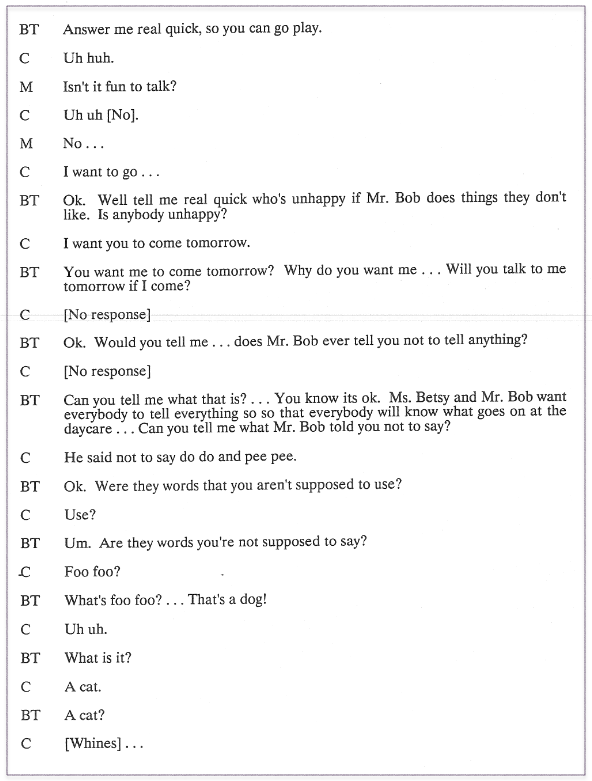 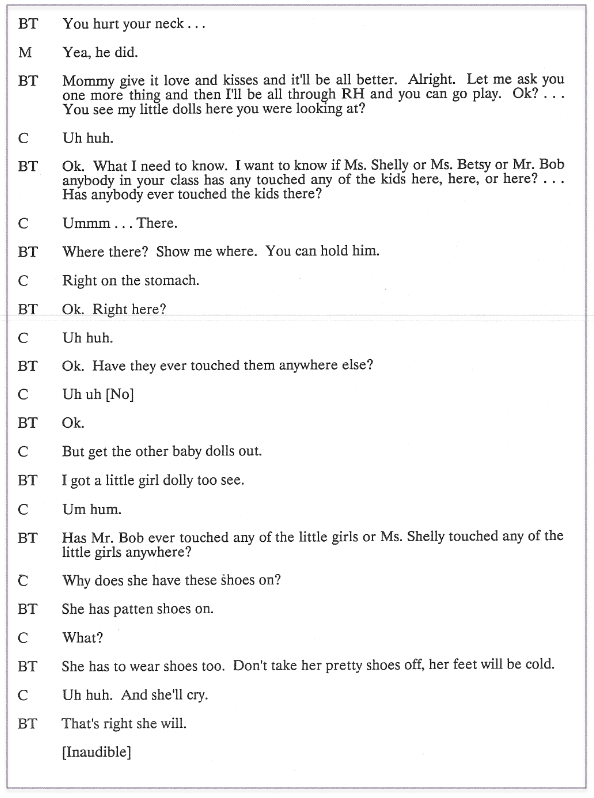 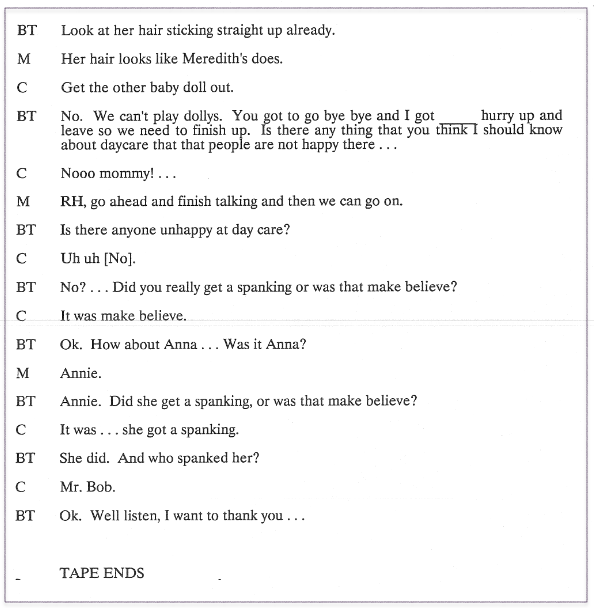 All we can say is that it’s a good thing Ms Toppin didn’t have access to any metal spoons during that interview.