On a scale of 1 to 10, with 10 being “shocked to your very core, may never recover”, how surprised are you that Angela Power-Disney has not just continued to violate the confidentiality and privacy of a couple currently fighting to keep their baby, but has posted photos and further details of their case?

Yesterday she posted a picture of the couple with their baby, making no attempt to disguise their identities, and she has plastered their names all over her Facebook page, along with details of their case:

Yes, that’s Angie saying that she doesn’t care what the law states; she is a law unto herself, thankyouverymuch.

Interesting, by the way, that she seems to be taking her cue as a sometime-McKenzie friend from that ultimate MKF failure, Sabine “Never won a case yet” McNeill. In fact, the article she links to is one of Sabine’s clever “outsmart the social services” attempts, penned by that “veteran of all McKenzie friends”, Ian Josephs. Make of that what you will.

The mainstream media has its uses…

Not content with doing what she could to alienate the courts and Child and Family Agency against the couple she is ostensibly “helping”, Angela not only attempted to flog their story to Irish journalist Gerry Hand, but then published the contents of her private conversation on Belinda’s Facebook page: 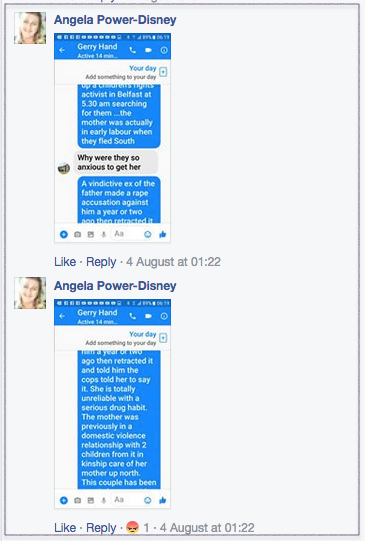 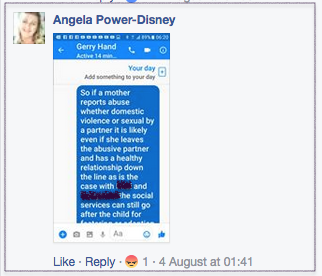 Gerry Hand: Is that case in Monaghan today Friday?

APD: Yes
Hospital staff on maternity ward in Cavan General Hospital writing letters of support. the mother was reported missing all over the media in Northern Ireland and police PSNI boards etc. then reported found…this is huge Gerry

PSNI bashed door down of father up north and knocked up a children’s rights activist in Belfast at 5:30 a.m. searching for them … the mother was actually in early labour when they fled South.

GH: Why were they so anxious to get her?

APD: A vindictive ex of the father made a rape accusation against him a year or two ago then retracted it and told him the cops told her to say it. She is totally unreliable with a serious drug habit. The mother was previously in a domestic violence relationship with 2 children from it in kinship care of her mother up north.

This couple has been married a year with no issues. Confidentially I took them in and under extreme pressure they were nothing but united and loving as confirmed by maternity staff.

GH: Keep me posted as to the outcome of the case

APD: Social Services in Lisburn planned to take the baby at birth…

You can’t make it to MONAGHAN?

So if a mother reports abuse whether domestic violence or sexual by a partner it is likely even if she leaves the abusive partner and has a healthy relationship down the line as is the case with Xxxx and Xxxxxxxx the social services can still go after the child for fostering or adoption targets.

Mr Hand quite wisely did not commit to anything; he is most likely aware, as a journalist, that attempting to cover a case like this would be a one-way ticket to a contempt of court charge.

Again, we were interested to note certain motifs that appear to have drifted over from Belinda and Sabine’s approach to the business of ensuring that parents are separated from their children: “adoption targets”, “incentives”, “corrupt social workers”, “fostering is a money-making industry”, and so forth. Also of interest: the “children’s rights activist in Belfast”, whose name may or may not be Tracey Morris. Hmm.

We don’t know enough of the details of this case to hazard a guess as to how it ought to turn out; that will be for the courts to decide, and we sincerely hope for everyone’s sake that they act with wisdom and compassion. What we do know is that choosing Angela as a “helper” in the case is a terrible mistake. Angela is interested in nothing but her own puffery and narcissistic supply; she isn’t doing this out of the goodness of her heart, but as yet another stepping stone to the fame and glory she thinks she deserves. We hope the parents realise this sooner rather than later.