The other night, one of our readers kindly drew our attention to a rather interesting feud taking place on a Facebook group dedicated to the care and feeding of convicted paedophile Peter Hofschroer. It seems that Belinda McKenzie has taken it upon herself to shelter Mr Hofschroer whilst he awaits extradition. On Saturday she posted this:

Someone we’d never heard of, Lynn Sadington, picked it up from there: 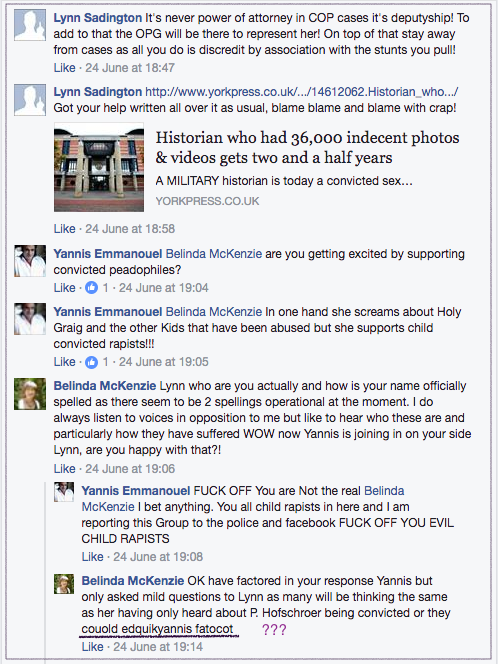 Belinda seems to lapse into some hitherto unknown language at one point…anyone know that that’s meant to say, other than, “It’s well past gin o’clock”? Answers on a postcard please. 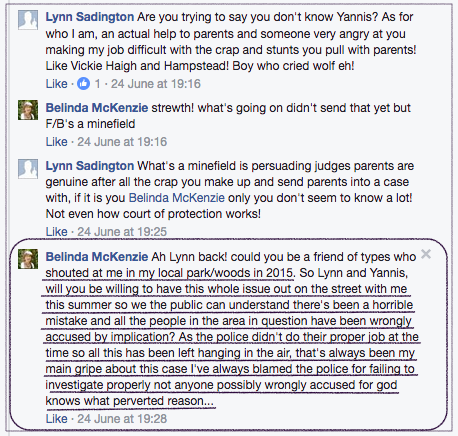 So yes, it appears that Lynn has challenged Belinda to a duel of sorts, which is interesting in itself.

But what we find even more fascinating is Belinda’s response above:

Could you be a friend of types who shouted at me in my local park/woods in 2015….(W)ill you be willing to have this whole issue out on the street with me this summer so we the public can understand there’s been a horrible mistake and all the people in the area in question have been wrongly accused by implication?

Whoa. Let’s pause on that.

Belinda’s reference to the “type who shouted” at her in her “local park/woods in 2015” is clearly a shot in the direction of the Hampstead parent who (quite justifiably, in our estimation) confronted Belinda in Highgate Woods in early July 2015. Here’s a firsthand account of what actually happened:

I bumped into Belinda McKenzie in Highgate Woods….I always wondered what I would do if I saw her. I didn’t have very long to think about it as my primal instincts kicked in. I called her by name and then launched into her. The whole playground heard me. Her son stood by in silence not once asking me to refrain from calling her a disgusting woman who has destroyed innocent people’s lives. When I asked him directly if he knew the danger she had put us in he feigned complete ignorance. She asked me to move away from the children to have a more private conversation. I refused stating she had not stopped to think of other people’s families and I was not going to spare hers the truth of her evil actions. She backed down on every issue like a cornered rat. Denied ever being involved in implicating the parents, stating she only aimed at the children’s father.

I called her a liar and quoted all the the things she has put on her blog inviting vigilantes to investigate those named. She seemed shocked that I could quote her ad verbatim. I told her I had read every libelous comment and watched every video where she spouted her evil lies. I informed her that everything was saved and with our lawyers. She asked me to meet to discuss things to which I refused stating it was too late. She excused herself saying she was helping a mother. I added a “mother who had tortured her kids into lying”.I stated my children were there and did she want to question them to see if they had been abused. She was horrified. I told her she was a dangerous, despicable human being who didn’t care about the truth and only promoted hoaxes.

I told her the devastation she had caused a whole community who had been targeted by vigilantes due to her lies. My partner told her we had received death threats. She denied anything was linked to her. I pointed out that she was head of McKenzie friends at the relevant time, and basically controlled Sabine and Neelu. She denied it. I said I’d heard her recent call to arms at the rallies to investigate Hampstead; again she said the father not the parents. I was visibly upset and shaken and she was mortified by the very public humiliation. I told her exactly what I thought of her and how the false allegations she had made against us were the worst kind any parent could be accused of. My partner told her she was totally insane and I just kept calling her a disgusting human being.

I pointed out the harm she has done to our children by sexualising and naming them, giving the paedophiles of the world their addresses. It was as if this had never occurred to her! She just kept trying to wriggle out of every responsibility. Saying she was helping children. I laughed at the suggestion she had ever helped anyone but her own self-promotion. I pointed out she wanted people to come forward and say they were innocent and that was what I was doing. Don’t think she ever expected to be confronted in such a public way. The teenagers looked horrified at what I was saying about her being a dangerous disgusting woman who had ruined innocent people’s lives and put children in danger. I have informed the police of my encounter where I did not swear or issue a single threat apart from a legal one. I have two lawyers as witnesses. Knowing her she will complain she was harassed—ha ! Funnily enough she hasn’t talked about meeting me on her daily blog yet!

Apparently Belinda was quite shaken by the encounter, but did that stop her from referring to the parents, children, teachers, clergy, and business-people of Hampstead as “Satanic paedophiles”? It did not.

She spent that summer attempting to rally the troops to continue harassing the people of Hampstead until she was finally shut down by an injunction, served during Ella’s appeal at the Royal Courts of Justice, where Belinda and Tracey were outside, megaphones in hand. Belinda high-tailed it to France, but eventually returned when she felt the coast was clear. She’s spent the past two years quietly egging the Hoaxtead mobsters on, careful never to get her own hands too dirty.

Now. Where were we? Oh, yes…Belinda’s challenge:

(W)ill you be willing to have this whole issue out on the street with me this summer so we the public can understand there’s been a horrible mistake and all the people in the area in question have been wrongly accused by implication? As the police didn’t do their proper job at the time so all this has been left hanging in the air, that’s always been my main gripe about this case I’ve always blamed the police for failing to investigate properly not anyone possibly wrongly accused for god knows what perverted reason…

Hang on, hang on. Back the truck up a bit. Do our glasses need cleaning, or are we really seeing Belinda claim that Hoaxtead was “a horrible mistake”, that the people of Hampstead were “wrongly accused by implication”, and that it’s really all the fault of the police?

We’ve turned this one over and over, looked at it from every possible angle, and we can come to no other conclusion than that Belinda, who was one of the driving forces behind the Hampstead SRA hoax in the first place, has suddenly and inexplicably made a complete U-turn.

Could it be an imposter?

Our first thought was, “Is this really Belinda?” and apparently we weren’t the only ones. However, as if to quell any doubts of authorship, Belinda posted the following on her Facebook page yesterday:

Not that we would ever hold Angela up as a reliable source of information, but she claimed yesterday morning that she’d received the same message from Belinda via email…so for the time being we are accepting that it’s the same Belinda.

If so, what could possibly have made her declare that the people of Hampstead were wrongly accused?

At first we wondered whether she’d caught wind of Ella’s sudden about-face on the issue of Mr and Mrs Draper and her eldest son. While that’s an outside possibility, we suspect that the reason for Belinda’s surprising statement has more to do with concern for her own welfare:

We reported in late March that Belinda had been arrested—a surprising turn of events for a woman who until that point had seemed to be coated in Teflon—but we heard shortly afterward that charges had not been laid. However, if Belinda is worried that she (and two others) might be facing serious charges this autumn, the realisation that her lies and manipulations could be coming home to roost might have put her in a more…flexible frame of mind.

As in the encounter in Highgate Woods, it seems that when push comes to shove, Belinda is not nearly as steadfast as she would have her friends and followers believe. Perhaps “cornered rat” really is the most apt description.

72 thoughts on “Has Belinda crossed the floor on Hoaxtead?”